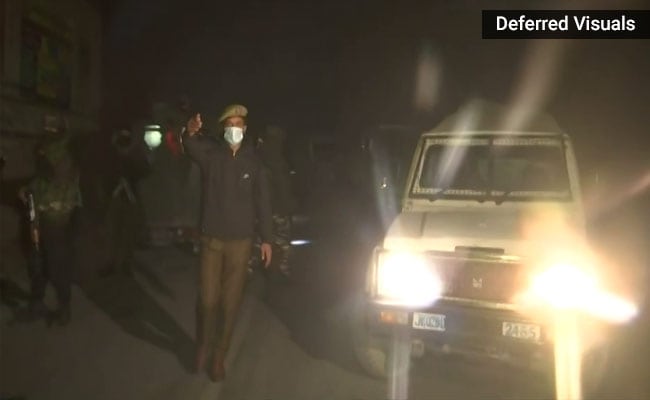 Three armed police from Jammu and Kashmir died and 11 were injured after two terrorists attacked a police bus near a police camp in Zewan on the outskirts of Srinagar last night, police said. . While 2 police officers died last night, one succumbed to his injuries this morning.

One of the fallen police officers is a deputy sub-inspector and another a section police officer. The injured were transferred to hospital where the condition of some is believed to be critical.

The terrorists used heavy fire at the bus in the highly secure area which houses several camps of various security forces. The incident took place in the Zewan area.

The area was cordoned off and a search operation launched to track down the attackers.

PM @Narendra Modi asked for details of the terrorist attack in Jammu and Kashmir. He also expressed his condolences to the families of the security personnel who were martyred in the attack.

Former Chief Ministers of Jammu and Kashmir Omar Abdullah and Mehbooba Mufti also offered their condolences to the bereaved families. While Mr. Abdullah “unequivocally condemned” the attack, Ms. Mufti attacked the Center for a “false narrative of normality” in Kashmir. â€œThe Indian government’s false narrative of normalcy in Kashmir is exposed, but there has been no course correction,â€ his tweet said.

Terribly sad to learn of the attack in Srinagar in which two policemen were killed. The Indian government’s false narrative of normalcy in Kashmir is exposed, but there has been no course correction. My condolences to the bereaved families.

The attack comes days after two police officers were killed after terrorists opened fire on a police team in the Bandipora district of Kashmir. Two policemen were seriously injured and were transferred to a hospital where doctors declared them dead on arrival. The incident took place at Gulshan Chowk in Bandipora on December 10.

This is the second major terrorist attack in the valley after the recent wave of targeted attacks against migrant workers and members of Kashmir minority communities. All of the terrorists behind the targeted killings have been killed in a series of clashes over the past two months, police said.