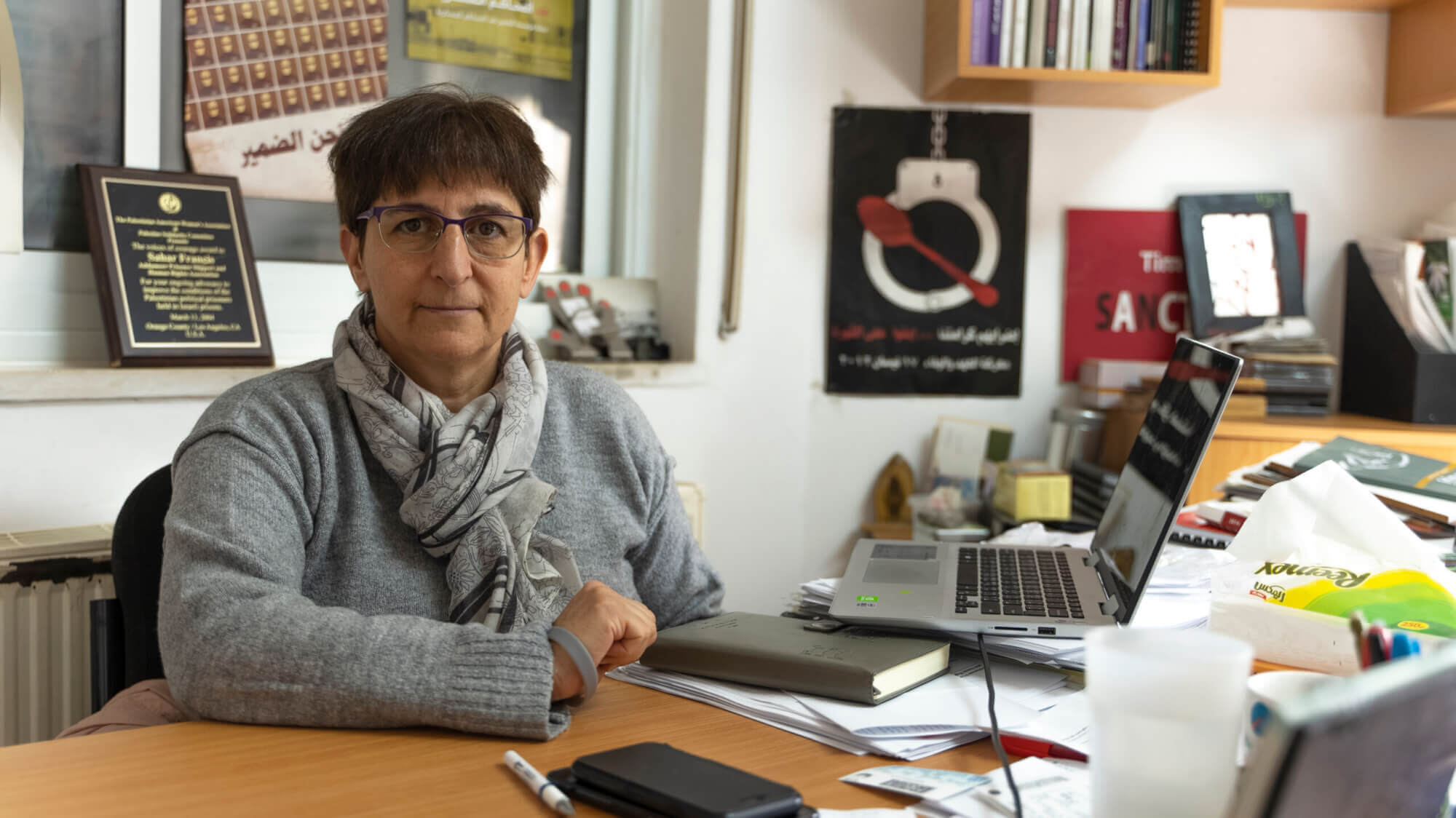 In a small office near downtown Ramallah, a melting pot of staff, of all ages, genders and backgrounds, enter and leave their workspaces. Some staff are chatting over lunch, while others are sitting at their computers or browsing through files at their desks.

It’s a typical office scene that can be found almost anywhere in the world – books line the shelves, while art posters and the faces of the clients they’ve helped cover the walls.

Any foreigner who might enter the office, belonging to Addameer, the leading Palestinian prisoners’ rights group, would be surprised to learn that staff members in front of them risk being arrested at any time by Israel, which considers the ‘organization they work to be a “terrorist institution”.

Addameer, along with five other Palestinian civil society organizations, was named by Israel as a “terrorist institution” in October, with the government saying the groups had links to the Popular Front for the Liberation of Palestine (PFLP) and paid him money. The PFLP, a Marxist-Leninist group, which, like several other Palestinian political factions, is considered by Israel to be a “terrorist organization“.

The move, aimed at criminalizing the work of the six organizations and reducing their international funding, has drawn widespread condemnation from human rights groups around the world.

Despite the hindsight against the decision, Israel has refused to provide concrete evidence for its claims. In November, the Israeli military commander in the West Bank issued five separate military orders prohibiting the organization’s work in the occupied territory, effectively authorizing their imminent closure, the seizure of their assets and the detention of their personnel.

“It has been a very stressful time here,” said Sahar Francis, Director of Addameer. Mondoweiss from his office in Ramallah. “This is all very scary and has definitely affected the minds of the staff,” she said.

“But that’s what Israel wants,” she said. “They’re doing all of this to shut us up and shut us up, and get us to the point where we’re going to give up and say ‘it’s not worth it.’

Francis and his team are part of a network of Palestinian human rights defenders working to defend the rights of Palestinian prisoners in Israeli jails, who now number 5,000.

At the grassroots level, Addameer works to serve Palestinian prisoners, who have been imprisoned by a military system that has a conviction rate of over 99%. The group conducts visits and legal consultations for prisoners, monitors and documents violations committed by the Israeli prison administration, in particular torture and ill-treatment of prisoners, and advocates for the rights of Palestinian prisoners internationally.

The group also conducts training and awareness programs for the local community, students and children – anyone who may be arrested and imprisoned by Israel.

For 30 years, the group has defended the rights of prisoners under occupation and has become a pillar of the local community and the international human rights community in the process.

So why, after 30 years of work, would Israel want to criminalize the group?

“The attacks on our organization didn’t just start with the designation,” Francis said, adding that the October decision was the last step in a long course of state-targeted harassment against Addameer and others. Palestinian NGOs.

“The campaign against us has been going on for many years: harassment, smear campaigns, defamation, dissemination of false information about us by various groups such as the NGO Monitor, UK Lawyers for Israel and other right-wing Israeli groups,” he said. said Francis.

The main objective of previous smear campaigns and the group’s recent criminalization, said Francis, is “to affect our work by affecting our reputation.”

The main target of such campaigns, she said, are international donors and partners who fund and support groups like Addameer.

“By attacking our donors, they hope that the donors would be terrified and cut our funds, and through that, they could prevent us from doing our daily work,” Francis said, adding that the group’s latest designation as a “terrorist organization” was the culmination of previous unsuccessful attempts to curtail international funding for groups.

“As not all of their campaigns had worked before, they came up with the designation,” she said. “The policy behind all of these attacks is actually to terrify donors, and terrify those who invest in civil society in Palestine. “

“Israel’s message to the international community that supports the Palestinian people is: do not dare to come and implement your plans here.

Other important institutions like Al-Haq, Defense for Children International – Palestine, Bisan Center for Research and Development, Union of Palestinian Women’s Committees and Union of Agricultural Working Committees join Addameer on the list of prohibited organizations.

For Francis, the reason Israel chose to target the six organizations is clear: by criminalizing Palestinian civil society, Israel can continue to change the facts on the ground, without having to answer for its violations of international law.

“Organizations like the Agricultural Works Committee, for example, deal with land construction and support for Palestinian farmers, especially in areas where Israel seeks to confiscate and annex land, such as the Jordan Valley and the C, ”said Francis.

“These are very sensitive areas that Israel wants to control, so of course this organization would be under attack.”

Addameer, Al-Haq and DCIP emphasized international advocacy and provide reports and documents on Israeli violations to the ICC and other international bodies, in order to hold Israel accountable for its crimes in the occupied territory. .

“We insist on accountability and that we must use all the tools offered by international law at the level of the United Nations and other platforms to ensure accountability,” Francis said. “Then of course we would be attacked for this job.”

“Israel doesn’t want anyone to say no to their plans, or document their violations and bring them to the ICC so that they can be held accountable for the war crimes they commit on a daily basis,” Francis continued.

“The fact that they are trying to silence us has to do with all of this.”

What is happening now?

Following the attack on the six organizations, the groups launched a # StandWithThe6 campaign, calling on their supporters to show solidarity with the six Palestinian human rights organizations and demand a reversal of the Israeli decision.

Despite a strong response from other human rights organizations and civil society groups, organizations were disappointed with the reaction, or lack thereof, from major actors such as states. United and the EU.

While the EU has stepped up its support for Palestinian civil society, individual states have not denounced the designation outright, and the US has remained relatively silent on the issue, refusing to take a position.

“I think this silence is very bad and dangerous, not only against Palestinian civil society but against the entire human rights movement in the world,” she said.

“The United States has a very important role in this issue. If the United States is not going to take a very clear position in rejecting this decision, it is at the very least a silent message to the banking system: “you can do whatever you want, you can freeze the accounts, it is not our business “”, François declared.

Francois warned that while the “terrorist” designation started with the six organizations, it will not end with them.

Despite the continued pressure organizations face and the looming threat of their closure and potential arrest, Francis said she and Addameer staff will continue to push.

“Not just because of the prisoners, but because of the self-determination of our people. Our struggle for justice and dignity is worth the high price we could pay as individuals, ”she continued.

“At the end of the day, we are not alone. The support of our friends around the world and grassroots organizations all over the world also gives us hope that one day justice will truly come. The occupation cannot last forever. No, it will end.

BEFORE YOU LEAVE – Stories like the one you just read are the result of years of efforts by activists and media like us supporting them by spreading the word, slowly but relentlessly.

It is not a coincidence. Our work has helped create breakthroughs in the way the general public understands the Palestinian struggle for freedom.

Mondoweiss is playing a key role in helping to change the narrative around Palestine. Will you donate so that we can continue to tell in 2022 the stories that will change the world in 2023, 2025 and 2030?