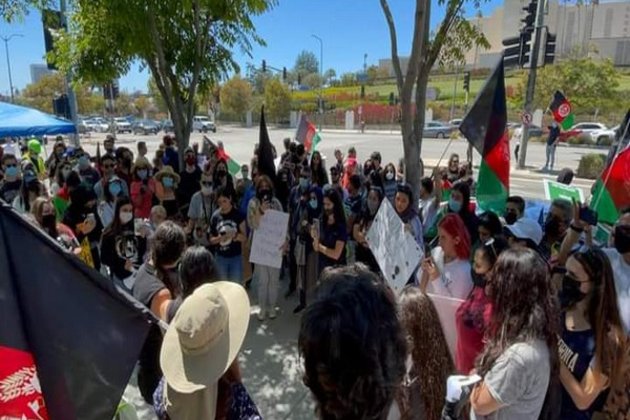 Washington [US], Aug 7 (ANI): Afghan women in Los Angeles demonstrate against Taliban brutality and crimes against humanity in Afghanistan as foreign forces withdraw from war-torn country.

Afghanistan is witnessing a massive upsurge in violence as foreign forces withdraw from the country.

The Taliban have stepped up their attacks on civilians, the Afghan defense and security forces.

Several cities in Afghanistan have fallen to the Taliban in recent weeks and fighting in several others has intensified as the terrorist group attempted to take control.

Recently, the United Nations Assistance Mission in Afghanistan (UNAMA) said the number of civilian casualties in Afghanistan in the first half of 2021 reached record levels with more than 1,659 people killed and 3,254 injured.

Earlier on Tuesday, multiple explosions and sporadic gunfire were heard in the city of Kabul, near the residence of the acting Afghan Minister of Defense, General Bismillah Mohammadi.

According to Afghan media, the explosions were due to a car bomb attack. However, the Taliban later claimed responsibility for the attack.

However, the acting Afghan defense minister later informed that he and his family were safe after a “terrorist attack” on his residence in Kabul.

In recent weeks, Afghanistan has seen an upsurge in violence as the Taliban stepped up its offensive against Afghan civilians and security forces with the complete withdrawal of foreign forces within weeks. (ANI)