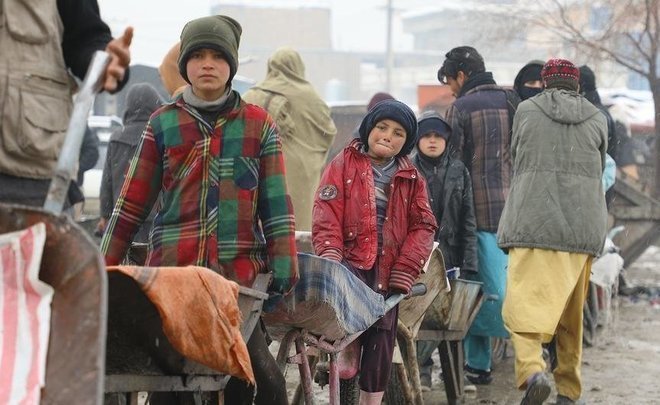 Afghanistan is hanging by a thread, UN Secretary General Antonio Guterres said last week. After the Taliban* came to power, according to him, the country is sinking even further into a humanitarian crisis. Guterres urged the global community to help Afghans, otherwise this region and the whole world will have to pay a higher price. In another article for our newspaper, the columnist of Realnoe Vremya, expert of the Center for Research on the Islamic World, Karim Gaynullin, assessed the scale of the crisis that Afghanistan is going through.

What freedom of choice can a person at risk of dying from malnutrition have?

Since the Taliban* came to power in 2021, Western media have consistently blamed the government that took control of Afghanistan. These accusations are partly true, they are partly absurd too. They include authoritarianism, anti-democratic politics, violation of women’s rights.

At the same time, the country is on the verge of a humanitarian and food crisis. It might seem that the famine in Eurasia in the 21st century is possible when the development of agricultural sciences has made it possible to create more sustainable types of food plants? Nevertheless, a crisis is looming for Afghanistan.

Therefore, all the rhetoric about democratic and anti-authoritarian politics sounds like a propaganda poster. What freedom of choice can a person at risk of dying from malnutrition have? Any hungry person would be happy to trade their right to choose who will preside somewhere in Kabul for a handful of rice. What inclusive government can there be in such a country?

As for women’s rights and Afghanistan, Western scholars, including post-colonial feminists, coined the term imperial feminism long ago. This is a situation where rhetoric about women’s rights is used as justification for neocolonial and imperialist politics. Research Sara R. Farris called this femonationalism in her book, while Rafia Zakaria wrote an article with an explicit name White feminists wanted to invade | The nation. I remind you that the “protection of the rights of Afghan women” was one of the formal causes of the American invasion of Afghanistan. First Lady Lora Bush affirmed this by saying that the “liberation of Afghan women” was the cause of the war, washingtonpost.com.

Any sane person may wonder how military devastation and the total destruction of all infrastructure can promote women’s rights in Afghanistan? Especially when this devastation has been going on for decades.

It is followed by a complete global economic blockade and a freezing of Afghan accounts, which we will discuss later.

There is a food crisis in 21st century when the West insists on giving women the opportunity to go to school. The Taliban have therefore confirmed that they are not against the education of women, but can the hungry use this right?

Poverty and hunger violate women’s rights as much as religious fundamentalists. We know this perfectly with the example of a flow of prostitutes from post-Soviet countries to the West in the 90s. Did they choose such a destiny for fun? Is it sexual emancipation or economic coercion?

It is well known that when Soviet Union troops invaded Afghanistan in the 1980s, dissatisfaction with the war was part of the general dissatisfaction with power, but this was only discussed ‘behind the scenes. During this war, the United States easily took advantage of the possibility of defeating its geopolitical rival in a humiliating way by trying to drag out and intensify the damage done to the Red Empire. Balabanov described when Soviet society faced a psychological ordeal in his legendary film Freight 200. The zinc boys metaphor joined the cultural pattern becoming a sore point that artists addressed 40 years later. The Americans mainly relied on the local mujahedeen funding them and helping them in any way they could. The various funds of Islamic countries have not remained on the sidelines. Well-known terrorist Osama bin Laden later complained about this in one of his interviews to the Saudis saying that when they waged war on the Union they were warriors and defenders of the Islam, but when they waged war on America, they became Kharijites and murderers.

The chaos that followed the destruction of the pro-Soviet government in 1992 led to the rule of the other young Taliban group named because the backbone of the movement was made up of religious schools in Pakistan presided over by its Mullah Muhammad Omar.

After easily coping with numerous unfunded semi-bandit groups in 1996, the first Taliban government announced the establishment of the Islamic Emirate of Afghanistan and even granted its leader Mullah Omar the title of “Ruler of the faithful”. In general, this title denotes a caliph, the ruler of all Muslims, but today this movement declares that the title Amir al-Mu’minin is only used locally, for Afghans.

Then, on September 11, 2001, al-Qaeda** led by the already mentioned Osama bin Laden committed a series of terrorist attacks against the World Trade Center and the Pentagon. The war in Palestine (Al-Aqsa Intifada) was the announced reason. It was the biggest terrorist attack in American history. Unfortunately for the Afghan people, Osama decided to hide in the Islamic Emirate. As a result, this led to a 20-year civil war that began with Operation Infinite Justice.

After the death of Osama bin Laden during an anti-terrorist operation, the location of the foreign contingent was seen as a means of supporting the people’s government against terrorists and protecting the Afghan people. Over the past decade, Alliance forces have reportedly been gradually withdrawing troops from Afghanistan relying on the local government. But the meaning of Ashraf Ghani’s government in Afghanistan was preceded by the harsh reality: after the final withdrawal of troops, he did not even resist 10 days under the Taliban. And here the real faith in people’s democracy played a role: even opponents of the Taliban were ready to accept any power for peaceful heaven.

Despite various waivers from the new Islamic emirate, Western accusations that the Taliban were plunging the country into chaos and humanitarian crisis seem strange.

Thus, David Beasley of the World Food Program said Thursday that “the worst humanitarian crisis in the world” was unfolding in Afghanistan, where more than 22 million people could be threatened with starvation.

But how will the Taliban solve this with two big “buts”:

First, the complete international blockade of Afghanistan. The new government has not been recognized by any country in the world. At the same time, he cannot exchange or borrow money.

Second, the US has frozen all Afghan state reserves in US banks since the pro-US government of Ashraf Ghani. Legally, it is clear: since the United States does not recognize the new government of Afghanistan, the money does not belong to them. But how to solve a humanitarian crisis in Afghanistan without public reservations? Unemployment and the almost total collapse of the Afghan banking system are flourishing precisely because of the banal lack of liquidity.

In response, the US Department of Finance emphasizes the political nature of this decision: “I do not see any situation where the Taliban would be allowed to access the reserves of the Afghan central bank. We believe it is essential that we maintain our sanctions against the Taliban while finding ways to ensure that legitimate humanitarian aid reaches the Afghan people. In other words, if it has not been possible to control the Taliban by force, it can be done through loans and fund-raising humanitarian aid.

At the same time, the position of the Russian Foreign Ministry remains unchanged, which is to release the accounts: “We support the World Bank‘s decision to allocate 280 million dollars from the UN World Food Program and UNICEF from the frozen money of Afghanistan. Reconstruction Fund. However, we consider the measure not enough and we urge them to release the rest of the money from the fund as soon as possible, which is over $1 billion,” Maria Zakharova said in December.

Russia’s deputy permanent envoy to the UN, Dmitry Polyansky, also said: “We urge the United States and other Western donors to return the money to the country,” he said, “This money belongs to the Afghan people and cannot be used as a bargaining chip and punishment of Afghans for the new reality of the country.

*The Taliban are an organization prohibited in Russia and recognized as terrorist by the decision of the Russian Supreme Court since 14.02.2003.

** Al-Qaeda is a banned terrorist organization in Russia.

The author’s opinion does not necessarily coincide with the position of the editorial board of Realnoe Vremya.