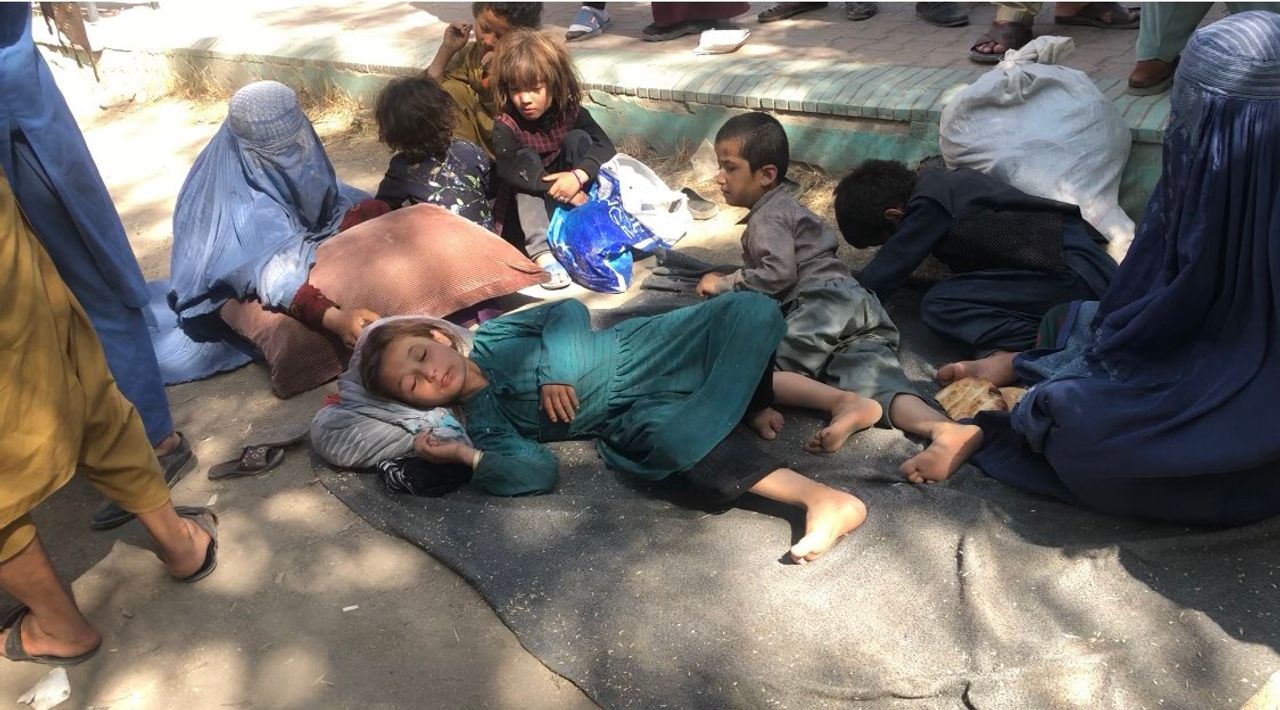 Protesters have marched through the streets of Kabul in recent weeks demanding that the United States lift its financial blockade and end its illegal seizure of financial assets from Afghanistan, which together are causing an economic collapse in the poorest country in Asia.

Women marched on December 29 carrying banners that read “Don’t Kill Us With Hunger”, “Let Us Live” and “Joe Biden!” It is very cold and my children have nothing to eat at home. A similar protest took place on January 2 and more are planned in Kabul and other Afghan cities.

With its policies of vindictive sanctions, Washington is threatening to kill more Afghans with starvation over the next few months than it slaughtered in the 20 years of US war and occupation that ended in August.

With a cold winter setting in, the entire country is on the brink of famine. “A million children [under the age of five] are so malnourished that they risk dying in the next few months, ”warned the International Committee of the Red Cross (ICRC) last month.

The United Nations reports that only 2 percent of the Afghan population has enough to eat. Twenty-three million people face extreme hunger, while official statistics place 90 percent of the population below the extremely low poverty line.

Mary-Ellen McGroarty, head of the World Food Program in Afghanistan, describes the country as “on the brink” of famine. “There is no province in Afghanistan today with less than 30 percent of its population in crisis or emergency food insecurity,” she said recently.

Hospitals and feeding centers are seeing the number of severely malnourished children brought in by desperate parents doubling and even tripling.

The country’s healthcare system is also on the brink of collapse, as the spread of the Omicron variant makes a new outbreak of the COVID-19 pandemic inevitable. Almost half of the country’s hospitals equipped to treat COVID patients have closed in recent months, while the only one left for Kabul’s 4 million residents cannot pay staff, lacking drugs and supplies base and is not even able to buy diesel fuel to run the generators used to produce the oxygen needed to save lives.

The ominous threat of the onset of winter to the starving masses of Afghanistan is a source of growing concern. Winter presents the added danger that the mountainous regions of Afghanistan will be cut off by heavy snowfall, leaving entire populations without food or access to assistance. Eloi Fillion, head of an ICRC delegation who was in Kabul on Tuesday, tweeted: “Heavy snow in Kabul today. The temperature could drop to -9 this week. Fillion said he was told people “burn furniture, shoes or tires for warmth,” adding: “Due to the economic collapse, thousands of Afghans have nothing left to do. in the face of growing challenges “.

The head of the Red Cross did not specify the source of this “economic collapse”. The Afghan people have long faced poverty and hunger, which have been exacerbated by severe drought. The abrupt withdrawal of American troops and the resulting collapse of the corrupt puppet regime established by the American occupation deprived the country of its main sources of income. Foreign aid accounted for 50 percent of Afghanistan’s gross domestic product and 75 percent of the government budget, while massive sums spent on the American war itself, much of which passed through the hands of entrepreneurs and government officials, were at the root of the corrupt and unstable economic configuration. It all ended.

But there is no doubt that the root cause of the collapse of the Afghan economy is the US sanctions regime. Washington transparently transferred to the Afghan government itself the sanctions imposed on the Taliban as a “terrorist” organization during the period of organizing an insurgency against the American occupation, after the fall of Kabul at the hands of the Islamist movement. August 15th.

Treating the government of a country of 39 million people and all of its agencies as a “foreign terrorist organization,” Washington froze nearly $ 10 billion of Afghanistan’s foreign exchange reserves held in the United States, the in fact stealing from the country in violation of international rules. law. The action has stifled the flow of money, which means the minority of the population with jobs are unpaid and those with savings in the bank cannot access their money. Businesses are unable to purchase supplies or pay salaries and are shutting down.

“Terrorist” sanctions have also crippled relations between the Afghan central bank and local banks and businesses on the one hand, and international banks and legal entities on the other. The end result is the scuttling of agreements to import food, medicine and other essential supplies. Remittances sent by Afghan emigrants to their families have also been cut, as well as funds to pay the workers of these relief agencies still on the ground.

The United States has used its overwhelming influence in the World Bank, International Monetary Fund, and Asian Development Bank to ensure that it abides by the US financial blockade.

Washington has casually asserted that it has granted exemptions from its sanctions regime for humanitarian aid, but, as in the case of Iran and other countries targeted by such punitive measures, the sanctions are so drastic. and threatening that few financial or business entities have an interest in tempting fate by concluding negotiations with the Afghan government.

The Biden administration’s hard line on sanctions against Afghanistan and its refusal to provide assurances that it will not penalize banks or companies that make deals with the country’s government has been largely attributed to political concerns regarding showing any weakness in the wake of the chaotic US withdrawal. end of August.

While such fundamental political motivations undoubtedly play a role, as well as the imperialist retribution against a population that forced an ignominious end to the United States’ longest war, Washington’s homicidal policy towards Afghanistan is motivated by specific objectives and strategic designs.

More than four decades ago, Washington launched Operation Cyclone, the largest in CIA history, arming and funding Islamist Mujahedin guerrillas in Afghanistan. The goal, shrouded in rhetoric about “freedom” and “democracy,” was to lure the Soviet Union into “its own Vietnam”, as former national security adviser Zbigniew Brzezinski put it. The decades of war that followed claimed the lives of millions of people.

In October 2001, the United States invaded Afghanistan under the pretext of a “war on terror” against Al Qaeda and the Taliban. Washington’s goal was to consolidate a client regime in a strategic Central Asian country – home to the second largest proven reserves of oil and natural gas in the world – and on the borders of China, Iran and China. the former Soviet Union.

The same essential motivations can be detected in current US policy, articulated by the Biden administration and its Secretary of State Antony Blinken in hypocritical “human rights” rhetoric. Washington does not intend to let China, Russia and Iran fill the void left by the military withdrawal of the United States and NATO from Afghanistan.

According to Financial Time , China has “expanded its presence” in Afghanistan since the fall of the US puppet regime, “with business groups exploring the country’s vast reserves of minerals like lithium and making deals to buy agricultural products.”

US imperialism’s scorched earth sanctions policies serve to disrupt these economic ties and create a crisis on the Chinese border, including the potential threat of further terrorist operations from Uyghur Islamist separatists.

At the same time, Pentagon officials have revealed plans to resume drone missile strikes in Afghanistan, ostensibly directed against the Islamic State of Khorasan (ISIS-K), a group which the former Afghan puppet leader said Hamid Karzai, was introduced into Afghanistan by the CIA. . He carried out a series of terrorist attacks against the Taliban regime. Further US bombing will further destabilize the country.

Washington’s policy in Afghanistan is tied to its broader war preparations with its main strategic rival, China. If a million more Afghan children die, they will be considered, along with the tens of thousands of children killed in US bombings and drone attacks, as collateral damage.

While ignoring demands by protesters in Kabul to release assets that could stem mass starvation, the US State Department last week announced the appointment of a “special envoy for women, girls and human rights. Afghans ”. Appointed Rina Amiri was assistant to former US special envoy to Afghanistan Richard Holbrooke, providing a ‘human rights’ facade to the administration’s military ‘surge’. Obama.

Amiri will beat the women’s rights drum to justify Washington’s murderous policies. A key point of the propaganda will be on the right of girls to go to school. This as Washington’s financial stranglehold prevents teachers from being paid and forces schools across the country to close, even as children who have attended them starve.

What the WSWS wrote about the 2001 invasion of Afghanistan

From the outset, the WSWS denounced Washington’s lies that its illegal invasion of Afghanistan was an act of self-defense in response to the September 11 terrorist attacks.

How the right-wing media celebrate the January 6 anniversary