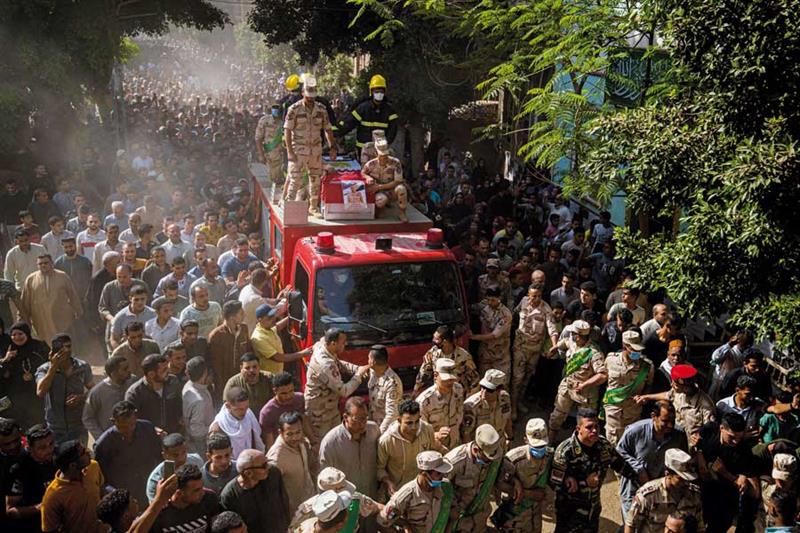 On May 7, a terrorist attack hit a military checkpoint near a water pumping station in the eastern Suez Canal zone, killing an officer and 10 soldiers, according to a statement issued by the military spokesman. armed forces. The following day, the Supreme Council of the Armed Forces (SCAF), led by President Abdel-Fattah Al-Sisi, met to discuss the incident and review the steps taken to prosecute and apprehend the perpetrators. Al-Sisi asked law enforcement to continue the work of clearing North Sinai of terrorist and jihadist elements and to take all necessary security measures to eliminate terrorism.

According to a statement issued by the presidency after the meeting, the president praised the efforts of the armed forces to eradicate terrorism in the Sinai “in cooperation with the honorable people of the region”, and praised the progress of the army in the realization of national mega-projects. in collaboration with government institutions.

The Egyptian people fully appreciate the sacrifices made by members of the armed forces and police to safeguard the nation’s security, Al-Sisi said.

A North Sinai security source believes the attack was carried out by a handful of operatives determined to attract media attention. According to the source, the state’s recent call for dialogue with the opposition and the release of a number of opposition figures may also have been a motive, with the attack aiming to refocus the attention of the State on military/security issues rather than on a political track from which the Muslim Brotherhood will be excluded.

Some observers also believe recent Ramadan soap operas targeting extremism and Islamist groups may have influenced the timing of the attack, while others suggest its aim is to create the image of a caving in government. under multiple pressures during a particularly difficult economic period.

The Islamic State (IS), through affiliate websites such as Naba Sinai, claimed responsibility for the attack. This was expected, given that the terrorist organization is trying to reassert its presence after the United States eliminated ISIS leader Abdallah Qaradesh (Abu Ibrahim Al-Hashemi) in Syria in January.

The successor to Qaradesh Zeid Al-Iraqi (Abul-Hassan Al-Hashemi) who was eager to prove himself in various theaters. IS attacks are increasing in Iraq, Afghanistan, Pakistan and the African Sahel. Nigeria has recently seen a number of attacks and IS is reportedly repositioning itself in southern Libya. Al-Qaeda in Yemen has also resurfaced and staged a number of attacks, suggesting that while IS is most capable of doing so, terrorist organizations in general are determined to reassert themselves.

In his speech at an official Iftar banquet on April 26, President Al-Sisi said he did not want to officially declare that the armed forces had totally eliminated terrorism. There were still tasks to be done, including clearing the Sinai of explosive devices that continue to pose a danger to military personnel and civilians.

Government statements and actions reflect an understanding that the success of counterterrorism efforts can never be absolute but must be measured in terms of the elimination of terrorist commanders, networks, cells, infrastructure and logistics. . This was implied in the SCAF statement regarding the prosecution of terrorists who remain at large, an implicit acknowledgment of the possibility that sleeper cells may exist.

It should be borne in mind that the terrorists chose an isolated area and an essential civilian installation – a water pumping station: the operation could have aimed to deliver a double message, targeting not only the military but an essential installation to the development of Sinai which has made immense progress in recent years.

Last week’s attack is unlikely to mark a significant resurgence of terrorism in the Sinai as, in addition to the ongoing hunt for perpetrators and search operations, the armed forces continue to implement other counter-terrorism measures. .

And just as importantly, the development plan for Sinai, a major element in the fight against terrorism, is moving forward. Sinai’s development process has succeeded not only in eliminating the conditions that facilitated the recruitment of terrorists, but it is fully supported by the Bedouin tribes who have become a major asset in the drive to eradicate terrorism in the peninsula.

A source from one of the tribes in the Beir Al-Abd region of Sinai confirmed that the elements carrying out terrorist attacks are individuals on the run from security agencies who are hiding in remote mountainous areas and have no no known tribal ties. The tribes, he added, fully support the government and the armed forces in the fight against terrorism, not only because of the threat they pose to national security, but also because of the threat that the Islamist radicals represent for Sinai society and the role of the Sinai tribes. Indeed, terrorists have increasingly targeted tribal leaders in recent years but, as the Federation of Sinai Tribes announced immediately after the terrorist attack, this will not deter them from continuing to cooperate with the armed forces. .

*A version of this article appeared in the May 12, 2022 edition of Al-Ahram Weekly.