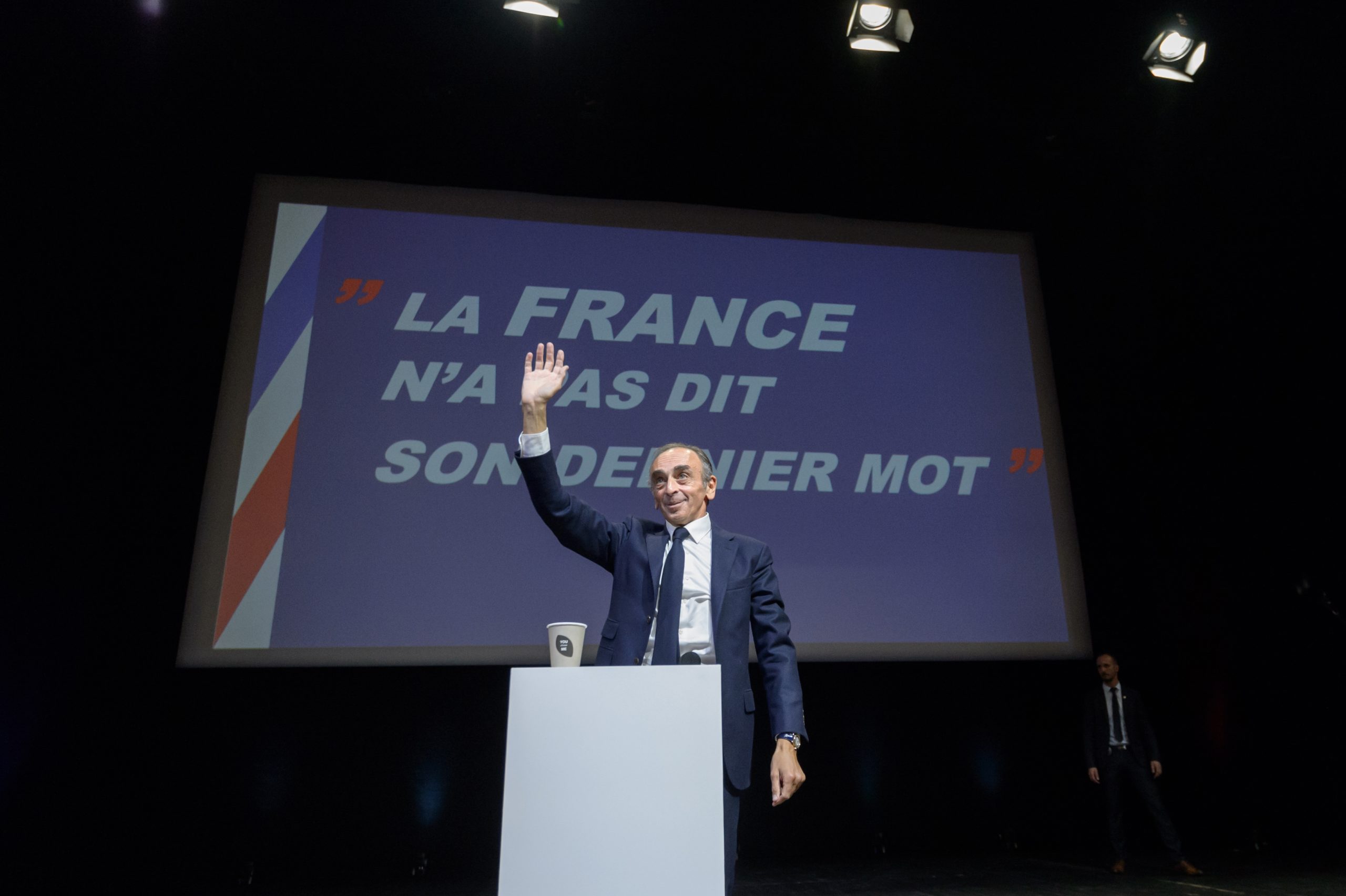 To understand Éric Zemmour’s meteoric rise in the French presidential race, we have to start from the 1980s, when the political spectrum began to shift towards the right, even the far right. Invoking “realism,” the left began chasing the right, while the right chased the far right. This is why xenophobia and racism are no longer a dividing line, they have become the common denominator of government policy. However, something else happened in the 2010s. The National Rally is changing course under its new leader: Marine Le Pen is developing a strategy of “de-demonization”. It draws its inspiration from the Dutch extreme right which has taken hold over the previous decade: xenophobia and Islamophobia must no longer only be framed in nationalist terms, they are now justified in the name of the Republic, of the principle of secularism, and women’s rights. We are thus witnessing a double movement: the government parties have moved closer to far-right racism, which in turn has taken steps in their direction – Le Pen has ostensibly repudiated the blatant anti-Semitism of his father. This conjunction has opened political space for “re-demonization,” with the return of old-fashioned fascist themes in neofascist garb, including explicit anti-Semitism, but with a twist: Zemmour himself happens to be Jewish.

This perverse situation offers at least one advantage. We cannot be told that we must choose our battles either against anti-Semitism or against racism: it is clear that there is no choice, we must fight both. We can go even further: since Zemmour embodies bigotry for equal opportunities (against Muslims and Jews, refugees and racial minorities, but also women and sexual minorities), we must fight each of these fights at a time. This does not mean that there is no difference between racism and anti-Semitism: if the two overlap, they have different histories. But it is useless to pit one against the other. This is not just an academic point. In the early 2000s, Pierre-André Taguieff began to denounce a “new judeophobia”. According to this historian of racism, under the guise of their support for the Palestinian cause, segments of the left and supporters of Islamic fundamentalism have forged an unholy alliance based on anti-Semitism, therefore assimilated to anti-Zionism. It has become a culturalist argument incriminating French Arabs, and more generally racial minorities. While they are undoubtedly victims of daily racism, as a group they are also suspected – even accused – of being guilty of anti-Semitism.

But this ideological argument has recently found an echo in the French government’s attacks on so-called academic “Islamo-leftism” – with the help of Taguieff himself. Of course, there is great confusion in the polemic launched against gender studies and inclusive language; word race and the concept of intersectionality; postcolonial studies and decoloniality; “awakened culture” and “cancel culture”. However, the common denominator of this hodgepodge is critical thinking, at a time when contemporary social movements are drawing inspiration from new academic fields. The virulent denunciation of minority studies thus undermines minority mobilizations: President Macron denounced for the first time “the racialization of the social question” in June 2020, precisely when the Adama Traoré committee, echoing Black Lives Matter, organized the first major demonstration in Paris at the end of the confinement linked to COVID-19. In October, after the beheading of French high school teacher Samuel Paty, National Education Minister Jean-Michel Blanquer went so far as to accuse “Islamo-leftists” of “intellectual complicity with terrorism”, thus inciting academics to threaten.

Such an accusation carries even more weight in the context of terrorist attacks against Jews on French soil – from Mohamed Merah murdering three children at the Ozar Hatorah Jewish school in Toulouse in 2012, to Amedy Coulibaly’s killing of four patrons. of the Hyper Cacher store in Paris in 2015. While these terrorist acts were perpetrated in the name of Islam, they were repeatedly denounced by Muslim religious authorities, who insisted that these acts of violence were incompatible with their faith. Moreover, no link to terrorist attacks has ever been established, in France or elsewhere, with left-wing ideologies, or with academics of any kind. A terrorist’s most specific intellectual claim was in Christchurch, New Zealand, where Brenton Tarrant killed 51 people in a mosque: the white supremacist borrowed the title from his manifesto, “The great replacementby an openly racist French writer, Renaud Camus. The campaign against “Islamo-leftism” in academia must therefore be put into perspective.

Has anti-Semitism moved from the extreme right to the extreme left? At the heart of the thesis called “new anti-Semitism” is the idea that prejudice against Jews is of a different nature than racist prejudice against migrants, Arabs or Muslims, for example. But the annual Racism, Anti-Semitism and Xenophobia Survey conducted by the official Human Rights Commission contradicts this assumption, finding that “there is a statistical correlation between anti-Semitic and xenophobic attitudes” – and in fact , “this correlation is stronger than that with the image of Israel or the Palestinian conflict. In a word: “Those who reject the Jews also reject the Muslims, foreigners and migrants.” This is confirmed by the French political scientist Nonna Mayer, who argues that far from replacing the old version, “the new anti-Semitism remains marginal; anti-Jewish fantasies are still structured by old stereotypes that associate Jews with money and power. put on this “new” anti-Semitism serves to obliterate the return of the “old” in the neo-fascist context of today.

Zemmour is not only xenophobic and Islamophobic (in January 2022, he was convicted for the third time for “inciting racist hatred”) and explicitly homophobic and sexist (multiple accusations of sexual assault came to light in 2021); he goes so far as to play with anti-Semitic rhetoric. by historian Robert Paxton VichyFrance Nevertheless, Zemmour maintains that Marshal Pétain “sacrificed foreign Jews to save French Jews”. This “revisionism” (the French term has only negative connotations) serves to justify its efforts to contest the “ideological trial” of war criminal Maurice Papon and to protest against the speech of President Jacques Chirac in 1995, which ultimately recognized the responsibility of the French State in the events of 1942. Rassemblement du Vel d’Hiv, affirming: “Such penance has been very detrimental to us. Unsurprisingly, this presidential candidate wants to abolish the 1972 law against racism and the 1990 law against Holocaust denial which expose him to prosecution.

In 2014, Zemmour went so far as to invoke a racial argument to predict the defeat of the German soccer team in the final rounds of the World Cup after the team began to include citizens of Turkish descent: ” Germany won despite having only dolichocephalic blond players.” It is not so much that, once again, the Germans have won the World Cup, but that Zemmour, a journalist, can revive a vocabulary forged by Georges Vacher de Lapouge in his 1899 book The Aryan, whose scientific racism was to inspire Nazi ideology. What’s even more remarkable is that no one seemed to notice or care. Similarly, when Zemmour compared the Minister of Education to “Doctor Mengele” because of his recommendation to facilitate the inclusion of transgender students in public schools, Blanquer was surprisingly merciful, refusing to take seriously a such “exaggeration”. Public leniency encouraged Zemmour to criticize the families of Merah victims for choosing to bury their children in Israel: “I don’t know if these people are French,” he remarked. “They are foreigners first.”

Can Zemmour hope to escape accusations of anti-Semitism simply because he is Jewish? This is the provocative declaration of Jean-Marie Le Pen: “The only difference between Éric and me is that he is Jewish. It is therefore difficult to call him a fascist or a Nazi. This gives him more freedom. The former chief visibly savors this “re-demonization” which rehabilitates his old strategy abandoned by his daughter: Zemmour “will soon have Lucifer’s tail and cloven hooves too!” Indeed, Jean-Luc Mélenchon, the left-wing leader of La France Insoumise, initially refused to recognize Zemmour’s anti-Semitism: “An anti-Semitic Jew? It’s new for me! (Under the pressure, he eventually had to publicly change his mind.) But Jewish figures aren’t so blind. Zemmour is sued by an association of Jewish students. The chief rabbi, Haïm Korsia, made this clear: “Anti-Semite? Certainly. Racist? Obviously.” (He even pretended to ask himself: “Is he a Jew?”) In response, Zemmour called him a “court Jew”. The former “new” philosopher Bernard-Henri Lévy l’ accused of having committed “an offense to the Jewish name”, even “a profanation of his name”. Zemmour responded by calling him a “traitor” and using an explicitly anti-Semitic vocabulary: “cosmopolitan” and “anti-French”. François Kalifat, the president of CRIF (body supposed to represent the Jewish community), can thus draw the political conclusion “Not a single Jewish vote!

Of course, there are exceptions. Another media philosopher, Alain Finkielkraut, is remarkably lenient, writing that “to his credit, Zemmour puts words” on the “existential angst” of French people who fear the threat of these “lost territories of the Republic – the working class, largely non-white suburbs who are the constant target of the reactionary rhetoric of this sentence. This Jewish philosopher thus feels close to the anti-Semitic presidential candidate: “The newspapers that stigmatize him, and us, are the same ones that ignore the daily attacks against the police, the violence that never ceases to erupt in the projects.The definition of this common enemy (the new racialized “dangerous classes”) thus explains this paradoxical tolerance for anti-Semitism – provided that it is directed primarily against migrants, Muslims and minorities. This is what I have (ironically) called “anti-Semitism for a good cause”.

In his essay “Black Skin, White Masks,” Frantz Fanon quotes his philosophy teacher in Martinique: “Whenever you hear someone insulting Jews, be careful, he’s talking about you. In other words, “an anti-Semite is inevitably anti-Negro”. This argument is “reversible,” as writer Cloé Korman puts it in an essay: “Any racist enterprise is a threat to Jews.” This is the lesson that must be drawn urgently from the resistible ascent of Zemmour. People are getting used to the xenophobic and racist discourse distilled into the public sphere every day. Provocation now requires a poison that feels stronger for having long been banished from legitimate political discourse. Today, the return of open anti-Semitism in French politics is the ultimate stage of racism. Playing against each other makes no sense. We have to fight both.

This text was first published in French on November 21, 2021 on the L’Obs website.

Éric Fassin is a professor of sociology at the University of Paris 8 and a senior member of the Institut Universitaire de France.