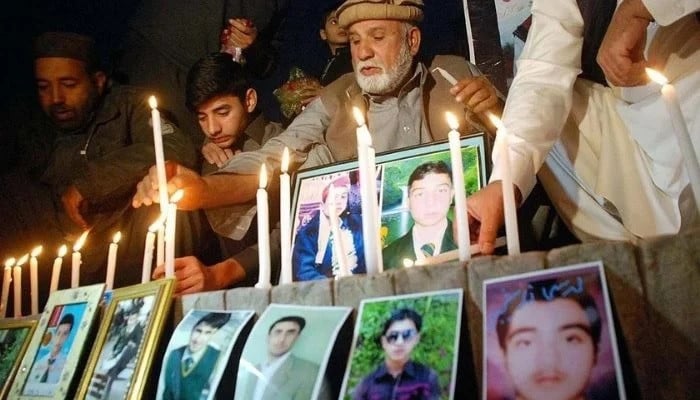 Are individuals more powerful than the state?

Today marks seven years since the deadliest attack on young students in the country by Tehreek-e-Taliban Pakistan ever. On a beautiful sunny winter morning, 147 children were brutally massacred in the army’s public school in Peshawar.

At that time, hardly anyone would have imagined that in a few years, Osama bin Laden – the founder of Al Qaeda – would be labeled a martyr by the Prime Minister on home soil; Ehsanullah Ehsan – the mastermind of the APS attack – would mysteriously escape invincible security; and the TTP would be seen as a candidate for amnesty while the guardians of APS victims would still await justice.

The APS attack of December 16, 2014, was an attack on civilians, penetrating the security of a state institution, with the intention of killing as many children as possible. The TTP claimed responsibility for the attack and called it revenge against Operation Zarb-e-Azb launched by the military in North Waziristan the same year. Some in Pakistan later called it collateral damage.

The entire nation mourned the insurmountable loss, emotionally united against the terrorists and even pledged to educate the children of our enemies. However, everything ended in nothing. Pakistan could certainly do better, provided that a fairly comprehensive national action plan is implemented in both letter and spirit.

Since the creation of the TTP in 2007 after the miscalculation of Lal Masjid by dictator Pervez Musharraf, the militant organization has launched numerous attacks threatening Pakistan’s national security. They attacked civilians, politicians, military, police and even polio officers. For them, the idea of â€‹â€‹the state of Pakistan is contrary to Islam and that is why they are waging a terrorist campaign against the state to uproot government structures.

The TTP ideology fortunately failed to win the support of the masses, but Musharraf’s offensive against Lal Masjid provided various extremist sections with a glue to unite in the form of Tehreek-e-Taliban Pakistan. Most recently, we saw the cleric Lal Masjid celebrating the conquest of Kabul by the Afghan Taliban. Waving Afghan Taliban flags at the seminar, he defied the Pakistani state and dared the police to wait and see what the Pakistani Taliban would do to the state.

The question is: are individuals more powerful than the state? If the state gives space to extremists and lets them grow stronger and garner support until they become a potential security threat, only to be crushed by brute force, then the chances of success of approach are minimal. Frankenstein’s monsters are difficult to chain. Creating them for political purposes is easy, but getting rid of them is a complicated task. In fact, it is catastrophic. Mistakes should not be repeated.

Unlike the TTP, the ideology of Tehreek-e-Labbaik Pakistan enjoys massive popular support. The party sees itself as the kingmaker in the next election. As they gather in large numbers from time to time, disrupting the peace in the public sphere, some voices begin to plead for the use of force against them – as if repressive measures could stifle popular ideas, no matter what. the question of their legitimacy.

Succumb to the demands of the TLP over and over again, call it a prohibited organization one day and then embrace it the other day, send its leader to jail and then greet him on his release, and feign shock and sympathy for the damage done by the TLP only confuse citizens and undermine public confidence in governance structures.

The wave of radicalization that came with the TLP was arguably previously unknown to the country. Incidents like the Sri Lankan citizen being lynched and burnt by a mob in Sialkot are an unfortunate expected result of such ideologies integrated for political ends.

During the Cold War era, Pakistan was complicit with the United States and the Saudi kingdom in the production of jihadist ideology. This ideology backfired and Pakistan became a living hell suffering from religious extremism. It took years and immense efforts to bring this crisis under control. Although Pakistan has enjoyed relative peace in recent years, terrorist organizations still operate here. But the threat has not entirely disappeared. When the Taliban conquered Afghanistan, other faith groups in the region also gained confidence. There is speculation that Pakistan was hoping the Taliban in Afghanistan would use their influence to negotiate deals between the Pakistani state and the TTP, but lately it seems that hopes were pure delusions. The TTP ended the ceasefire and any future for the talk is uncertain.

Grant amnesty to an organized terrorist network, which has the blood of tens of thousands of Pakistanis on its hands and which does not believe in the constitution at all, simply in the idealism that they will become inclusive citizens at the same time, will not be of any use. The country needs a serious review of its policies on how to deal with radicalization. The least he can do is refrain from creating monsters like the Mujahedin, as they cannot be taken down when the urge strikes. They are expensive liabilities, not assets. Also, make sure the audience isn’t radicalizing. Radicalization happens quickly while de-radicalization takes considerable time and effort.

The joint risk of a radicalized population in the form of the TLP exercising its muscular barelvism and a militant TTP will be a great challenge for the state. For the most part, the state itself is allegedly responsible. Will she handle the coming crisis responsibly to avoid blame? We can only hope so.

Originally posted in The News

A Case Against Smith, Bryant and Kennedy: Rwandexit on Foreign Falsehood | New times