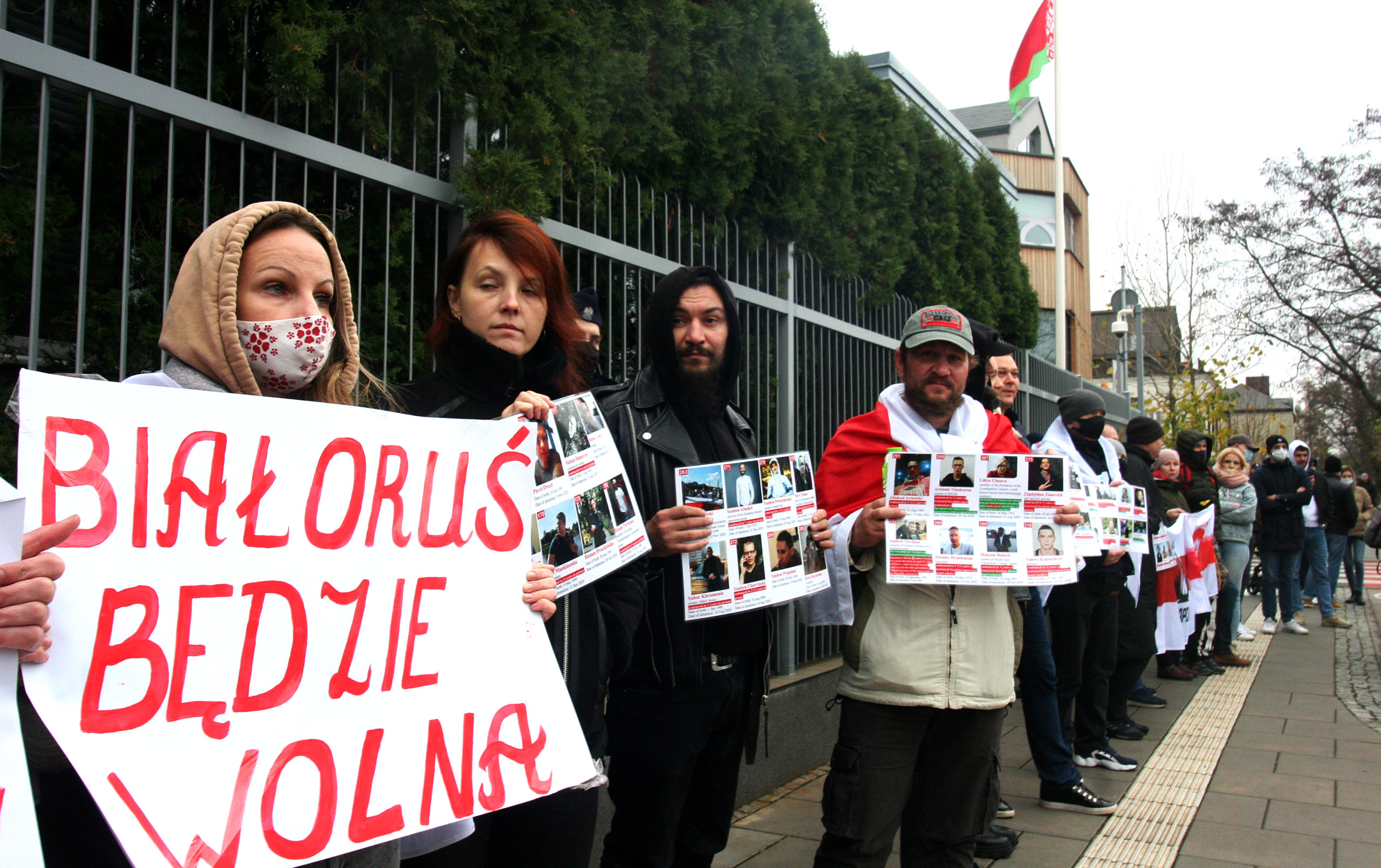 Belarusian opponents from neighboring Poland demonstrated this Sunday in front of their country’s embassy in Warsaw to ask the European Union to harden its position towards the regime of Alexander Lukashenko because of the migration crisis it has generated in the border. At a rally attended by around 100 people from different branches of the Belarusian opposition in Poland, participants stressed the importance for the EU of imposing more sanctions on Minsk and not legitimizing Lukashenko as an interlocutor .

The Union does not recognize Lukashenko as president of the country due to accusations of rigging in the August 2020 elections – in which the authoritarian leader was re-elected by an overwhelming majority after 26 years in power – and the subsequent crackdown on demonstrations against him. However, German Chancellor Angela Merkel has spoken twice by phone with Lukashenko this week in an attempt to resolve the situation of the thousands of migrants crowded at the border with Poland. It was the first time that a Western leader had engaged in dialogue with the Belarusian leader since the elections.

“Today we are trying to get the EU to focus on the fact that the main problem is Lukashenko,” one of the participants, Stasia Glinnik, told the newspaper. “We want the money returned to people at the border and new sanctions approved. Those that already exist affect more specific people and affect only 5% of the country’s economy, ”added Glinnik, granddaughter of Stanislav Shushkiévich, one of the three signatories in 1991 – with Russian Boris Yeltsin and the Ukrainian Leonid Kravchuk – from the famous Belavezha agreements (by which the USSR formally disappeared) and the first president of the new independent Belarus, until 1994.

Although the main target of criticism has been Lukashenko, depicted with a puppet with the word “terrorist” and a sign reading “Go away, rat”, Merkel and Russian President Vladimir Putin – Minsk’s support in this crisis – were the other two great pet peeves. One of the banners read “Merkel, which side are you on?” in another, the Belarusian leader was seen with the phrase “Sir Lukashenko ”(M. Lukashenko, in German) and two portraits of Merkel and Poutine. This is the phrase, instead of “President Lukashenko”, that the German Presidency has used to account for the telephone conversations between the two, which the demonstrators regard as legitimation. de facto of the Belarusian leader.

“We don’t like talking to terrorists,” says Glinnik. “He is not recognized as president. So why are you talking to him, if he is not the representative of Belarus? This is exactly what I wanted to achieve with this blackmail ”. Next Tuesday, they will demonstrate precisely at the German Embassy in Warsaw.

The Belarusian opposition in Poland regularly organizes demonstrations, but this Sunday was the first against the “hybrid war” launched by Lukashenko. Tens of thousands of Belarusians reside in Poland, with the largest community in the capital. The post-election crackdown has led to an increase in arrivals, which Warsaw is facilitating, although the main opposition leader, Svetlana Tijanóvskaya, fled to Lithuania immediately after the election.

Different branches of the opposition participated in the rally, such as the Christian Democrats or the Anarchists, a group persecuted by the authorities in Minsk who displayed a black banner with the slogan: “Politicians play, people die”.

The assistants chanted songs like “With will we will win”, “Long live Belarus” or “Minsk, Warsaw, the same goal”. Many of them had attached to their backs the white and red flag which was official in Belarus at various times in history and which is used today by the opposition. They also displayed posters in Belarusian, Polish and English with slogans such as “Freedom for political prisoners” or “While the EU is trading with Lukashenko, Lukashenko is trafficking in human beings”.

A group also collected signatures asking the Polish authorities to declare Lukashenko “terrorist”, as well as a poster with the photos and names of 27 Belarusians whose deaths are attributed by the opposition to the repression of the regime. Among them, the best-known case, that of the painter Roman Bondarenko, who died in hospital a year ago after receiving several blows to the head of plainclothes security agents.

Among the participants is Mariya, who has only been in Poland since April. She says she was an election observer and began “to collect all the evidence that the results had been falsified and to disseminate this information”. Then the authorities “attacked all the administrators of the group. [de la oposición] and telegram [un servicio de mensajería que suelen emplear] and one of them was imprisoned by the penal code. I was the administrator of another and began to understand that they would come after me and that I had to leave immediately. In fact, they came to get me when I was already there, ”he says.

Aksana (not her real name) collects signatures and calls for “a firm stand against a dictator”. In her country, she says, she was one of the organizers of the electoral fraud protests, but she ended up packing her bags a year later. “I left mainly because I didn’t want my taxes to finance Lukashenko. And because they were soon going to come and get me a second time, ”he says, referring to a first incarceration of one week.

“We are asking for more sanctions,” said Andrey, who arrived in Poland this summer, “but I also think the Belarusians themselves who are inside must do something, like a strike. After the elections, many ‘between us took to the streets, it was nice, but things got more and more ugly, ”he explains.

Disclaimer: This article is generated from the feed and not edited by our team.