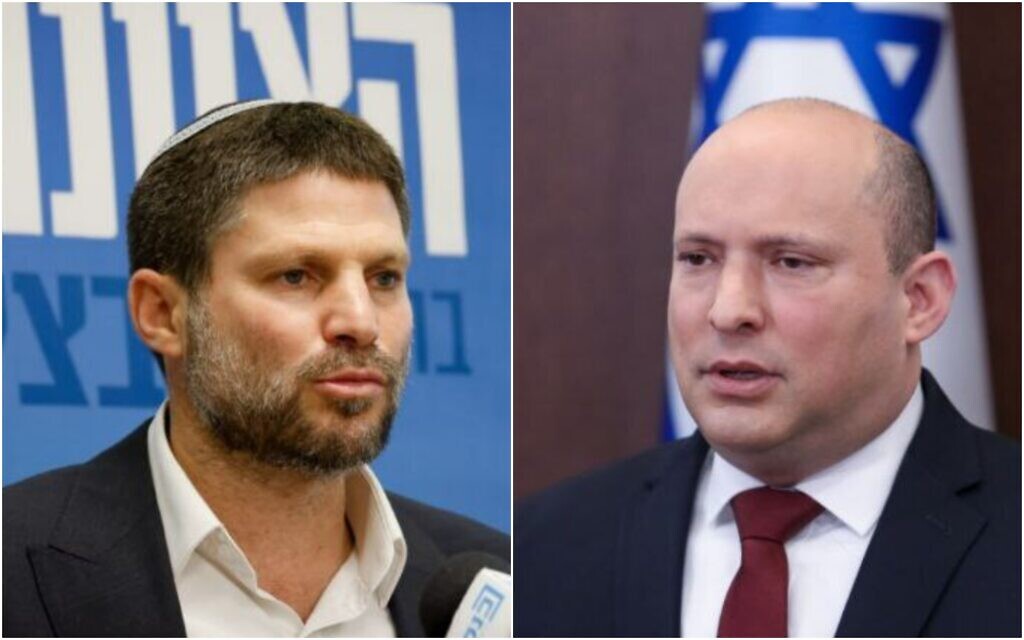 Prime Minister Naftali Bennett on Sunday censured far-right MK Bezalel Smotrich, leader of the Religious Zionism party, for tweets accusing the government of being responsible for the recent spate of terror attacks.

“Anyone who publishes such a thing, which dances on the blood of the dead, represents neither Zionism nor the religious,” Bennett said on Sunday.

In a first tweet on Friday, Smotrich sarcastically thanked “Interior Minister Ayelet Shaked and her friends from the Yamina party” for preventing a fifth election by “creating a coalition with supporters of leftist terrorism”.

The tweet included photos of the 11 people killed in recent terrorist attacks in Beersheba, Hadera and Bnei Brak, with the slogan “They won’t vote anymore”.

Smotrich was a member of Yamina, until he left to form his own party with Itamar Ben Gvir and several other far-right politicians ahead of the March 2021 elections.

Following criticism on the tweet, Smotrich doubled down, “Knowingly lying to voters is a moral nadir. Forming a government with the extreme left and the Islamic Movement, which you had warned a month before against joining, is a nadir of values. To see how, from the moment the government was formed, violence among Israeli Arabs increased, how we are faced with an unprecedented wave of terror from Israeli Arabs, and yet we hunker down in your offices luxurious and don’t even attend the funerals of the murdered – is moral degradation and an abomination,” he said.

In his Sunday response, Bennett said he “didn’t have time this weekend to comment on this horrible post. I’ve been involved in the security issues, in the dozens of actions we take to stop the wave of terrorism, thwart the terrorist attack in Jenin and other burning issues.

In response to Bennett’s comments, Smotrich said, “Anyone who has used bereaved families to round up voters and refuses even today to meet with them to please their partners who support terrorism better not talk about dancing on the blood.”

If so, we have a request.

Every day, our journalists aim to keep you up to date with the most important developments that deserve your attention. Millions of people rely on ToI for fast, fair and free coverage of Israel and the Jewish world.

We care about Israel – and we know you do too. So today we have a question: show your appreciation for our work by join the Times of Israel communityan exclusive group for readers like you who appreciate and financially support our work.


We’re really glad you read X Articles from The Times of Israel over the past month.

Thank you,
David Horovitz, founding editor of The Times of Israel