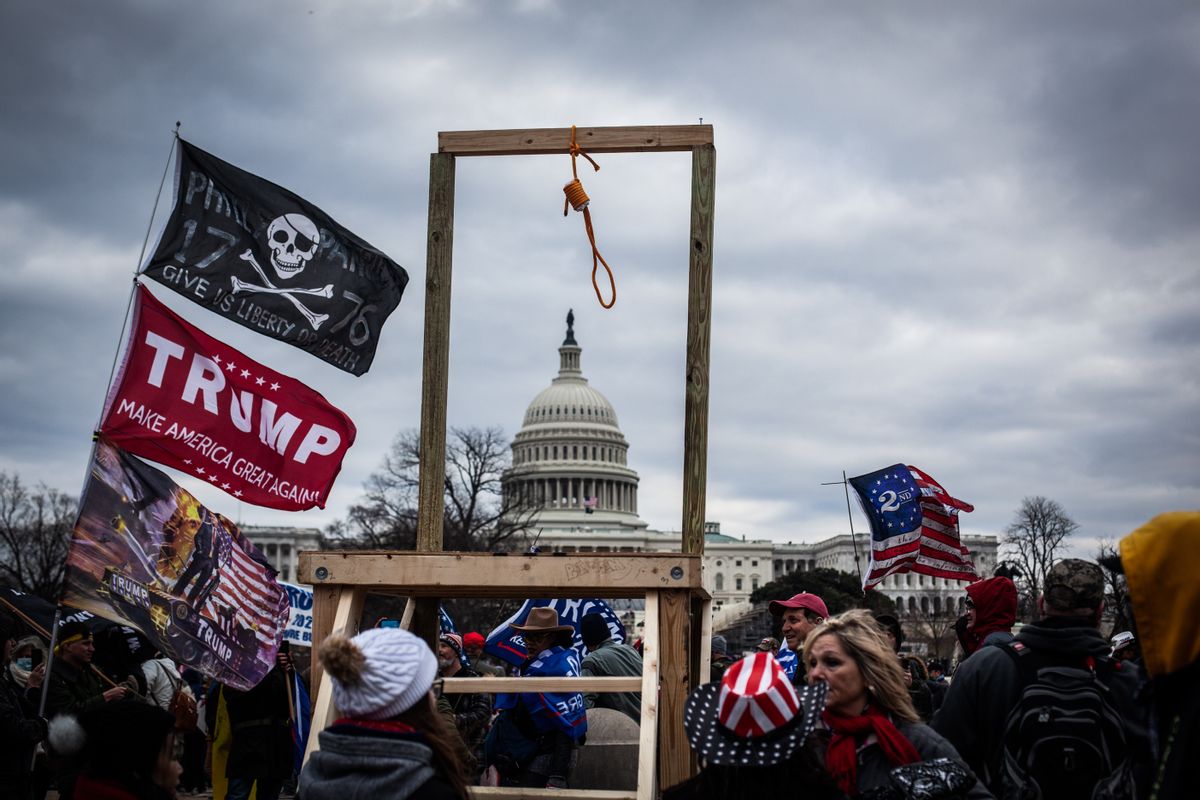 Black flag: understanding the latest threatening symbol of the Trumpists

It is an old truism that the “real bad guys” (and bad women) “move in silence and violence”. This is certainly true of the most dangerous and effective allies, henchmen, henchmen and other supporters of Donald Trump. But for Donald Trump himself, and most of his political sects, this rule does not apply.

Trump and his supporters were loud, exuberant and enthusiastic on January 6. The deadly attack on the Capitol had been announced publicly weeks in advance and should not have come as a surprise. Trump’s rallies and rallies continue to celebrate violence and the prospect of revenge – and in particular “revenge” on Trump’s “enemies”.

Steve Bannon, former Trump campaign chairman and White House strategist, has now threatened to recruit Republican-fascist “shock troops” with the apparent aim of undermining the US government, and by implication multiracial democracy, if and when Trump and the Republicans regain control of Congress and the White House.

On a daily basis, Fox News and other elements of the right-wing disinformation propaganda machine use stochastic terrorism and other techniques to radicalize their audiences and make them commit acts of political violence. That much, the Democratic Party and the political and media class in general have remained in denial and largely passive in response.

In a disturbing new development, Trump supporters have begun to fly all-black American flags, with an implicit threat to injure or kill their opponents – i.e. non-whites, “socialist liberals,” Muslims, vaccinated people and others considered “enemies” of “the real America”. As media critic Eric Boehlert recently noted, liberal opinion site Living Blue in Texas is sounding the alarm bells about the specific meaning of the black flag and Republican-fascist support for terrorism and other political violence. This post, “Are your Republican neighbors planning to kill you?” “, deserves a long quote:

It didn’t take long to find hundreds of videos where these Trumpers and so-called patriots were hanging black American flags. …

The American black flags are the flags which mean “no quarter will be done”. They are the opposite of the white flag of surrender.

According to the folks at TikTok and the Sun (British tabloid), the American black flag was born out of the Civil War and was flown by the Confederates.

Who are their enemies? Pretty much any non-conservative. You know, the Democrats, the Liberals, the LGBTQ, the BIPOC and the Vaccinated. …

So, we are the enemy, and they openly profess that they want to execute us. … So why are they doing this

Vaccinations against Covid, mainly. They believe Joe Biden declared civil war on them by demanding that employers with more than 100 employees and the military get vaccinated.

Yes, they say civil war, and they say it’s already started. But, sadly, many of them also live in states where masks and vaccines are required by state governments, healthcare, and law enforcement.

An alarming number of servicemen have made Tik Toks talk about how they are being fired for refusing the vaccine. This is alarming because there are probably an equal number of guys out there talking about the Civil War plans and actively using Tik Tok to recruit these military and ex-military.

The most important message they sent was â€œit’s timeâ€ or â€œthe time is rightâ€. …

While showing guns on Tik Tok is believed to be against community guidelines, they show many videos of their guns, shooting them, carrying them or sitting on their beds.

They mainly use Tik Tok as a recruiting tool and let others know their willingness to commit violence. Then they tell people to message them or find them on Telegram.

Regardless of how you interpret these videos posted by Trump supporters and other neofascists – which could be primarily performative – it is clearly true that the American right is increasingly willing to accept or tolerate violence as means to extend and protect its social and political power. (Salon could not find any licensed topical photographs of these flags and made the editorial decision not to reproduce the above-mentioned images, which are easy to find on social media.)

Opinion polls and other research have repeatedly shown that millions of Republican voters and Trump supporters would support the use of violence to remove Joe Biden from office because of the “Big Lie” and their belief that he is not a legitimate president. Likewise, a large part of Republicans believe that the rioters who stormed the Capitol on January 6 were “patriots” whose use of violence was justified.

And a new poll from the Center for Politics at the University of Virginia even suggests that over 50% of Trump supporters want ‘red states’ to separate from the Union. Republican elected officials and other right-wing opinion leaders continued to escalate threats of political violence against Democrats and other targeted groups.

In a recent speech at the North Carolina Faith and Freedom Coalition’s “Salt & Light” conference, Representative Madison Cawthorn, RN.C., published what sounded like a declaration of war:

It is time for the American Christian Church to come out of the shadows and say, “We are no longer going to allow our culture to be determined by people who hate the things we believe in … We are going to stand up for the cause of God valiantly.” . unbelievable inherent truths that precede any version of government. Because, my friends, if we lose this country today, if we bow our knee to Democrats today, our country will be lost forever, our children will never know what freedom is. It is our duty to stand up, Let us remain united as men and women of faith to fight for our country.

In an interview with MSNBC’s Joy Reid, terrorism and national security expert Malcolm Nance said that Cawthorn’s video “picks up on themes that don’t just come from the level of Steve Bannon and Donald Trump, they come from the Republican Street – and that the Republican Street is armed. They are angry. They were fed an entire line that made them believe that America is no longer America and that they no longer want the America that the rest of us, the 60 percent of the country, live in. And they are ready to take up arms for it.

Nance also noted that Cawthorn’s propaganda video is thematically similar to the type of propaganda used by Islamic terrorist groups such as ISIS and al-Qaida to radicalize and recruit members.

In an interview with Scientific American magazine, Dr. Bandy Lee, senior editor of the 2017 bestseller “The Dangerous Case of Donald Trump,” explained how a mentally pathological leader can ‘infect’ his followers and maybe even an entire nation:

I have described two major emotional drives: narcissistic symbiosis and shared psychosis. Narcissistic symbiosis refers to the developmental wounds that make the leader-follower relationship magnetically appealing. The leader, eager for adulation to compensate for an inner lack of self-esteem, projects awe-inspiring omnipotence – while the followers, made needy by social stress or developmental wounds, yearn for a parental figure. When such wounded individuals are entrusted with positions of power, they cause a similar pathology in the population which creates a relationship of â€œlock and keyâ€â€¦.

“Shared psychosis” – which is also called “million dollar madness” [“madness for millions”] when occurring nationally or “induced delusions” – refers to the contagiousness of severe symptoms that goes beyond ordinary group psychology. When a highly symptomatic individual is placed in a position of influence, the person’s symptoms can spread through the population through emotional ties, exacerbating existing pathologies and inducing delusions, paranoia, and a propensity for violence. even in previously healthy individuals. Treatment is removal of exposure.

Trump and his regime have authorized and encouraged his supporters and other supporters to engage in anti-social and anti-human behavior nationwide. Once such a process has started and these forces are unleashed, it is not easy to stop it. Fascism is not a simple machine with an on / off switch. In practice, fascism comes to life and takes on bodily form through its followers, each of whom is a potential carrier of the pathology.

As Hussein Ibish warned in a recent article in Atlantic, â€œCancer from political violence is not an endemic American disease. At the moment, it is a Republican disease. No one other than the Republicans themselves can cure her. will only continue to swell and collapse. From a Middle Eastern perspective, this is all terribly familiar. “

Fascism is a very virulent social disease which usually destroys the host body, but not before spreading the disease to many other people. In fact, if the original host dies, he or she can be elevated to martyrdom for “the cause,” serving to inspire existing followers and attract new ones.

Ultimately, Donald Trump, like other fascist and authoritarian leaders, is a symptom of a sick society. Trumpism is not really the main disease. For America to thwart the deep underlying disease that made Trumpism possible, it will take a long-term cultural and moral calculation. Anything less, and the disease of American fascism will only remain dormant until it resurrects again – perhaps in a more dangerous and virulent form.