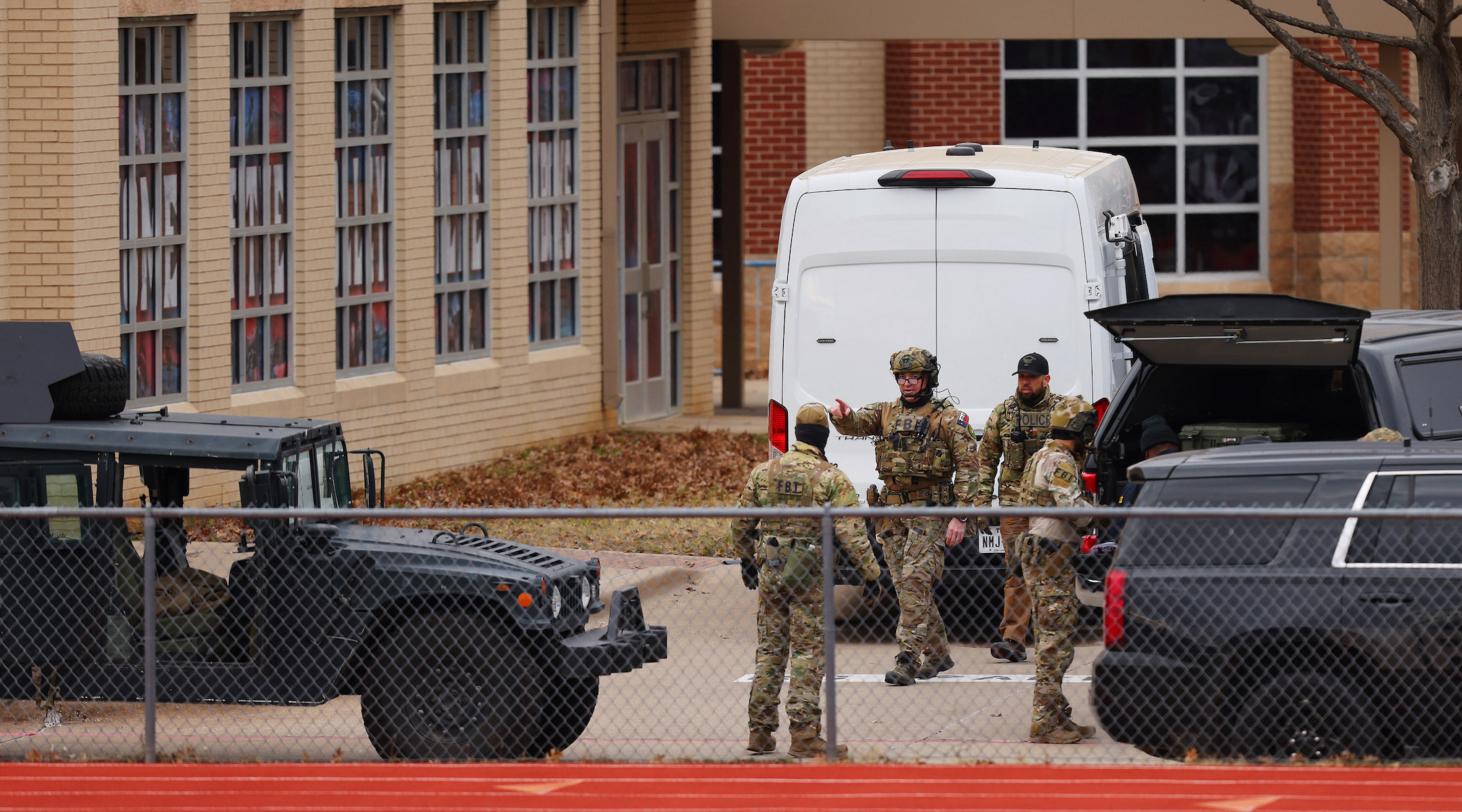 This is a developing story.

(JTA) – A man is holding a rabbi and several worshipers hostage at a synagogue in the Dallas-Fort Worth, Texas area. The hostage-taking took place during Shabbat services, which the synagogue was streaming live on Facebook.

The man is holding Rabbi Charlie Cytron-Walker and at least three worshipers hostage at Congregation Beth Israel, a Reform synagogue in Colleyville, a suburb north of Fort Worth, media reports.

The FBI is on the scene as well as the local police. The FBI conducts negotiations with the hostage taker. The White House is also “monitoring” the situation, according to reports. Israeli Prime Minister Naftali Bennett also said in a tweet that he was “closely monitoring” the situation. At 5:30 p.m., six hours after the hostage taking, Colleyville police said there were no injuries.

In an alert, Secure Community Network, which consults with state and local Jewish organizations, said the man was allegedly armed and made bomb threats.

“We are not aware of any direct credible threats against other synagogues,” Michael Masters, who heads the SCN, told the Jewish Telegraphic Agency.

Masters said the synagogue had undergone SCN training in August. “It was a complete training,” he said. “We worked through a number of different scenarios and issues and engaged with this congregation.” Masters said it was too early to tell if the protocols went into effect during the hostage taking.

According to the ABC, the man claims his sister is Aafia Siddiqui, a relative by marriage of Khalid Sheikh Muhammad, the chief architect of the September 11, 2001 terrorist attacks. Aafia Siddiqui is serving an 86-year sentence in the Fort Worth area for allegedly attempted to kill US servicemen after she was arrested in Afghanistan in 2008 on suspicion of plotting attacks in New York. She made of multiple antisemites explosions during and after his trial.

NBC reported that the man asked Cytron-Walker to call a rabbi in New York, demanding the release of Aafia Siddiqui.

A lawyer for a brother of Siddiqui, Muhammad Siddiqui, said Siddiqui was not the man inside the synagogue. The attorney, John Floyd, is the president of the Houston branch of CAIR, the Muslim legal advocacy group. CAIR and the Free Aafia movement, which claims the charges against her are false and that she was tortured, have condemned the hostage-taking.

As of 11:30 a.m. local time, police said they were conducting SWAT operations around the building. A man could be heard screaming on the live stream, talking about his children, his sister and Islam, and saying he believed he was going to die. The police established telephone contact with the man. At 2 p.m. local time, the live stream was discontinued.

The attack comes after two deadly attacks on American synagogues in recent years — in Pittsburgh in 2018 and in Poway, California in 2019 — that changed the way many Jewish communities thought about synagogue safety. Organizations like SCN have stepped up safety training in communities across the country.

“It highlights the need for all of us to be aware and vigilant and, above all, to keep the individuals of the synagogue in our thoughts and prayers and hope for a peaceful resolution,” Masters told JTA.

The Conference of Presidents of Major American Jewish Organizations, an umbrella group, said it was monitoring the situation. “Collectively, we must spare no effort to ensure the safety of American Jews in their places of worship and community centers,” he said in a statement.

Fort Worth Star-Telegram reporter Jessika Harkay shared a number of quotes from the livestream in a series of tweets.

“Don’t cry on the fucking phone with me,” one man says at one point. “Don’t cry over me. I have six beautiful children… There are hostages in the synagogue who are going to die. … Why are you crying?

The synagogue is in the process of recruiting a rabbi, according to its online calendar.

Cytron-Walker was Past President of the South West Association of Reform Rabbis and received an award from QESHET: A Network of LGBT Reform Rabbis. Before becoming a rabbi, he worked for a human rights organization in Detroit as well as a soup kitchen in Amherst, Massachusetts.