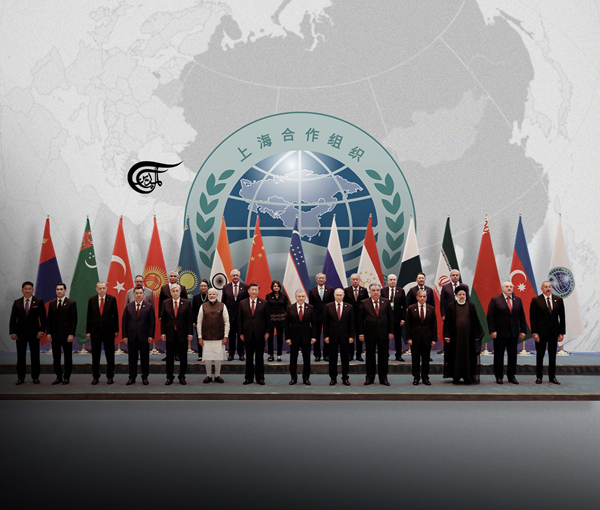 The spatial geography of the world has changed. His capital has moved from Washington, and the past week has seen him successfully relocate – albeit temporarily – to Samarkand. The shrinking Western ‘NATO sphere’ is turning inward, with an emphasis on ‘the enemy within’.

The West seeks both to bind its population to a tight message, respect for “war” with Russia and China, while blatantly using the enemy within as a “pretext” to “batten down the hatches”. ahead of a storm of internal concern caused by economic distress in Europe and the United States.

Von der Leyen in his State of the Union address to the European Parliament was explicit: “We will not allow any Trojan horse of autocracy [lies] to attack our democracies from within”. This echoes Biden’s own rhetoric about countering threats from within the United States.

For Europe, Ukraine has visibly gone from a supposed and putative addition to Atlantic Euro-cohesion to a versatile symbol of NATO’s “forward defence” against Russia. It was game over from the start.

In Samarkand, the world heard a defiant statement that countries – which make up more than half of the world’s population – are no longer willing to rely on the United States. Participants included Russia, China, India, Turkey, Iran, Pakistan, Egypt and Saudi Arabia – representing just over half of humanity and states that growing much faster than others in the world”.

Chinese President Xi Jinping jointly presented China and Russia as “responsible world powers” determined to ensure the emergence of multipolarity and rejecting the arbitrary “order” imposed by the United States and its unipolar worldview.

This construction of multipolarity reflects the twin filiation of Samarkand of an SCO whose founding charter of 2001 reflects the “three “no’s”: no alliance; no confrontation and no targeting of a “third party” – merged with the previous values ​​of the Non-Aligned Movement of respect for sovereignty, autonomy and non-interference in the affairs of other states.

The Global Times (from China) abstract thus: “China and Russia have united to resist the political virus of the United States and the West, while opposing hegemonism… The outbreak of the Russian-Ukrainian conflict is fundamentally the consequence of the failure of the Western military and political bloc to manage relations of equality with a regional power.

This last comment sums up China’s position on Ukraine: “The latter has emerged as a contentious issue, due to the Western refusal of diplomacy – and is an artificial construct mounted by the United States”.

Yes, China and India are opposed and sensitive to secessionism, but both admit that the Ukrainian attack on the DLRP was contrived. However, the transition as clearly described by Putin “towards terrorist attacks is serious business”. Putin warned: “In fact, it is about using terrorist methods. We see it in the killing of officials in the liberated territories, we even see attempted terrorist attacks in the Russian Federation, including – I I don’t know if it was made public – attempted terrorist attacks near our nuclear facilities, power plants of the Russian Federation. I’m not even talking about the Zaporozhye nuclear power plant”.

China and India are actually more concerned with terrorism than with secession. This “turn”, paradoxically, had the effect of hardening their support for Russia.

Samarkand – contrary to the Western view – highlighted the emergence of strategic political partnerships between key states, notably that between Russia and India (Modi called it an unbreakable friendship). What then happened in the bilateral relations between Putin and Xi? Well, “Nothing of primary importance, strange as it may seem” in Putin’s own words. “It was actually a routine meeting between us. We haven’t met in person for a while.”

A handful of energy and trade projects (like Pakistan asking Moscow for a gas pipeline) have been “embedded” in the structure of a trade order outside the dollar sphere, using their own currencies. Disregard for sanctions was a message that rang out loud and clear.

Russia and China have warned the West that Iran not anymore will be treated as a pariah state. Iran is emphatically welcomed by Putin and Xi as a member of the SCO. Going forward, this means that Iran will do business with all SCO members under the rubric of a new financial order arranged by Russia, China, India and Brazil.

A gloomy note was heard in this optimistic gathering, however: President Putin warned that the reaction of the “Polar Order” to these “fundamental and irreversible changes” had become “ugly”. He suggested that this reaction from the United States was a source of concern among participants and should be addressed. Notably, the Russian President pointed to the increase in “terrorism” emanating from and coming from Ukraine (implying that this, if continued, would meet a serious response). And President Xi added his warning that the West is planning a wave of color revolutions.

Indeed, while Ukrainian forces continue to agitate, terrorist actions – such as the assassination of Russian-appointed civilian administrators – are clearly aimed at making up for a lack of military success and projecting the impression that “Ukraine is going on the offensive”. ‘. To which Putin commented:

“As for our response withheld, I wouldn’t say it has been withheld, although after all a special military operation is not just another warning, but a military operation. In this context, we are witnessing attempts to carry out terrorist attacks and to damage our civilian infrastructure. Indeed, we’ve been quite restrained in our response, but that won’t last forever. Recently, the Russian armed forces have dealt some serious blows in this region. Let’s call them warning shots. If the situation continues like this, our response will be more impactful”.

It is in this context of deteriorating security that the Chinese Global Times do his point “what if” — a reflection that could prove to be a harbinger of changes to come:

“Imagine if the international community didn’t have another force powerful enough to really step in, balance, protect and even reverse the situation in the direction of maintaining global peace and stability.”

This, it seems, is Putin’s view: NATO’s reaction in Ukraine has “gone ugly”. The escalation to a NATO war waged there, in an effort to preserve its unipolar ‘moment’, risks escalating into a wider war – even if the West may not be able to to lead it.

So we come to the second order of displacement of spatial geography that takes place in tandem. It too uses Ukraine as a pretext: to “save Ukraine” as a symbol of the “contemporary” values ​​that Europe imagines itself to represent, the European Union has politically subordinated itself to Washington. It placed its policy of autonomy and security in the hands of NATO. Europe is effectively now a complement, a province within American politics at large.

The Ukraine pretext also serves as fodder for a squad of clear-eyed European climate fanatics who see the energy crisis as an opportunity to impose the de-fossilization of Europe, via an imposed command economy – thus placing the European energy policy, also under Washington’s tutelage.

This latter position – embracing energy rationing – effectively allows the United States to fully assimilate Europe into the American economy. It is no coincidence that the euro and the dollar are trading at parity today. A euro, eurodollar and sovereign debt crisis is unfolding along with the energy and economic crisis; second, they impose such structural pressures on the Eurosystem, which could see its ultimate fracture

It is not so much about voluntary political decisions by member states to leave the eurozone (although that could happen), but about structural pressures giving no alternative – in the sense of pointing a “gun to the head”. Yes, there could be a smaller, tighter euro, with weaker states’ debt siphoned off to a “bad bank”, while good assets are sold for pennies. Basically call it the euro, if you will, but in the future it will actually be the dollar.