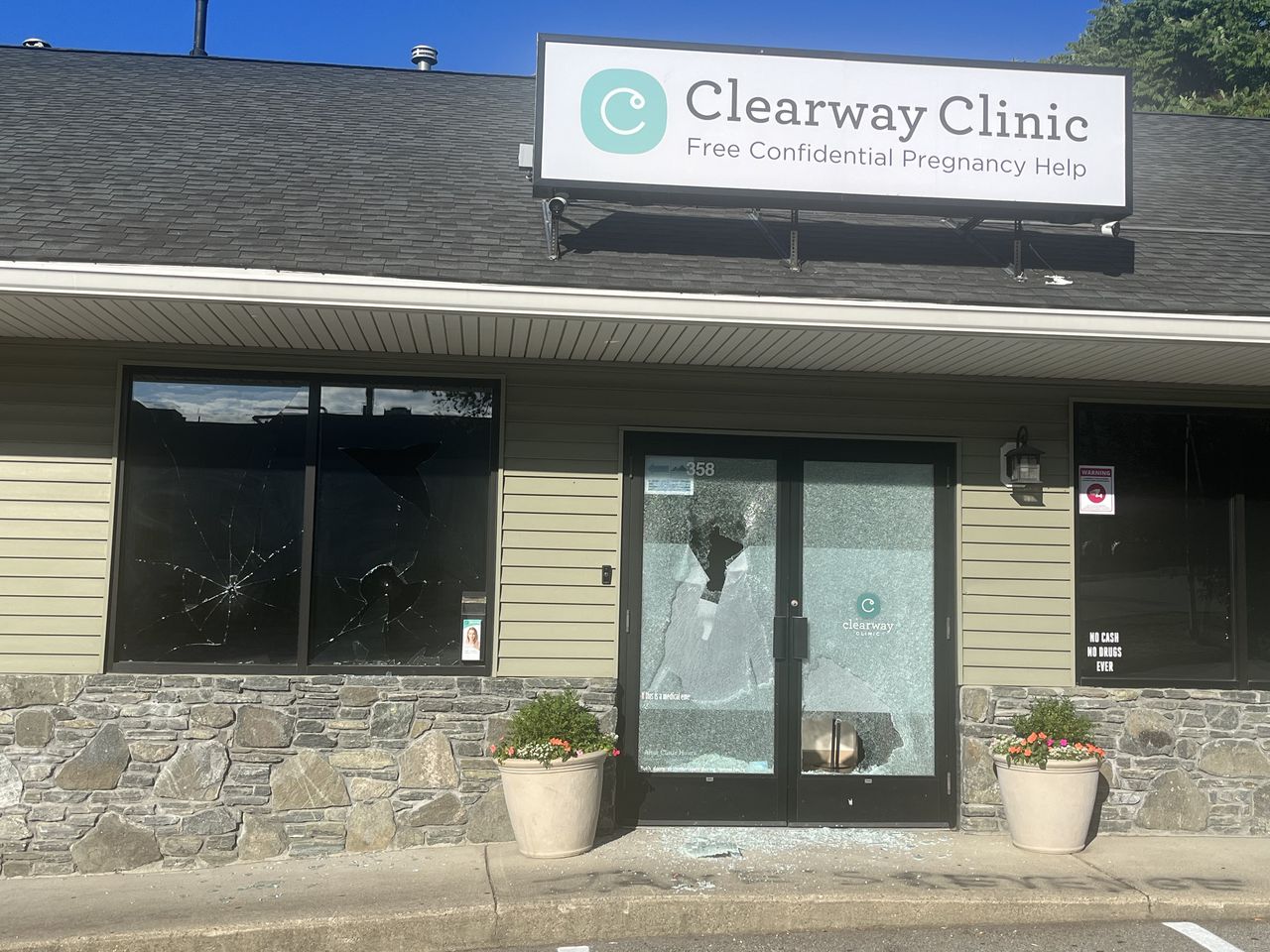 In response to vandalism uncovered at its Worcester site on Thursday, Clearway Clinic executive director Kelly Wilcox released a statement condemning the incident as a “domestic terrorist attack”.

The clinic was found vandalized on Thursday morning with smashed windows and a spray-painted message of “Jane’s Revenge” on the floor outside its doors.

Problem Pregnancy, which is located at 495 Pleasant St. in Worcester, was also targeted and found blue and yellow paint on its windows and roofs. A spray-painted red message of “Jane’s Revenge” was also found on the pavement ahead.

The two targeted locations are crisis pregnancy centers that pose as legitimate reproductive health care facilities and aim to deter people from having abortions.

The vandalism comes nearly two weeks after the Supreme Court overturned Roe v. Wade, a 50-year-old ruling that legalized abortion nationwide and is part of a trend of attacks on pregnancy crisis centers across the country after the ruling was overturned.

The vandalism at Clearway Clinic took place around 2:30 a.m. Thursday, according to Wilcox’s statement.

“We are deeply saddened that misunderstandings about what we do have led pro-abortion extremists to target our center,” the statement read. “However, we are committed to continuing our mission to serve women in our community.”

The message claims that the organization has been providing assistance to the central and western regions of Massachusetts for 22 years.

“We are a state-licensed medical clinic with a team of board-certified physicians and nurses that provides free health care to women in central and western Massachusetts. Our center is committed to 100% transparency in all marketing practices and patient interactions,” said Wilcox. “We do not provide or refer to abortions and we take care to disclose that fact before scheduling appointments. Patients must also sign a service authorization form that clearly indicates this fact.

In bold and underlined, Healey’s consumer advisory notes that Crisis Pregnancy Centers “do NOT provide comprehensive reproductive health care” and that many are “NOT licensed medical facilities.” Although employees may wear white coats, they are generally not licensed doctors and nurses, including those who perform ultrasounds, the notice said.

According to American Medical Association Journal of Ethics. The staff of these centers are not trained by health professionals.

Clearway Clinic is one of the first results when you google “worcester abortion care”.

A list of services outside of her Worcester clinic include pregnancy confirmation, nurse consultation, limited obstetric ultrasound, advice on options and post-abortion recovery support.

The clinic, which is incorporated, is designated as a religious entity with the corporations division of the state.

The clinic provides brochures outside its front door. The brochure says the clinic is “privately funded through contributions from hundreds of individuals and organizations.”

A section of the pamphlet is titled “Abortion Hurts: Clear the Way for Your Future”.

At the end of Wilcox’s statement, she asks state officials to condemn the vandalism of the Clearway location in Worcester.

“We call on our state officials to publicly condemn the domestic terrorist attack against our organization,” she wrote. “Violence against our center harms women, babies and families who rely on us for help when needed.”

Following the overturning of Roe v. Wade, the Department of Homeland Security issued a memo to government officials and law enforcement stating that a warning that churches, judges, and abortion providers may be at increased risk of violence” for weeks” in response to both the ruling, according to the Washington Post.

“DHS said the group allegedly claimed responsibility for the vandalism of a building housing the campaign office of a congressman and an anti-abortion group, and for at least three arson attacks since May targeting anti-abortion organizations. -abortion in Oregon, New York and Wisconsin,” the Post wrote.

The designation means the anti-abortion group will be treated with the “same restrictions on expression against ‘praise, support and representation’ applied to the Islamic State and Hitler”, The Intercept reported.

Terrorist groups are given Meta’s strictest “Level 1” limits of expression, which Meta says are reserved for the world’s most dangerous and violent entities, as well as hate groups, drugs and mass murderers, The Intercept reported.

This is not the first time pregnancy crisis centers in Worcester have been vandalized.

Problem Pregnancy had its windows smashed and a fence spray-painted with the words ‘fire next time’ as well as a symbol of anarchy in April 2011, according to a Telegram and gazette report.