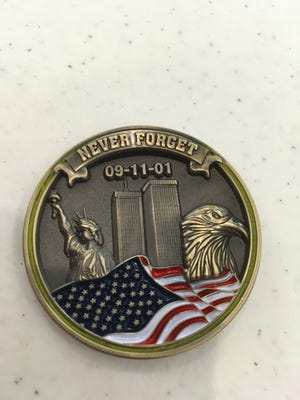 Dallas will commemorate the 20th anniversary of the September 11, 2001 terrorist attacks with a special town square ceremony on Saturday September 11 at 6:30 p.m.

The ceremony has a dual purpose, according to Starletta Hairston, a retired flight attendant who sits on the memorial committee that organizes the event.

“Number one, we want to take a moment and remember all of those who lost their lives that day,” she said. “And, number two, we want to honor the courage of the firefighters, police officers and first responders who risked their lives doing their duty.”

Jim Bailey, owner of Sammy’s Neighborhood Pub in downtown Dallas, and director of parks and recreation Brandon Whitener, first spoke about the need to commemorate the 20th anniversary of September 11 in April.

“The response from the community has been simply exceptional,” said Whitener. “Businesses, city leaders, all of our public safety agencies have really come together to make this happen.”

Hairston said her career as a flight attendant, from which she retired a few years ago, gives her special empathy for those who perished in the attacks.

“I was off duty that day,” she said. “I was at home watching it on TV like everyone else. But it really shocked my kids who never wanted their mom to get on a plane again.”

Subscriber exclusivity: “We are losing this war” on veteran suicides, says man from Gastonia

Those with unique 9/11 stories to tell, such as the loss of a loved one or the on the run, are welcome to share these stores at a special web address: [email protected]

The ceremony will open with a prayer led by Reverend Curtis Wilson, after which the Gaston County Sheriff’s Honor Guard will present the colors.

Hairston will lead the rally in the Pledge of Allegiance, while Ron Teague will discuss the events of 9/11 and lead the group in a moment of silent remembrance.

Each member of these groups will receive a commemorative coin and the coins will also be available for purchase, with all proceeds going to fund future 9/11 memories.

The ceremony will end with “The Star-Spangled Banner” and the blessing led by Reverend Frank Milton.

At the end of the remembrance ceremony, the mood will brighten considerably as a free concert will be presented by famous soul group, The Chairmen of the Board.