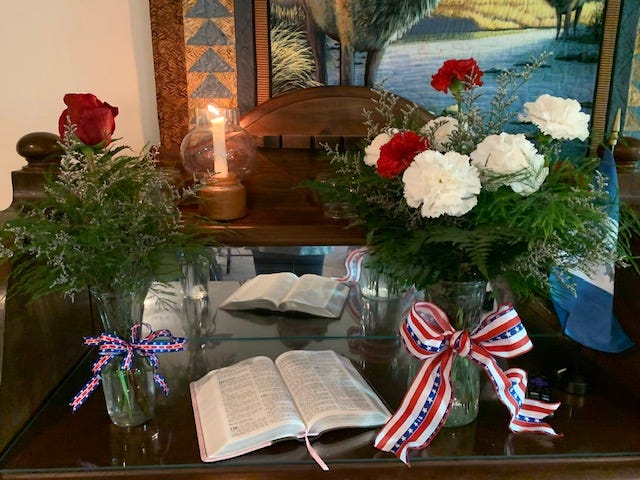 Jane Bain Alliance Chapter of the Daughters of the American Revolution marked the 20th anniversary of the terrorist attacks of September 11, 2001, with a program presented on September 11 at Alliance Elks Lodge.

Chaplain Michal Barrett presented the â€œMemorialâ€ program in honor of the 9/11 dead and in remembrance of section members who have died in the past decade. The regents honored were Carolyn Miller, Evangeline Case and Marilyn Snode; and members Marilyn Brumbaugh, Arden Tuttle, Betty Devies, Arlynne Fetterolf, Helen Potts, Bonnie Somers and Miriam Wendell.

During the meeting, members approved the addition of Carolyn Crites to the organization.

Members are beginning to work on the section’s Wreaths Across America project and will contact businesses and individuals in the community to sponsor or purchase wreaths to place on veterans’ graves at Alliance City Cemetery.

This is the second year of the section in the national curriculum. A wreath laying ceremony, open to the public, will take place on December 18 at noon at the Veterans Memorial in Alliance City Cemetery.

Members Becky Blanchard and Crites collect items for the Ohio DAR Project Patriot to donate to USO / Afghan Refugee Support. The USO is supporting troops deployed for Operation Allies Refuge in Afghanistan. Items needed include non-perishable foods and personal hygiene items. Members were asked to bring their donated items to the October meeting. Non-members who wish to donate can email Becky Blanchard at [email protected]

Member Dianna Fugate will be collecting clothing donations for the Crossnore School during the October meeting. Member Deb Hughes has indicated that she will have quilts ready to be tied to send to the SAM Center.

The group will then meet at 9 a.m. on October 8 at Alliance Elks Lodge, 600 Glamorgan St. Those wishing to attend should contact Regent Dee Grimm at [email protected], or contact Facebook, at the Jane Bain Chapter, National Society Daughters of American Revolution, Alliance, OH.