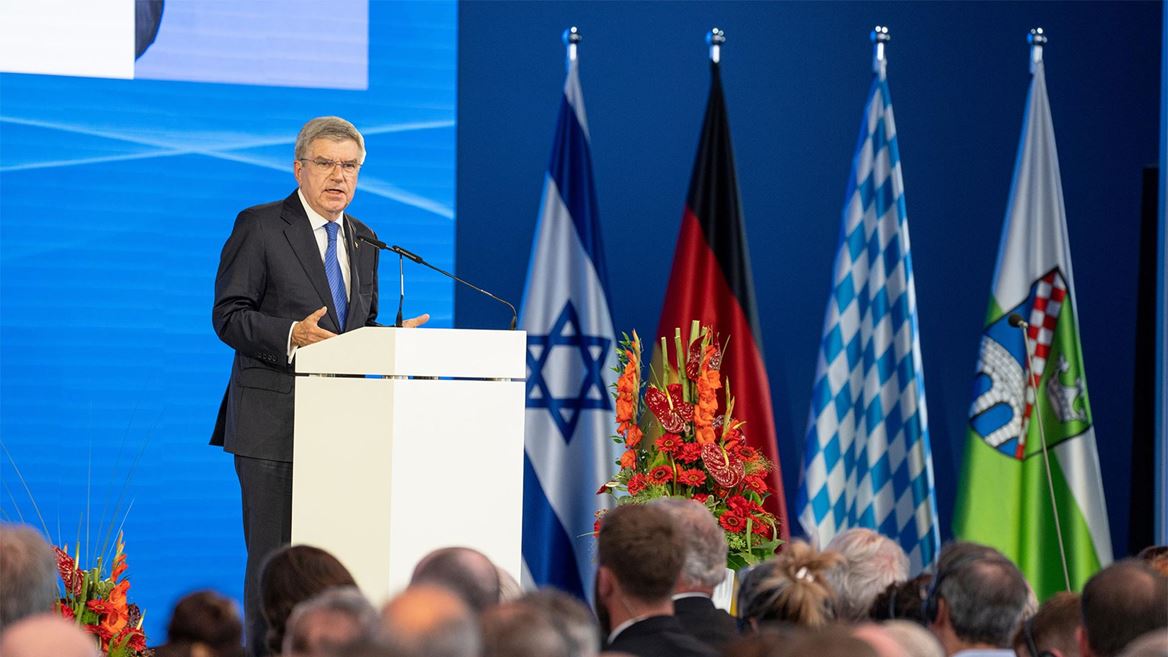 Sep 05, 2022 – The 50th anniversary of the terrorist attack on the Israeli Olympic team at the 1972 Munich Olympics was commemorated today in Munich’s Olympic Park and at Fürstenfeldbruck airfield, where the events took place in 1972. The attack ended with the death of 11 members of the Israeli team and a German policeman.

IOC President Thomas Bach was one of the speakers at the ceremony in Fürstenfeldbruck, hosted by the German government. The ceremony took place in the presence of the German Federal President, Frank-Walter Steinmeier, and the President of Israel, Jitzchak Herzog, who both addressed the audience. The families of the victims and the President of the National Olympic Committee (NOC) of Israel, Yael Arad, also participated. The European Olympic Committees were represented by Daina Gudzineviciute, IOC member, and the German NOC by its President, Thomas Weikert.

“September 5, 1972 was the darkest day in Olympic history. What began so peacefully and joyfully ended in inconceivable suffering. We share the pain of the relatives of the 11 Israeli victims and of the German policeman. To this day, this barbaric attack fills us with horror, shame and disgust,” IOC President Bach said in his speech. (Please find his full speech here.)

Thomas Bach recalled that the meaning of the Olympic Games is the peaceful celebration of “the unity of humanity in all its diversity, regardless of political or cultural differences”. He concluded: “For this reason, this attack was also an attack on the Olympic Games and the Olympic values. The moment of silence shared with hundreds of millions of people around the world at the opening ceremony of the Tokyo 2020 Olympic Games made this clear. Today, once again, we bow our heads in honor, tribute and deep respect for the victims. We sympathize with loved ones. We share their grief: the murdered members of the Israeli Olympic team were, are and always will be part of our Olympic community.

Despite this terrible loss, neither relatives nor the National Olympic Committee of Israel turned their backs on the Games. Israeli athletes have in fact participated in all subsequent Olympics, the IOC president said.

Concluding his speech, he reminded everyone that the Olympic Games unite the whole world in peaceful competition. “That is why our commemoration ceremony today has an even deeper meaning: we stand together, united in our remembrance, but also in our commitment to the peace mission of the Olympic Games. In this way, we show that the values ​​of human solidarity and peace are stronger than all the forces of hatred and division.

Earlier in the day, a ceremony was also held in Munich at the memorial commemorating the victims of the terrorist attack. The IOC laid a wreath. Israeli NOC President Yael Arad said Israeli victims are always “a source of strength and inspiration for every young athlete who represents Israel on the international stage, and every performance and achievement is part of the legacy left behind. by members of the delegation to the 1972 Munich Olympics.