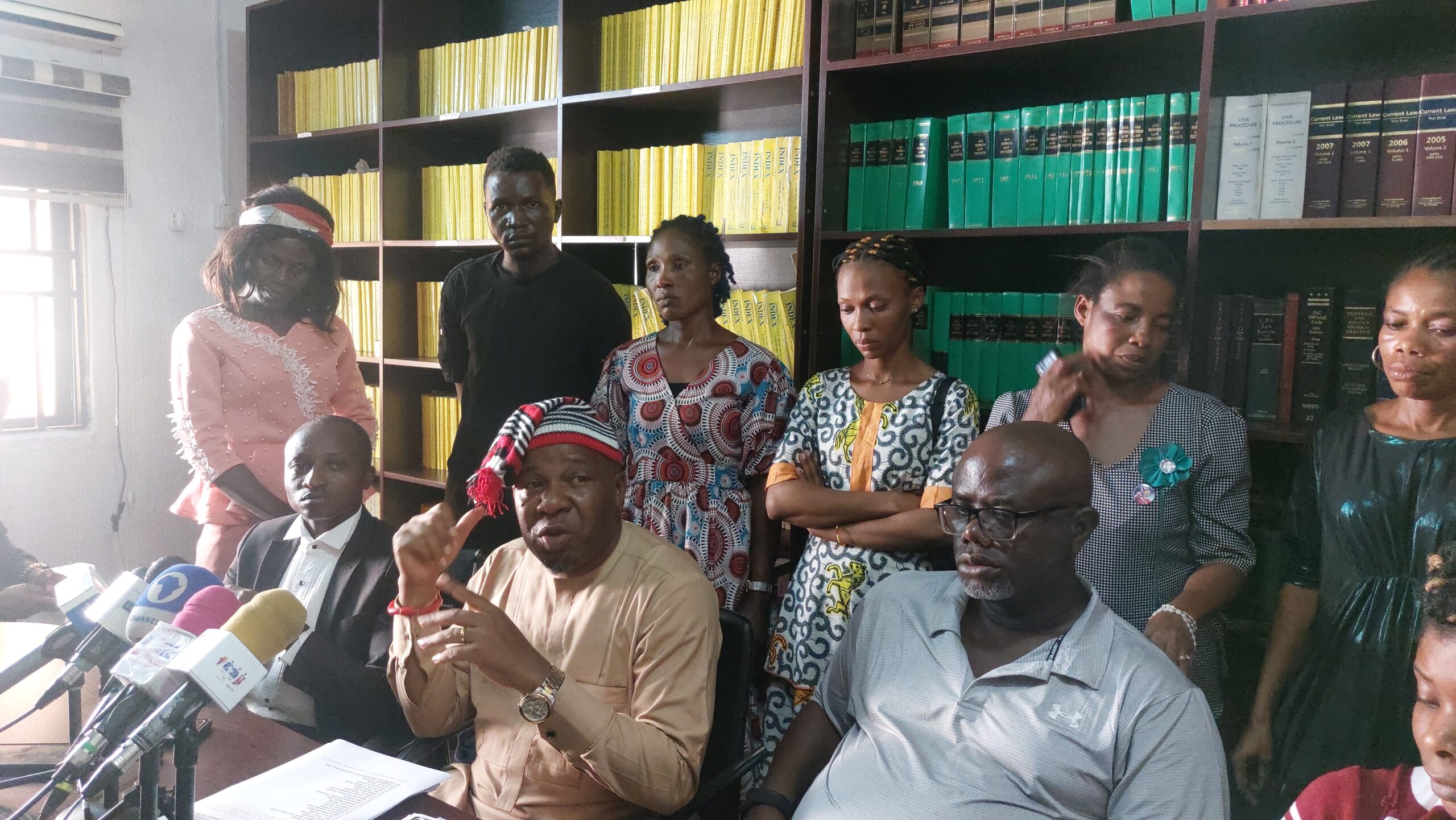 Relatives of 24 alleged members of the outlaws Indigenous peoples of Biafra (IPOB) besieged Abuja on Monday, demanding their immediate release.

Speaking on behalf of the aggrieved families at a press conference in Abuja on Monday, Nnaemeka Ejiofor, lawyer for IPOB chief Nnamdi Kanu, said the detainees were being held by the State Security Service ( SSS) and the Nigerian Army.

Mr Ejiofor said many of the victims of the arbitrary arrest and detention “became victims of enforced disappearance in the custody of the Nigerian secret police and military”.

He revealed that Pius Awoke, a member of the legal team representing Mr Kanu, was abducted by SSS agents while returning from Abuja to his base in Ebonyi State last year.

According to Ejiofor, the detainees comprising men and women of Igbo and Ibibio origin in southern Nigeria have been accused by the federal government of being members of the IPOB.

He lamented that their fate remains unknown.

“How some detainees were arrested”

Recounting the circumstances surrounding the arrest of the detainees, Mr. Ejiofor said, “Mr. Awoke and 10 of his colleagues were among those who came from Ebonyi State in eastern Nigeria to attend the trial of Mazi Nnamdi Kanu on July 26, 2021″.

After proceedings in the Federal High Court in Abuja, Mr Awoke and others boarded two vehicles heading to Ebonyi State to be intercepted by a navy unit stationed in Lokoja, State. of Kogi, Mr. Ejiofor said. “They were held at the checkpoint for more than five hours until an SSS team came to take them back to Abuja.”

He said: “After being prosecuted to challenge their arrest and detention, the army reportedly transferred them to WAWA military barracks in Niger State”, denying their lawyers and families access to the suspects. .

Another suspect, 20-year-old Joy Udoh (Idara Gold), reportedly went to celebrate her birthday with her fiancé when SSS agents stormed the fiancé’s house in search of the fiancé, Chuks Egwuatu.

While her fiancé’s siblings were released after approximately five days in detention; Ms Udoh was transferred to the spy agency’s Abuja office on November 16, 2022.

“None of these victims of enforced disappearance has received anything resembling a trial since their arrest,” Mr Ejiofor said.

He advised the federal government “to do the right thing by producing these victims and releasing them to their families with an apology and compensation, because it is not a crime to demand self-determination.”

Mr. Kanu himself is still being held by the SSS against a court order.

Last Thursday, October 13, PREMIUM TIMES reported that the appeals court had ordered the release of Mr. Kanu from SSS custodywhere IPOB has been held since he was brought back to Nigeria.

The court, in a unanimous decision, ruled that the extradition of Mr. Kanu from Kenya in June 2021 to Nigeria without following extradition rules constituted a gross violation of Nigeria’s extradition treaty and a violation of fundamental rights of the leader of the IPOB.

The separatist leader was charged with various offenses in the 15 counts, including treason and terrorism, offenses he allegedly committed during his national agitations in Biafra.

Despite the Court of Appeal’s order ordering the release of Mr. Kanu, the Nigerian government has still not complied with the judgment at the time of filing this report.

He revealed that the government was considering his legal options and may bring further charges against him.

Although the government has the right to appeal the court’s decision, lawyers say it has no legal basis to continue to detain him in the absence of any new court order detaining Mr Kanu.

After a confrontation with members of the IPOB and an escalation of violence in the South Eastern States, the federal government obtained on September 20, 2017 the order of the Federal High Court of Abuja for the proscription of the group in as a terrorist group.

In June last year, the federal government brought in Mr Kanu from Kenya, a decision the Court of Appeal ruled illegal, so it nullified the charges against him in Nigeria.

Of Nigeria’s many national challenges, which do you think the next president should focus on first?

Investigate the case of an official involved in a terrorist network: MPR