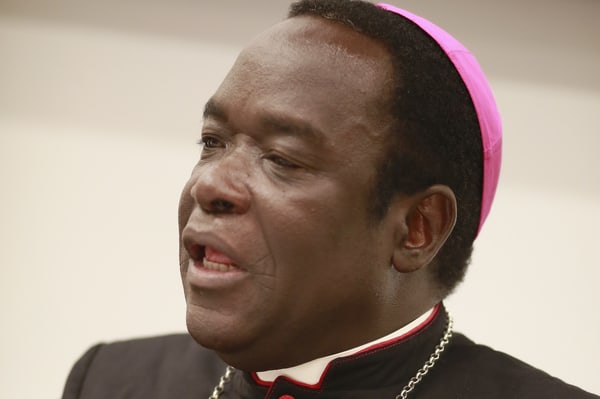 Sokoto Diocese Bishop Mathew Kukah said the federal government seems more determined to rehabilitate “so-called” repentant terrorists than to free the children and others they abducted.

Social critics said so in his Easter message delivered at a Sunday mass service in Sokoto, Sokoto State.

Kukah said that when the federal government led by President Muhammadu Buhari announced the purchase of sophisticated weapons for the fight against terrorists, hopes rose that the fight against the insurgency was over, adding that Nigerians do not had no doubts about the army’s ability to do so.

He, however, said the military could not get past the body language of Commander-in-Chief President Buhari.

He said: “With the news of the purchase of new sophisticated weapons, we hoped that the President and the military would quickly put in place a strategy to eradicate this cancer that had afflicted our country.

“The general feeling was that the army had the capacity to put an end to this tragedy.

“In reality, the military cannot shoot beyond the radar set by their commander-in-chief.

“If the President can end this tragedy, he will immediately gain the support of all citizens and hopefully leave office with his head held high.”

Kukah, however, said that rather than the newly acquired weapon resolving the insurgency battle, there was an increase in cases of kidnapping, banditry and other crimes, advising Buhari “to admit that it was in his power to decide how we were going to end the war”. which had swallowed up and was destroying our nation”.

He added: “It seems the federal government has shown a far greater commitment to integrating so-called repentant terrorists than to recovering our children from kidnappers or keeping our universities open.

“Early last month, Operation Safe Corridor announced that it had graduated 599 members of various terrorist groups who had learned new skills and were now ready to integrate into society.

“The total is over a thousand now.

“It is plausible to note that the program involved psychosocial support, rehabilitation, vocational training, skills training and start-ups.

“The biggest problem is that their various communities had expressed their reluctance to receive their wayward sons.

“As a priest, I cannot be against a repentant sinner or criminals who change their ways.

“After all, the doors of forgiveness must always remain open.

“However, in this case, Nigerians have very little information about the whole rehabilitation process.”

Are the Nigerian bandits a new cell of Boko Haram or rival “terrorists”? | Features