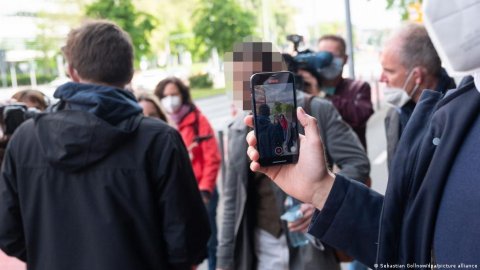 Franco A.: The double life of a German far-right soldier

All eyes are on this Thursday on Frankfurt, on the trial of Franco A., a Bundeswehr soldier accused of fomenting a terrorist attack by posing as a Syrian refugee. Last week, he was taken into custody for new evidence.

Bundeswehr soldier Franco A.* has been on trial since May 2021 for preparing a “serious act of violent subversion”. He allegedly planned to carry out terrorist attacks targeting public figures while posing as a Syrian refugee and blamed the attacks on asylum seekers.

Frankfurt Higher Regional Court said on Monday (14.2.2022) that the 33-year-old, who has been free during his trial so far, is back in custody after a routine check at a train station found in his possession unnamed objects that could be used as evidence. It remains unclear whether the check was carried out at random or whether Franco A. had been targeted for the check. According to the media, the terrorist suspect resisted the officers.

Prior to his arrest on Sunday, Franco A. was required to report regularly to authorities and half of his salary was withheld. At a special closed-door hearing on Monday, authorities concluded he should be considered a flight risk.

First arrested by German authorities in April 2017, Franco A. was remanded in custody for seven months, until a court ordered his release at the end of November 2017, as the court found “no urgent suspicion” that he was preparing to commit a criminal act against the State. He admitted to owning a number of weapons, but dismissed claims that he was planning an attack. The case has sparked scrutiny from a network of far-right extremists in the German military.

A file with an international dimension

Prosecutors believe the former Bundeswehr officer took weapons and explosives from the German military to carry out attacks on targets including high-ranking politicians.

Franco A., already a career soldier, was first apprehended by Austrian authorities as he tried to retrieve a French pistol and ammunition he had hidden in a bathroom at Vienna airport.

After checking his fingerprints against a database, authorities discovered that the man, born to an Italian father and a German mother in the Hesse region of Germany, was actually registered as a Syrian refugee living in Bavaria. Despite the fact that he barely spoke Arabic and was supposed to serve full-time at a Bundeswehr base in Alsace, no one realized he was leading a double life.

The Austrian authorities let Franco A. go and the German authorities opened a secret investigation, during which they found evidence of his far-right ideology in recordings, videos and tens of thousands of texts on the courier services used by Franco A.

He was charged with “preparing a serious act of violent subversion”, that is, suspicion of terrorism, but let go.

Federal prosecutors believe the weapons were to be used in attacks on politicians and public figures Franco A. considered “pro-refugee.” Authorities found lists with the names of then-Justice Minister Heiko Maas, Deputy Speaker of the German Parliament Claudia Roth, and human rights activist Anetta Kahane, among others. Authorities assume his plan was that the acts of violence would be attributed to his false Syrian identity.

In 2017, First Lieutenant Franco A. was a member of the Franco-German 291st Infantry Battalion stationed in Illkirch, near Strasbourg. Before becoming a soldier, he defended a master’s thesis in a French military academy on the “mixing of races” and the “dissolution of ethnic groups”. In 2014, the French warned their German colleagues against the man’s right-wing ideological bent, and a German historian concurred with the French assessment.

But his superiors in the Bundeswehr simply issued a warning and he submitted a new version of the thesis. The Bundeswehr also did not inform the military intelligence service (MAD) of the incident.

Then-German Defense Minister Ursula von der Leyen initially reacted to the scandal by condemning what she called a “false understanding of esprit de corps”. She then visited Franco A.’s barracks in Illkirch, accompanied by journalists from Berlin, where a hand-painted swastika and memorabilia from the Nazi-era German army, the Wehrmacht, had been found.

Von der Leyen then ordered the inspection of all Bundeswehr barracks and decided to revise the so-called Traditionserlass (Edict of Tradition) in an effort to further steer the current German military away from Wehrmacht war crimes. .

Since spring 2018, individuals from previous armies can only be deemed worthy of honor if they exemplify the values ​​of today’s Bundeswehr.

The Bundeswehr has since remained in the headlines due to alleged far-right extremism within the ranks. In July 2020, the Ministry of Defense disbanded a company of the German Army’s elite Special Commando Forces (KSK) after several far-right incidents were reported. Bundeswehr special forces then made headlines again when it emerged that they were unable to locate the missing weapons.

In the meantime, Franco A.’s affiliations began to emerge. Maximilian T., his friend and comrade in the Bundeswehr, was drawn into the investigation, which caused a political stir because he also worked part-time for parliamentarian Jan Nolte of the far-right populist Alternative for the Germany (AfD). The MP told DW in 2018 that he viewed Maximilian T. as a “victim of a politically motivated attack”.

Errors of the Refugee Authority

The case of Franco A., however, remains unique because of his attempts to pass himself off as a Syrian refugee. In November 2015, Franco A. applied for asylum at the Federal Office for Migration and Refugees (BAMF) under the name of David Benjamin, claiming to be from the Aleppo region in northern Syria.

His 2016 asylum hearing was conducted in French. He had said that he was a Christian, that he spoke better French than Arabic and that he felt threatened in his country of origin. He received the subsidiary

protected status and began collecting benefits as an asylum seeker, in addition to his full-time job as a professional soldier in Alsace, 300 kilometers away.

The refugee office later acknowledged that “glaring errors” had been made at every step of the process, but found no evidence of “deliberate manipulation”.

The BAMF then conducted follow-up investigations into 2,000 Syrian and Afghan refugee cases and issued a green light on safety standards.

The start of the trial was repeatedly delayed due to questions about whether the evidence was strong enough. The trial against Franco A. has proven tricky, as there are dozens of relevant files containing complicated and conflicting information, and there is little clear evidence that he actually planned to carry out an attack under his Syrian identity.

If convicted, Franco A. faces up to 10 years in prison.

This article was originally written in German. It has been continuously updated since it was first published in 2018.

*Editor’s Note: DW follows the German Press Code, which emphasizes the importance of protecting the privacy of suspected criminals or victims and urges us to refrain from revealing full names in such cases.

DW is not responsible for the content of external websites

The Man Nobody Knows Who Changed Boston