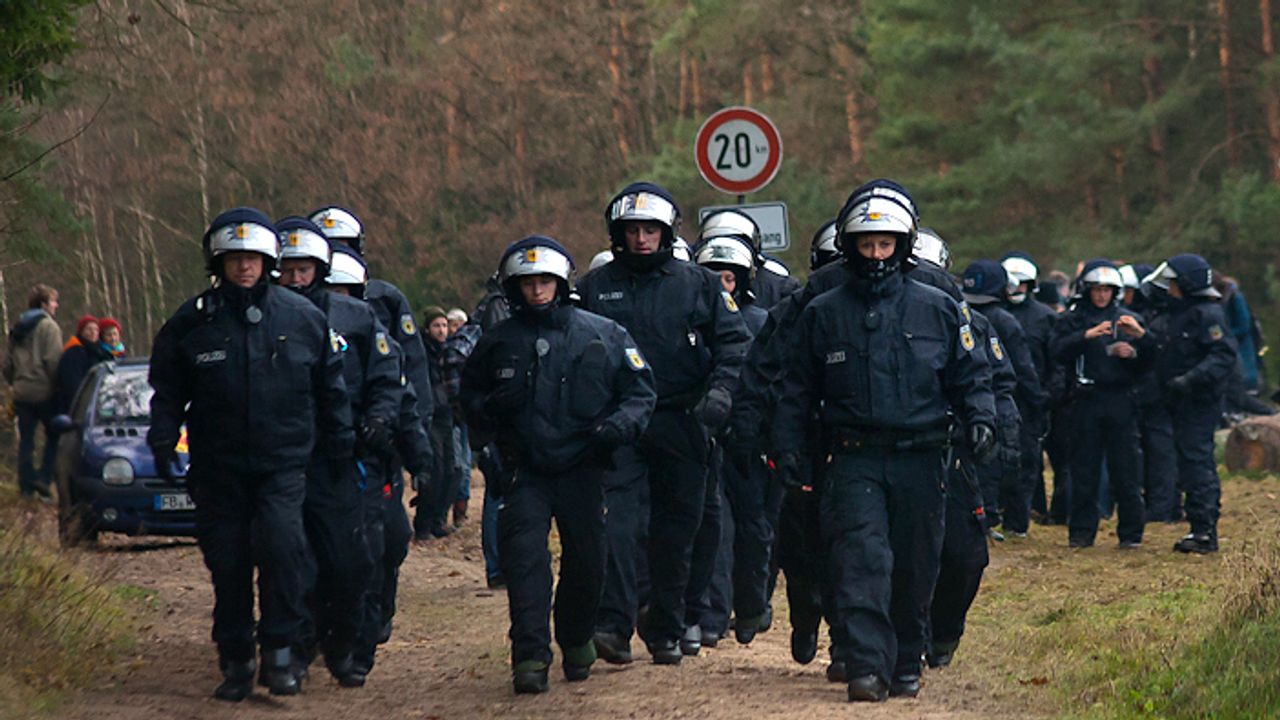 There have now been 53 confirmed cases of far-right activity in the police force in North Rhine-Westphalia, Germany’s most populous state. This was announced by the state interior ministry in DÃ¼sseldorf following inquiries by the Deutsche Presse-Agentur (dpa).

A year ago, far-right focus groups and images found on the cell phones of police officers in MÃ¼lheim an der Ruhr / Essen shocked the public.

In a video, which was then sent to colleagues, a policeman exposes bullets from his service weapon in a swastika. Another snapshot sharing via WhatsApp of Christmas decorations with SS runes and the inscription “Sieg Heil”. A patrol officer stood with his legs spread on the roofs of two service vehicles and gave the Hitler salute. Another video shows the same policeman and others singing the first forbidden verse of the Deutschlandlied while traveling in their police vehicle.

Over the following months, the scandal of the far-right police focus groups escalated. For example, the forbidden Horst Wessel Lied, the war song of Hitler’s SA and the subsequent anthem of the NSDAP (Nazi Party), were found on seized data storage devices.

During the investigations, more and more suspected cases were added. In early November 2020, 147 police officers and four employees of the Office for the Protection of the Constitution (as the secret service is called) in North Rhine-Westphalia were under investigation. By the end of September this year, the number of suspected cases reported had risen to 275.

The evaluation of the vast amount of data entered during the search for suspects revealed the most vile crime images and films. On September 18, 2020, World Socialist Website commented on this, saying their content is “inappropriate described as an agitation against refugees, fascist filth and trivialization of the Nazis”.

The footage included refugees screaming into a gas chamber and a man on a bicycle pointing a gun at a black youth who was trying to escape from him.

Since then, the state government of North Rhine-Westphalia (NRW), a coalition led by the failing Christian Democratic Union (CDU) chancellor candidate Armin Laschet, along with the Free Democratic Party (FDP ), sought to downplay the scale of the far right. networks. Asked by dpa, the State Ministry of the Interior, headed by Herbert Reul (CDU), responded with the following assessment: â€œThe suspicion of right-wing extremism had been confirmed in 53 of the cases investigated, which had already been the subject of a conclusive investigation and punished. The suspicions had not been confirmed in 84 cases. These cases have also been the subject of a conclusive investigation. In 138 cases, the investigation was still ongoing.

The consequences for the police officers concerned are negligible. Six police trainees were made redundant. Two dismissals and three warnings were issued in the context of labor law proceedings.

The rulings also show that cases of right-wing extremism among the police and in the state apparatus that have been uncovered that may violate criminal law are systematically downplayed and covered up. The police officers concerned generally escaped unscathed under criminal law because the courts classified WhatsApp chats as “private communications”. Relevant criminal offenses, such as the dissemination of illegal symbols (for example, the swastika), therefore did not apply, reports dpa.

Last year, a policewoman from MÃ¼lheim / Essen successfully continued her suspension. In her case, the court concluded that Hitler’s cell phone video was a “parody”.

The cases of right-wing extremism that have been uncovered among the NRW police, the extent of which is now hidden, are just the tip of the iceberg. The same goes for many similar cases in Hesse, Berlin and other German states.

While particularly egregious cases come to light, there are brief hypocritical expressions of outrage on the part of the state. Then they are minimized as individual cases and to overcome them as quickly as possible. Nevertheless, new cases continue to be reported.

For example, almost at the same time as the results of the far-right focus group investigation were announced by the NRW police, there was a raid in Aldenhoven, in the DÃ¼ren district. A huge cache of weapons, including firearms, explosives, hand grenades and mines, was discovered at the home of a 32-year-old man, believed to be a senior officer and explosives expert of the Bundeswehr ( armed forces).

The man was initially investigated for violating the Foreign Trade and Payments Act because he shipped a package containing mufflers. Now the charge of violating the Weapons Control Act has been added and he has been remanded in custody. So far, nothing is known about his political motivation. Since unknown chemicals were also discovered in the house, experts from the Federal Office for Radiation Protection were called in to assess the situation. Some of the explosives found detonated on the spot.

At the beginning of October, it became known that far-right incidents had also occurred within the elite â€œFederal Republic Guardâ€ of the Bundeswehr. This battalion stands guard during state visits, among others. In the center, there is a regrouping within the 2nd Company which is called the â€œWolf Packâ€. These are far-right incidents, disgusting initiation rituals, violence and sexual assault.

Even before that, a soldier’s contact with the fascist identity movement had drawn attention. In addition, a battalion soldier allegedly had his picture taken in the uniform of Hitler’s Wehrmacht (army). Both had been banned from performing their duties.

Even before a further investigation could take place, Federal Defense Commissioner Eva HÃ¶gl (Social Democratic Party, SPD) said after a visit to the guard battalion that she had “a good impression” of the investigation. “So far there is no confirmation of an entrenched far-right group within the Guard Battalion.”

For example, since the start of 2017, there have been 319 investigations into suspected right-wing extremism in state-level authorities (police, state criminal investigation offices, secret services). At the federal level (including the Federal Police, Federal Criminal Police Office, BKA and Customs), there were 58 suspected cases, and 1,064 in the Military Counterintelligence Service (MAD). MAD’s investigations were mainly linked to the Bundeswehr, where the number of suspected far-right cases increased by a third between 2018 and 2019.

The report of Mediendienst integration cites numerous racist and far-right incidents in security agencies between 2017 and October 2021. Again and again, this involves far-right focus groups within the police. Apart from the cases in NRW, similar groups have been found in Mecklenburg-Western Pomerania, Hesse and Berlin and almost all other LÃ¤nder. Racist incidents are also mentioned repeatedly.

Links between the police and the ReichsbÃ¼rger (groups that reject the legitimacy of the post-war German state), types Q-Anon, the Alternative fur Deutschland (AfD) and other far-right and fascist parties, far-right and right-wing terrorist networks in the Bundeswehr wing, links with the neo-fascist group Nordkreuz as well as with the â€œHannibal Networkâ€ and the â€œUniterâ€ association of former soldiers and police officers are cited. Some of these groups are preparing for a so-called “X-Day”, maintain “enemy lists” and have organized stocks of body bags for their political opponents.

The compilation of known incidents of right-wing extremists and right-wing terrorists linked to security agencies alone shows that these are not isolated cases. Far-right groups within the NRW police force are part of a far-right network that spans all security agencies and is promoted and covered by the intelligence services.

These far-right structures are used to prepare the state to suppress the growing resistance of the working class against mass layoffs, social cuts, collective immunity policies and militarism. Workers must prepare politically and build the Sozialistische Gleichheitspartei (Socialist Equality Party).