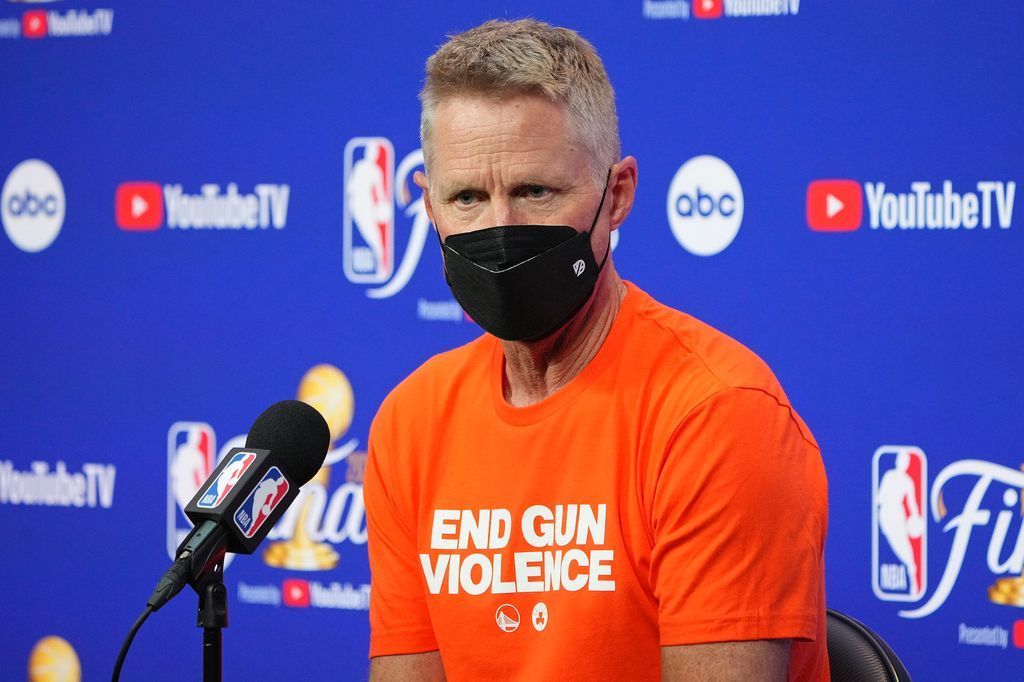 SAN FRANCISCO — Coaches and players for the Golden State Warriors and Boston Celtics wore orange shirts with the message “End Gun Violence” on the front ahead of Game 2 of the NBA Finals.

Warriors coach Steve Kerr and Celtics coach Ime Udoka both wore the shirts during their pregame press conferences on Sunday night. Kerr made an impassioned and angry plea at a pregame press conference in Dallas ahead of Game 4 of the Western Conference Finals for a change in gun laws after 19 children and two teachers were killed in a mass shooting at Robb Elementary School in Uvalde, Texas, earlier that day May 24.

“As a league, we believe it’s time people took notice,” Kerr said Sunday. “And to participate in what should be a national effort to limit the gun violence that exists. And there are ways to limit it. There are proven laws waiting to be passed, whether it is checks on background or what you have.

“There are things we can do that wouldn’t violate people’s Second Amendment rights, but that would save lives. The idea behind wearing the shirts for both teams is to make people aware that they can contribute to various gun safety and gun violence prevention groups.”

On the back of the shirts there is a message that reads “LEARN MORE” with social media handles from organizations that seek to end gun violence and support gun control legislation such as “@ bradybuzz”, “@everytown”, “@giffordscourage”, “@livefreeusa” and “@marchforourlives”.

“How much will it take? Popovitch asked. “One massacre a month? Two massacres a week? Fifteen kids? Twenty-four kids? [a shooter will] kills 74 sometimes? So maybe you will do something? Move your ass! Do something! They work for us. The majority of us want them to do something about gun laws and they don’t because they care more about their power, position and money than our kids. .”

Kerr implored people to get out and vote to try to affect change with gun laws.

“I think the most important thing is to vote,” said Kerr, whose father, Malcolm, was shot and killed in a terrorist attack in 1984 while he was president of the American University of Beirut. “What I understand is that a lot of the congressional races that are going on, despite the fact that the majority of people in this country want gun safety measures in place, a lot of those races are decided by people who are not so much for any kind of gun safety measures and so people got to vote, and if you really care about saving lives and maybe even someone in your own family , get out and vote.

“It’s the only way to convince the people we need to convince to start implementing gun safety regulation prevention laws, things we can do to help.”

Udoka also spoke out against gun violence in the Eastern Conference Finals.

“We’re playing a game where if you win, you’re happy and you feel good,” Udoka said on Sunday. “You lose, you’re devastated at the moment but it’s not life and death, you carry on. The awareness is about things that continue to happen in our communities. They’re devastated and their families are devastated and we kind of go on with our normal life and business, just keep holding those thoughts in our minds and those people have a hard time.

“It keeps happening. And awareness and changes need to be made and we’re all on the same page about that.”

Children Most Victimized by Indian State Terrorism at IIOJK