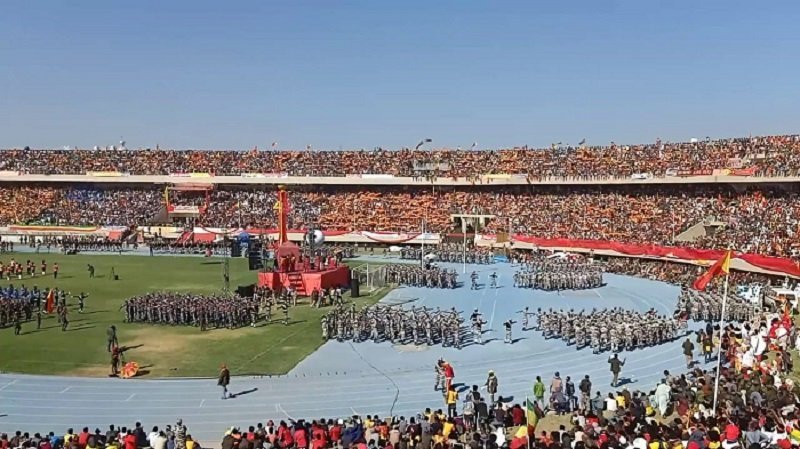 Holding the bull by the horn: TPLF is the problem

I read the Foreign Affairs article by Senator Chris Coons of December 6, 2021 titled “Peace is Still Possible in Ethiopia” with immense frustration and disappointment. From the outset, Senator Coons warns us that Ethiopia will face a Balkan-style divide if the belligerents continue on their current path, and deplores Prime Minister Abiy’s choice of war as a means to resolve this conflict. He is wrong on both points. Despite a concerted effort by foreign actors to finance and arm this or that ethnic group for their own selfish interests, Ethiopians are still united enough to ensure the security, sovereignty and territorial integrity of their nation. A prediction of a Balkan-style fracture of the Ethiopian state is a consequence of the ignorance of the Ethiopian people. Moreover, to characterize Abiy as a leader who has chosen war, even when his enemies are at the gates of his capital, instead of negotiating, is to deliberately distort the course of this war, and of course, his enemies are not not on the doorstep of his capital either – they’re over 250 km away, still running for their lives – and war wasn’t a choice for him either. His patience and efforts to resolve conflicting interests peacefully for three years before the start of the conflict were repeatedly thwarted by the terrorist group. Ethiopian mothers from all parts of Ethiopia sent their representatives and pleaded, the country’s elders judged, the nation’s religious leaders did all they could to arbitrate and the TPLF rejected them all. Abiy did not choose to go to war; he was trained in it.

What is even more heartbreaking is Senator Coons’ recognition that the TPLF started the war by attacking the ENDF’s North Division, and his exhortation to take the negotiating route, and his disappointment with his decision. to retaliate. Alas! Which country leader will negotiate with traitors who, in an unexpected conspiracy, attacked and destroyed one of his five army divisions, killing at least 6,000 soldiers? Even if he wants to negotiate, what kind of people will allow him to do it with traitors who have slaughtered 6,000 of their beautiful sons and daughters, the best in the country? Isn’t that confusing Abiy and the Ethiopian people with zombies? If it was not Ethiopia, if it was not an African country, would the senator have dared to suggest inaction in the face of such a terrorist strike? I am sure the senator expressed his condolences and solidarity with the French people when a few terrorists bombed a concert hall, a stadium and a restaurant in Paris, killing less than 150 and injuring as many on a November night. 2015, as it should be. I fail to grasp his logic that the Ethiopians are negotiating with their terrorists who massacred six thousand and injured many more, and quickly moved to MaiKadra and carried out genocide that left a thousand more dead. . What more would Ethiopia have taken to gain the sympathy of the West against its terrorist attack?

Next, Senator Coons explains how President Biden made this conflict his number one priority and made him work with Ambassador Feltman with regional partners and European allies to push the warring parties to negotiate. But nowhere do we see the push to bring the TPLF to the table. No European country or the United States itself has officially condemned the TPLF for the November 4 terrorist attack on the North Division, nor for the MaiKadra genocide of November 9 and 10. We also do not see outrage in any part of the world over the TPLF’s use of child soldiers and other war crimes. In fact, the West aided and encouraged them by using humanitarian aid as a cover. The 800 heavy WFP trucks that are used for TPLF war purposes and the satellite communication capability the West has provided them have only fueled the conflict. Each time the TPLF became more aggressive and invaded more territory, the call for dialogue died out; each time he suffered a defeat and fell on his back, the call for dialogue grew louder. Even during the unilateral ceasefire, the best window for pushing for dialogue has been squandered by the noisy silence of the international community. So pushing the two sides to negotiate is political theater. The push was one-sided and targeted the Ethiopian people and government.

The sad part is where Senator Coons lists the efforts of the United States to achieve a peaceful resolution of the conflict, and how Prime Minister Abiy promised him to seek peaceful means and failed him. Nowhere does he tell us what pressure he exerted on the terrorists and how they responded to it. Usually I hate to use clichés, but let me break my own rule once – it takes two to tango. Peace will not come, because Abiy wanted it, unless he is ready to give in to the hegemony of the TPLF in foo. Then he goes on to list US actions, such as targeted sanctions against those fueling the conflict and revoking the preferential trade access Ethiopia had, and ending the sale of arms and aid to security in Ethiopia. All of them are examples of arm twisting in a strategy of what I called blackmail diplomacy in my previous article. Sanctioning Ethiopian and Eritrean officials is futile because they have not accumulated wealth abroad. He will work against the terrorist group, because his enormous wealth that he looted from the Ethiopian public treasury which now finances his genocidal war, is in the West, in one form or another. But, the West is not yet ready to attack their heroes, the TPLF.

As for revoking Ethiopia’s preferential trade access, it is a tragic move that will not shake things up. More importantly is the sad breakdown in the historic relationship between the two countries. As to where Ethiopia will sell its products, there will be alternative markets. The same can be said about ending arms sales and security assistance to Ethiopia. President Carter did this to Ethiopia in the late 1970s to push Ethiopia to seek arms for its national defense from Russia. Will the result be different in 2021? I doubt. The other measure envisaged is the restriction of US support to Ethiopia’s financing by international financial institutions such as the International Monetary Fund. It hurts to know that such respected international institutions are at the whim of individual countries like the United States where if it favors you you get IMF support, and if not, you don’t. From the perspective of the Ethiopian people, however, I think they are much better off without the IMF than with them. The IMF and the World Bank, the US and the EU have never been the most generous during the 27-year rule of the TPLF. All Ethiopians failed in their most important and heartbreaking Ethiopian Renaissance Grand Dam project and had to build it with their own money. But, they have all given loans and grants, inherently prone to corruption, in the billions. As much money as we received was illegally transferred to the private accounts of the TPLF leaders. Therefore, the Ethiopians are still servicing these loans and TPLF is waging the war against Ethiopia using these accounts. So the loss of IMF aid may not be so dire.

To conclude, I notice a lack of will to hold the bull by the horn. The TPLF treacherously started this war in the most brutal way, slaughtering six thousand Ethiopian soldiers in 24 hours, carrying out a horrific genocide in MaiKadera, raining missiles on Asmara to internationalize the war, rejecting and ridiculing the ceasefire. one-sided fire and extended war. in Afar and Amhara, and attempted a fantastic walk in Addis. TPLF IS THE PROBLEM. Do with it.

For why not Negotiation, you can read my article on Borkena from July 29, 2021 entitled

For the United States’ misguided approach to the conflict, you can read my article from November 12, 2021 titled

“US Blackmail Strategy in Ethiopia: Adding Fuel to the Fire”.

__
To publish item on borkena, please send the quote to [email protected]