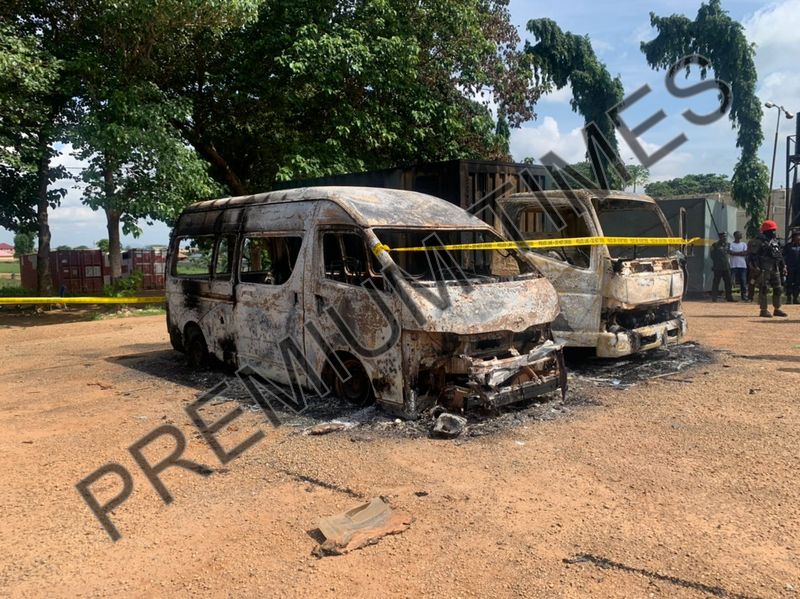 Tukur Manu, an aide to a popular Islamic cleric, Ahmad Gumi, said on Wednesday he knew about the attack on Kuje prison and had shared his intelligence with security forces, but nothing came of it. was done to avoid the attack.

Prison attackers have freed at least 64 inmates suspected of belonging to the Islamist group Boko Haram after the prison was successfully raided on Tuesday night.

Mr. Mamu helped negotiate the release of 11 hostages who were taken from the train bound for Kaduna. At least 51 of the hostages are still with the terrorist group.

Mr. Mamu, in a statement sent to PREMIUM TIMES on Wednesday evening, said that since facilitating the release of the hostages, he has repeatedly raised the alarm about the deplorable condition of the remaining hostages, calling on the government federal government to act quickly by listening to terrorists to save the lives of innocent Nigerians in captivity.

He said his life was in danger, so he withdrew from negotiations to secure the release of the remaining captives.

“This is probably the last time I will dwell on the above topic, due to the frustrations and inability of the relevant official stakeholders to make quick and painful decisions, in the interest of the citizens of a nation that has been consumed by insecurity and preventable attacks.

“With all of the billions in budgetary allocations being spent on security, with examples of a few becoming billionaires at the cost of innocent lives, we have to come to terms with the fact that the current system has collapsed.

“It is also to confirm to Nigerians that after unnecessary delays and despite the step we have taken in our efforts to secure the release of the remaining victims of the Abuja-Kaduna train attack, the kidnappers have indeed threatened again to start massacring their victims yesterday, Tuesday, July 5, 2022.

“I was crying in audio after listening to their recorded message and pleading with them. Their renewed threat is the result of our (FG)’s failure to convey to them a definitive response regarding their two demands which I consider worth approving expeditiously, especially considering the value of the innocent lives that are with them and in a country where a person will steal far more than they ask for.

“Following my engagement, they gave us the opportunity to meet their demands, but we failed to do so on four occasions, leading to the recent threat.

“To me, there is no difference between corrupt officials or contractors who commit treason against the nation by stealing resources that will benefit everyone, funds that will stop preventable deaths in our hospitals due to structures decaying, improve education standards and even stop the insecurity and crimes with the terrorists that emerged because of this sad reality and are now unleashing terror on all of society.

“It was after the failure of the fourth opportunity that they angrily made the new threat to begin slaughtering their victims yesterday, Tuesday. After pleading with them extensively, tolerating abuse and begging them to allow members of the family to contact them directly, they gave today, Wednesday, July 6, that if there was nothing specific from the family members, they would begin to carry out their threat.

“I immediately conveyed this disturbing information to all relevant security agencies, the leadership of the National Assembly and other stakeholders. But unfortunately, as of today, Wednesday, which is the deadline that they gave, no one heard from them, but I nevertheless sent them words to reconsider their threat and allow their family members to reach out to them.

“And even on the trend and threat of attacking targets and other facilities of interest like the Kuje Correctional Center attacks, I shared that intelligence with the security agencies and the committee that was constituted by General Lucky Irabo of the CDS (Chief of the Defense Staff).

“I can confirm without a doubt that the attack on Kuje Correctional Center was executed and coordinated by the same group that attacked the train bound for Abuja-Kaduna because they gave indications of imminent attacks to this effect I have shared.

“For the record, they asked for the release of 51 of their members. But through the power of dialogue and engagement, I was single-handedly able to bring that number down to just 10 and communicate via audio supporting the development to the relevant authorities.

“There has been an unnecessary delay in giving them even accurate feedback from the government and now they have not only managed to carry out another successful attack which challenges the nature of our intelligence and our ability to react quickly, but also managed to release doses from their limbs. which would have been avoided if steps had been taken to give them only 10 and secure the release of the train victims. In all this risky, painful and frustrating engagement that the government has yet to acknowledge and appreciate, I have over 100 documented audio recordings that I have shared with the relevant authorities. For the purposes of this important press release and to authenticate my claims, I will also be sharing 4 of the latest audios.

“And for the record, because after our successful mission which led to the release of the 11 victims, I have decided to completely disengage from this voluntary service to a nation that does not appreciate sacrifice because of the above reasons and many more but I have been instructed on humanitarian grounds by my Principal, Sheikh Ahmad Abubakar Mahmud Gumi to be patient and carry on.

“But with the current sad development at the highest official level of government, I am officially announcing my complete withdrawal from this service and announcing to the world that my life is also at risk. It should also be on record that if anything happens to me , it is certainly not the terrorists but within the corrupt society, we are inside.

“May Allah preserve the lives of the innocent victims of the train attack and ensure their safe release,” Mamu said.

Good journalism is very expensive. Yet only good journalism can guarantee the possibility of a good society, an accountable democracy and a transparent government.