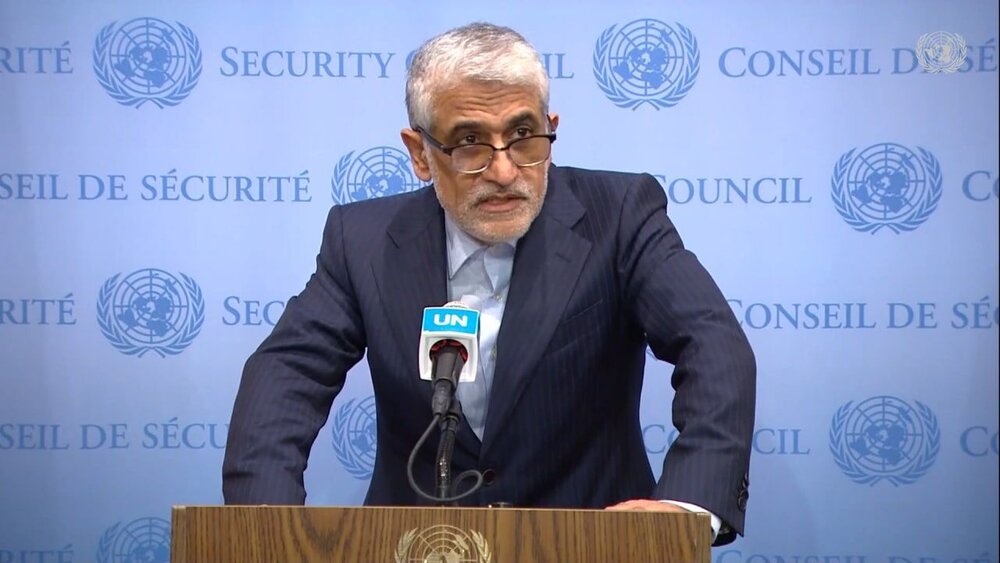 TEHRAN — Amir Saied Iravani, Iran’s ambassador to the United Nations, on Monday stressed Tehran’s support for United Nations efforts to find a peaceful solution to the war in Ukraine.

In issuing a statement on the draft UN General Assembly resolution on Ukraine, Iravani expressed Iran’s clear, consistent and unwavering position regarding the ongoing conflict in Ukraine.

“In the same vein, Iran has long upheld the Declaration on Principles of Law concerning Friendly Relations and Cooperation among States in accordance with the Charter of the United Nations and reaffirms the basic principles contained therein, emphasizing in particular that all States must refrain in their international relations from any form of military, political, economic or any other form of coercion directed against the political independence or territorial integrity of any State.

“Unfortunately, the same countries which emphasize ‘the importance of maintaining and strengthening international peace based on freedom, equality, justice and respect for human rights, and of developing friendly relations among nations , regardless of their political, economic and social systems or levels of development, ‘have been and continue to be at the forefront of the violation of these same principles elsewhere,’ he said.

The ambassador suggested that the UN should maintain “objectivity and impartiality” in order to settle the conflict in Ukraine.

“The Islamic Republic of Iran supports the continued efforts of the United Nations to find a peaceful solution to the conflict in Ukraine. The United Nations must maintain its objectivity and impartiality in order to play a responsible and constructive role in the political settlement of this conflict,” Iravani noted.

He continued: “Draft resolution A/ES-11/L.6 contains languages ​​that are not within the competence of the General Assembly, because according to Article 39 of the Charter, the General Assembly does not has no authority to determine the existence of an act of aggression. Furthermore, GA resolution 3314 of December 14, 1974, based on the same article of the Charter, asks the Security Council to find the existence of an act of aggression. We must not tolerate the misuse of the General Assembly to serve the narrow interests of a group of States by reducing the role of this august organ to a mere buffer, for that would have the effect of further undermining multilateralism and the rule of law at the international level. If accepted, the proposed mechanism would make no real contribution to the peaceful resolution of the conflict; rather, it would only serve as a political tool in the hands of a group of states.

The ambassador also expressed Tehran’s dissatisfaction with applying double standards to problems in other parts of the world, such as the conflict in Yemen or the suffering of people in Afghanistan and Syria.

“The problem here is that the main sponsors of this draft resolution, in a blatant double standard, apply different criteria in other conflicts around the world, such as Syria, Palestine, Afghanistan, Yemen, etc.” , lamented Iravani.

Iravani added: “We share this view that if an international mechanism is to be established to investigate violations of international law caused by wrongful acts of the state and assess its reparations, it should be a mechanism with a broad mandate that could deal with any cases of international wrongdoing. by any state and deal with all incidents and claims for redress, including those arising from international responsibility for military aggression, blockades, pillage, unilateral sanctions and occupations, apartheid, as well as the provision of ‘WMD, including chemical weapons, to brutal regimes like Saddam Hussein. ”

The ambassador reiterated Tehran’s fierce opposition to any mechanism that could undermine the principle of international law.

“The Islamic Republic of Iran insists on the inviolability of jurisdictional immunities of States and their property, which are generally accepted as a principle of customary international law. The Islamic Republic of Iran hereby expresses its firm objection to any mechanism that could undermine this well-established principle of international law. We would like to record that any acts or decisions that may arise from the mechanism mentioned in OP3 and OP4 of the draft resolution will have no legal status and will therefore be null and void,” the Ambassador concluded.

Iravani also issued a statement on the situation in Afghanistan, calling the US withdrawal from the war-torn country “irresponsible”.

“This year the General Assembly will consider the draft resolution on the situation in Afghanistan for the first time since the irresponsible withdrawal of foreign forces and takeover of the Taliban and the debate comes at a critical time in the current situation in Afghanistan, which now faces a number of interconnected and overlapping crises,” Iravani said, adding, “The humanitarian situation is particularly dire. Millions of people today live in poverty. Food insecurity is worsens and human rights continue to be violated, especially against women and girls, who are still denied access to education. Meanwhile, the de facto authorities have yet to fulfill their international obligations.
After the September 11 attacks, the United States invaded Afghanistan to fight terrorism and bring democracy to the country. However, after 20 years of occupation, the United States was forced to leave the country in disgrace.

The diplomat added: “The current situation in Afghanistan reminds us that military intervention in other countries under the pretext of fighting terrorism while claiming to bring democracy, peace and prosperity not only degrades these common values, but also harms those States and their people. . This catastrophic situation entails responsibilities and obligations for the foreign forces that illegally invaded and occupied Afghanistan under the guise of fighting terrorism and left nothing but havoc in their wake.

Iravani noted: “Today my delegation will vote in favor of draft resolution L.11 to send a strong message that all members will remain firmly united with the people of Afghanistan in our efforts to build a peaceful, prosperous and self-reliant country. resilient country This was the fundamental principle that guided our approach to the negotiations.

Iran’s top UN diplomat also reiterated Tehran’s long-standing policy for an inclusive government in Afghanistan to ensure the rights of all Afghans, regardless of ethnicity, gender or religion. .

“The future of Afghanistan depends primarily on the restoration of the country’s Constitution and a strong commitment to it. An inclusive government based on an established constitution is the only way to guarantee and protect the rights of all Afghans, including women and girls, as well as linguistic, racial and religious minorities. In a multi-ethnic and diverse society like that of Afghanistan, no single group, party or faction can claim power alone. The Taliban must be aware of the repeated calls by the international community for the formation of such a government that faithfully reflects the multi-ethnic society of Afghanistan. The formation of an inclusive government based on an established constitution is a prerequisite and an essential element of international recognition.