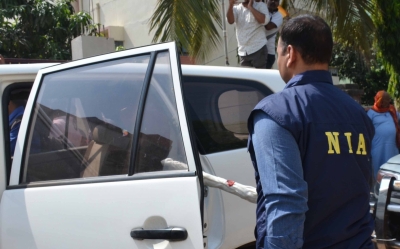 Calcutta, November 3 Detectives from the National Investigation Agency (NIA) arrested a man in the district of Parganas in southern West Bengal, who is believed to be working as a recruiter for the terrorist group Jamaat-ul-Mujahideen Bangladesh (JMB), announced on Wednesday. authorities.

The person, identified as Abdul Mannan, a resident of Bangladesh, was arrested in the Subhasgram area, about 30 km from Kolkata. He is brought to Calcutta and will be brought before a court.

According to central agency sources, Mannan was an active member of the team tasked with recruiting people and reactivating sleeper cells in West Bengal.

“The man was also responsible for coordinating with former JMB members and new JMB members,” the sources said.

Detectives also suspect that he fabricated fake ID cards for several other people.

According to the sources, Mannan’s arrest is significant because he worked as a “link” in the state and investigators believe he could be a wealth of information.

Police said the accused illegally crossed the border about a month ago and arrived here.

According to investigators, the Covid-19 lockdown and resulting unemployment make the work of these terrorist groups easier. Taking advantage of the porous border with Bangladesh and unemployment, international terrorist groups like JMB, Ansarullah Faction and even the Islamic State are trying to expand their network in the state. The aim is to make West Bengal the seat of terrorist activity throughout eastern India.

Sometimes through direct interaction and sometimes online, they target smart but jobless young boys and girls in the state.

The Kolkata Police NIA and STF obtained this information from the three JMB terrorists.

“Brainwashing deserving but unemployed youth is a problem that cannot be solved by any police or counterterrorism agency. Only local police personnel can tackle this problem to some extent. State police authorities should give special training to constable-level personnel on these lines. But unfortunately, this system is not followed in West Bengal. West Bengal police personnel are understaffed and therefore they are mainly involved in solving public order issues. Very few of them are trained or equipped to deal with the woes of sleeper cells, ”said a senior official at the state’s interior ministry.

Disclaimer: This article was posted automatically from an agency feed without any text changes and has not been reviewed by an editor