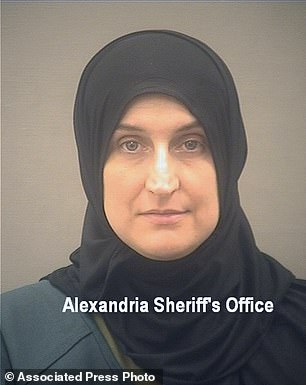 A plea hearing for “ISIS mom” Allison Fluke-Ekren, 42, of Topeka, will take place in federal court in Alexandria, Virginia. Tuesday, according to a court notation.

Prosecutors said Fluke-Ekren joined the overseas terrorist organization in 2014 and began leading his unit in 2016.

She was accused of providing ISIS and ISIS operatives with services, including accommodation, translation of speeches by ISIS leaders, training children in use of AK-47 assault rifles and suicide belts, and teaching extremist Islamic State doctrine.

She also allegedly wanted to recruit ISIS operatives to attack a university campus in the United States and referred to a terrorist attack on a shopping mall.

Prosecutors also claim she tried to ransom her own children from their father in Kansas after fleeing with them to the Middle East.

Fluke-Ekren was brought to the United States in January to face a criminal charge of materially supporting a foreign terrorist organization.

It’s unclear what specific charges she will plead guilty to, as her attorney did not immediately return an email seeking comment.

Fluke-Ekren, who once lived in Kansas, moved with her second husband, Volkan Ekren, and four children to Egypt in 2008

The affidavit also alleges Fluke-Ekren, who went by the names “Umm Mohammed al-Amriki”, “Umm Mohammed” and “Umm Jabril”, became the leader of an Islamic State unit called “Khatiba Nusaybah” in the Syrian city of Raqqa at the end of 2016.

The all-female unit made up of wives of male ISIS fighters was trained in the use of AK-47 rifles, grenades and suicide belts.

Members of Khatiba Nusaybah reportedly received instruction in physical training, medical training, lessons in driving improvised explosive devices in a vehicle, religious lessons, and how to pack and prepare a ” carrying bag” with military supplies. According to eyewitness accounts, some of these courses were taught by Fluke-Ekren.

She is also accused of providing ISIS and ISIS operatives with services including accommodation, translation of speeches by ISIS leaders, teaching extremist doctrine of the Islamic State and the training of children in the use of AK-47 assault rifles and suicide belts.

At least one witness saw one of his children – aged around 6 or 7 – holding a submachine gun in the family home in Syria, the affidavit states.

She expressed her support for planning a mass casualty attack on US soil, alleging that she wanted to recruit agents to attack a university campus in the United States

She also brought up the idea of ​​attacking a mall by remotely detonating a car full of explosives in the parking lot.

She told a witness that “she considers any attack that does not kill a large number of individuals a waste of resources,” according to an FBI affidavit.

The same witness said that when Fluke-Ekren heard of terrorist attacks in countries other than the United States, she would comment that she wanted the attack to occur on American soil instead.

In total, the affidavit cites the observations of six different witnesses, some of whom were charged with terrorism offenses and others who were held in prison camps for former members of the Islamic State.

The criminal complaint against Fluke-Ekren was filed under seal in 2019 but only made public when she was brought back to the United States to face charges.