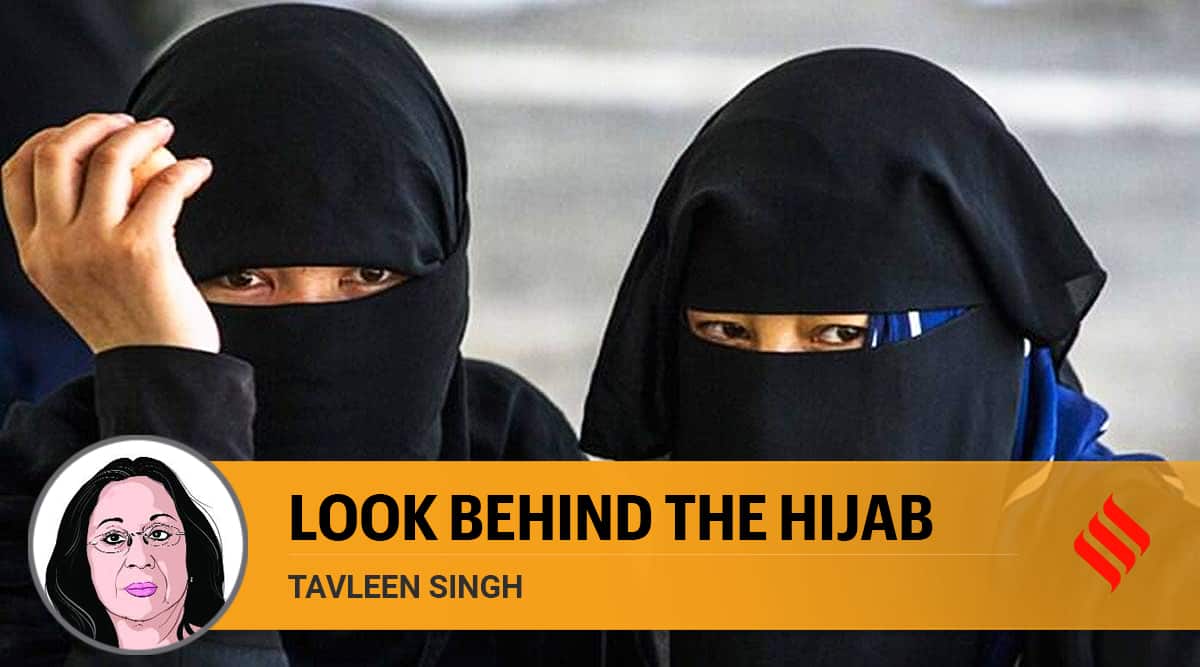 Look behind the hijab | The Indian Express

LAST WEEK, I found myself unwittingly embroiled in the hijab saga. I didn’t want to get caught up in it, but when I saw well-meaning women, especially Priyanka Gandhi, proclaiming that to wear or not to wear the hijab was a matter of choice, I felt it was necessary to point out that it was rubbish. Women raised in conservative Muslim homes are taught from an early age that veiling is an act of piety and that they should accept it without question. When this idea is taken to its logical conclusion, we get Afghanistan, Iran, and the horrible ISIS caliphate. When the Caliphate was at the height of its power and glory, women could be shot in the streets for showing their faces in public.

When the Prophet of Islam urged women to dress modestly, he may not have realized that what exactly modesty meant would be determined by men. This is what happened, and there is no point in pretending that wearing the hijab is a matter of choice. It’s not. This is why the sight of young women demanding the “right” to wear the hijab is distressing and to see powerful-voiced liberal ladies supporting them even more. Islam has given the world beautiful ideas about equality and brotherhood, but the treatment of women is not one of them. Since India is not an Islamic country, Muslim women should be encouraged to get rid of their dresses and head coverings instead of being encouraged to fight for their “right” to wear a hijab.

Once embroiled in the controversy, I began to take a closer look at what was happening in Karnataka, and the closer I looked, the more worried I became. What worried me the most was that the students who were part of the initial protest were supported by the Campus Front of India (CFI), which is the student wing of the Indian People’s Front (PFI). It is a violent jihadist organization. It has an army of jihadists who often take part in military exercises. The next is scheduled for Murshidabad next week, February 17, with the stated aim of tackling “Hindu and fascist forces”.

My own interest in the PFI started in 2010 when he ordered an attack on a teacher in Kerala, Professor TJ Joseph, and in that attack his hand was cut off by PFI fanatics. He was punished because in the eyes of the PFI he had insulted the Prophet Muhammad. The PFI embodies the kind of radical Islam that has been directly responsible for most of the jihadist terrorist attacks around the world and which gave birth to the Taliban government that rules Afghanistan today. Indian Muslims who feel increasingly alienated in Narendra Modi’s “New India” are particularly vulnerable to ideas of political Islam propagated by organizations like the PFI. Thus, it should come as no surprise if when a proper investigation into the hijab manifestation is conducted, it turns out that the PFI sponsored it. Without strong backing, it’s hard to imagine how a small group of Muslim college students were able to take their hijab claim all the way to the Supreme Court.

It is equally difficult to understand how a protest that began at a government college in Udipi was able to so quickly and easily garner support from veiled Muslim women in cities across India. Veiled protesters in different cities carried the same signs saying, “The hijab is my right.” This protest is no longer about Muslim girls who are denied access to education, but about Muslim girls who unwittingly become pawns of political forces whose ideology and ideas are the opposite of the ideas that define the India in our Constitution. What is more disturbing is that the men who control the PFI have convinced these young girls that it is the Constitution of India that gives them the right to freedom of religion and worship. It gives them that right. What it does not give is the right for forces like the PFI to spread their violent and ugly ideology unchecked.

On a personal level, I first noticed the spread of radical Islam in our southern states over 20 years ago. I was in Coimbatore to investigate the serial bombs that exploded on February 14, 1998, in which 58 people were killed and over 200 injured. I remember going to a Muslim locality around a large mosque and finding that Tamil Muslim girls who once wore sarees like their Hindu sisters now wore salwar-kurtas and walked around in elaborate hijabs. When I tried to strike up a conversation with them, they said they weren’t allowed to talk to strangers unless they got permission from the local maulvi. So I went to the mosque to look for her, but if I remember correctly either the girls were not allowed to speak or the maulvi remained elusive.

After the attacks of September 11, radical Islam spread exponentially among our Muslim communities. Before Narendra Modi became Prime Minister, they said it was a response to Islamophobia and the demolition of the Babri Masjid. Today, they say it’s a response to what the PFI videos call “Hindu and fascist forces”. What is clear is that these developments are dangerous to national security and must be investigated and stopped urgently and decisively.

US to fund media ‘strengthening’ and youth work in Syria