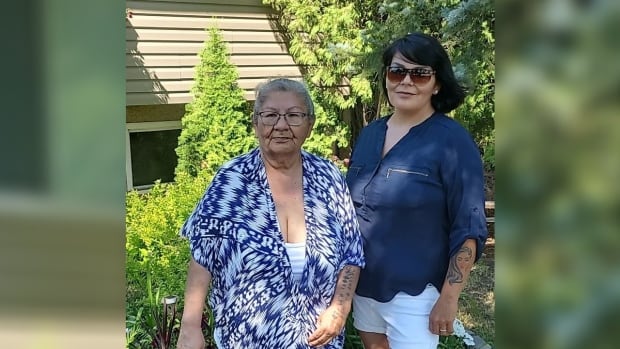 “My mother is a strong woman”: daughter from Saskatchewan. stabbed survivor recounts terror and resilience after attack

Nicole Moostoos was jolted awake by her crying daughter who rushed into her bedroom.

“She told me that my mother and Creedon had been stabbed.”

It was around 6 a.m. on September 4. Moostoos, 41, jumped up in panic, put on some clothes and headed for the door.

She has traveled the road to her mother Arlene in James Smith’s Cree Nation countless times before.

This time she ran.

“As I was running there were bodies lying on the ground.”

With tears in her eyes, Moostoos recalled walking past the house where Bonnie Goodvoice-Burns lived with her family.

The yard had become a crime scene.

The Goodvoice-Burns family said the woman died trying to protect her son Gregory, known as Jonesy, during the stabbing in the community.

A community crisis worker, Gloria Burns, was also killed trying to help them.

Moostoos said she wanted to offer CPR or some sort of assistance, but a woman at the scene said it was too late.

“They were already gone.”

Moostoos continued to his mother. A friend picked her up on the way.

She thought her mother, 65, would already be in an ambulance on the way to hospital, but when Moostoos arrived her mother and younger brother Creedon, 26, were still injured on the ground.

They were told that the paramedics could not come because the RCMP had told them to stay put.

Waiting for help at the band office

They picked up Moostoos’ bloodied mother and brother and brought them to the band’s office, which houses a health clinic.

They wanted to take the victims to the hospital, but had no choice but to wait for ambulances.

With so many injured, paramedics had to sort through and wait for directions from the RCMP. The men who police believe were responsible for the attacks remain at large.

“She asked me to lie there and pray with her.”

Moostoos said people at the band office worked hard to keep the injured calm amid the chaos.

“People kept coming and coming and telling me who was gone, and it was just unreal. Unreal,” she said.

“You wake up the next day and you think it was a bad dream and everything comes rushing back.”

Ten people were killed in the rampage in the small community where virtually everyone knows each other and nearby Weldon, Saskatchewan.

Moostoos said she is related to most of the victims, “except that old man in Weldon. God bless his soul.”

She also knew the suspects, Myles and Damien Sanderson, from when they were little boys.

Damien, 31, was found dead near one of 13 crime scenes the day after James Smith’s Cree Nation attack. Police said her injuries did not appear to be self-inflicted.

Her brother Myles, 32, was arrested following an extensive three-and-a-half-day manhunt but was pronounced dead in hospital after entering what RCMP described as a medical distress.

Moostoos said he threatened to attack one of his brothers – who worked at a local store – with a gun and hurt his family.

“He said he was going to burn the house down while we were there.”

They reported him to the police.

Documents from the Parole Board of Canada indicate that in 2017, Sanderson “got into an argument with an employee of a First Nations band store, tried to fight the victim, then threatened to murder him and to burn down his parents’ house.

“My mom was so scared,” Moostoos said.

There was some relief after Myles was arrested in 2018 and sent to prison.

But on September 4, months after disappearing from the authorities’ radar, he came looking for his family.

The brother Myles had previously threatened was not home at the time. Moostoos said his mother was sleeping when Myles came into her bedroom.

Moostoos paused, searching for words to describe the terror of that moment and the hurt his mother had suffered.

“But my mother is a strong woman. I know her heart. She will learn to forgive,” she said.

Moostoos said forgiveness is important within his family. His mother, Arlene, is a survivor of the former Muscowequan Indian Residential School.

“She won’t let this [violence] take back her house, because that’s where she has memories with my father.”

They lost her father, also a residential school survivor, in March.

Since the attacks, Moostoos has lived in Saskatoon with his mother and brother, both of whom required intensive care in hospital.

We are strong, resilient people at James Smith, and I see that every day.-Nicole Moostoos

So far, she has only returned to James Smith Cree Nation to attend funerals and wakes.

She lost her “sister”, Carol Burns, whom she admired for years, her nephew Thomas (Carol’s son), Bobby Sanderson (the father of two of her children), her cousin Earl Burns Sr., and Christian Head, known as Chicken, who was the father of his niece and nephew.

“It didn’t really hit me until I got there and had to say goodbye.”

Moostoos is grateful that her mother and brother are physically on the mend.

His mother is still in hospital, one of the last survivors still in treatment, but they hope she will be released later this week. Creedon, who protected his mother the night she was attacked in her bedroom, was released on Thursday.

“He’s quick to protect his family, that’s for sure. He’s got a big heart,” Moostoos said.

Moostoos worries about the youngest – children, cousins, nieces and nephews – who have seen loved ones mutilated.

Moostoos said the support offered in the aftermath of the tragedy – prayers, donations and help on the ground – was so important.

She said the support must continue. Community members will need the long-term help of mental health professionals, elders, police and leaders to heal.

She hopes this tragedy will force people to address other long-standing issues, many of which relate to intergenerational trauma.

“We try to be cycle breakers, because residential schools certainly hurt us.”

Although Moostoos is still visibly upset by what happened, she said she wasn’t mad at the Sanderson family.

“I feel for Myles and Damien’s family,” Moostoos said.

“I pray for them. I contacted them and told them that I was there for them and should not be blamed.”

Moostoos believes the murderous rampage was fueled in part by drugs.

She said methamphetamine is rampant and taking hold of young people.

“We have to put our foot on the drug dealers. When they are known drug traffickers, nothing is done,” she said.

“These people are related to some people who don’t want to care or just sweep it under the rug.”

But she said lingering issues such as addiction need to be addressed to prevent further trauma.

“We are strong, resilient people in James Smith, and I see him every day. I saw him at wakes, funerals, we all got together,” she said.

“But it wasn’t supposed to happen. None of this should have happened.”

Assistance is available for anyone affected. You can speak to a mental health professional through Wellness Together Canada by calling 1-866-585-0445 or texting WELLNESS to 686868 for youth or 741741 for adults. It’s free and confidential.

The Hope for Wellness Helpline offers immediate help to Indigenous peoples in Canada. Mental health counseling and crisis support is available 24 hours a day, seven days a week at 1-855-242-3310 or by online chat at www.hopeforwellness.ca.