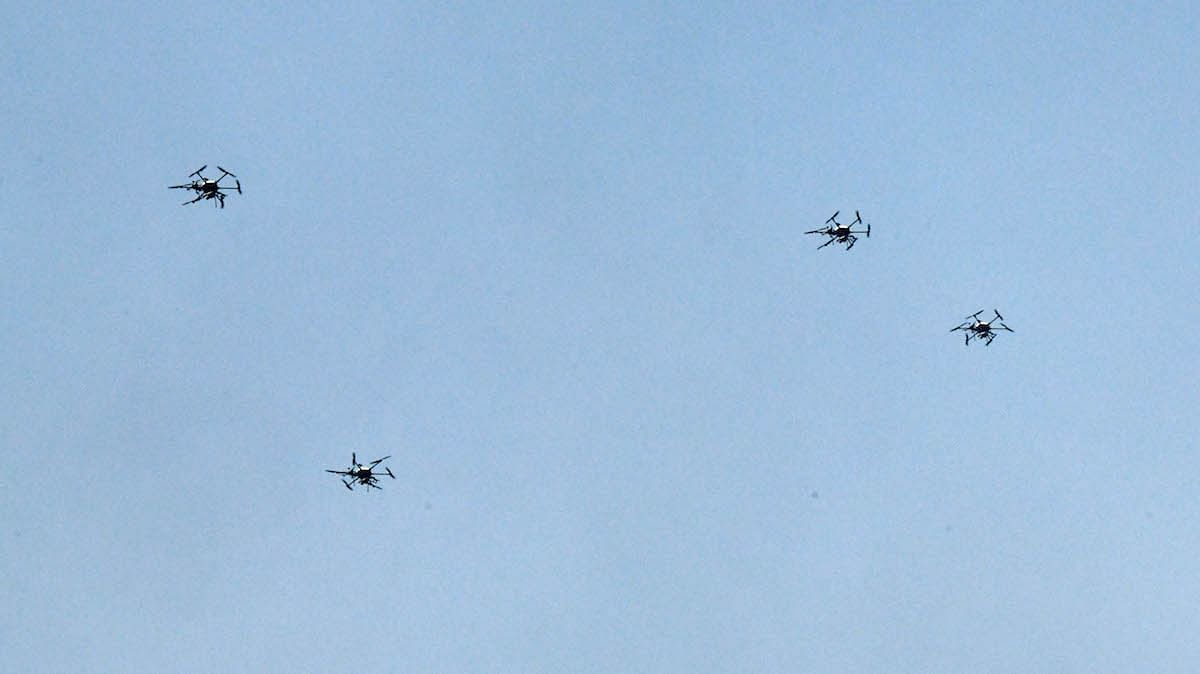 
TThe fury over the drone attack on Jammu Air Base has not yet ceased and rightly so, as it is a leap forward in “terrorist” capabilities in this subcontinent. The head of the army, General MM Naravane, called it a “clear and current threat”, which it is, in some respects. The problem is that “terrorists” in this specific part of the world are best described as “non-state actors” with a very thin line in between. Consider that the Taliban, an insurgent army waging a full-fledged war against American forces, never had drones, and you see the picture.

On our border, terrorism is a different type of warfare, with constantly evolving tactics. And the heart of the matter is that the military, anywhere, doesn’t change so quickly. They are learning however, and on a very steep curve.

The drone attack in perspective

First, don’t run around with the idea that terrorists, in general, are master tacticians or Newtons in disguise. Under pressure, they certainly innovate faster, reworking existing weapons for maximum effect. Algeria, for example, had some 685 metric tonnes of landmines and so-called â€œexplosive remnants of warâ€ (mostly ammunition left behind after years of conflict). Terrorists used it to learn how to make improvised explosive devices (improvised explosive devices) with huge effect, accounting for 48.7% of total military deaths worldwide (2011-2020).

From there to putting them in trucks and cars, it was a short but devastating step. Now the drone is the same IED that is dropped from the air.

Lazy analysis and the race to elevate the threat has led to a tendency to give Islamic State, for example, much more credit than it deserves in its drone warfare. In 2017, when at its peak, the group launched 60 to 100 drone attacks per month, injuring around 100 Iraqi soldiers. A single large explosion of IED can do a lot more damage than that. In other words, ISIS’s ability to cause damage was limited.

Don’t confuse this with the use of drones in the wars between Azerbaijan and Armenia, or with the hugely successful and equally often cited attack by the Houthis on Saudi oil facilities, which crippled production for months. . The triumphant Azeris used, among other things, the Turkish Bayraktar TB2 primed with intelligent guided munitions. In the latter case of the Houthis, success was assured thanks to military drones provided by a certain country. These are conditions close to war, not just terrorist strikes.

When it comes to the attack on Jammu, the key in both cases has been state aid. This is also at the heart of this particular type of terrorism. Drone users include Pakistan-based heroin traffickers who use short-range drones (around 2 km), Pakistan-sponsored terrorists use it to transport small arms just across the border, and Pakistan uses longer range drones for its “regular” surveillance. most recent July 2. The first requires better policing by a rather underfunded Narcotics Control Bureau. Try to get data on this in Kashmir. It is practically impossible. The second is a tactical, intelligence-driven counterterrorism effort. The third is an exclusive responsibility of the armed forces, but also physically involves the border forces. So there are three distinct types, all dangerous, but with totally different implications and agencies. This is the first point.

Read also : India must buy anti-drone systems. And we are already late

The key problem with drones is the unique advantage of â€œsmall, low and slowâ€. “Small” in terms of cross sections, so that they cannot be detected by radar, “weak” has a similar problem; and its slow speeds mean it can never be shot down by a fighter plane flying at Mach2 and above. Armed helicopters can, as the Israelis have done, but against a much larger UAV (unmanned aerial vehicle).

The problem is to know if one is ready to spend missiles costing lakhs on the thing, and that too several times a week. Any defense must therefore be affordable against a target that does not always constitute a serious threat. This is the second point.

For terrorists and state actors, the primary benefit of drones is the psychological benefit. You are eroding the sovereignty of a state in terms of airspace, and that scares the armed forces very much. After all, they are structured around the protection of sovereignty. But it should be noted that terrorists are also terrified of drones. Remember the dismay in the ranks of the Taliban when Mullah Mansour was hit inside Pakistan by an American strike. Several terrorist leaders who killed Pakistani soldiers – like Baitullah Mehsud – were also killed using drones, with obvious Pakistani complicity. Thus, it is possible to reverse the psychological advantage and turn it into a muscle attack. The question is, what psychological effect are you looking for?

The airstrikes on Balakot by the Indian Air Force sent only one message: India was changing the rules of the game from “restraint” to the offensive. On the lighter side, one could use a drone to take a picture of an army general playing golf and then release it. It is also a message. It all depends on your objective and that of the enemy. This is the third point.

Look over the horizon

Now consider this. Analysis indicates that no US soldiers were hit by an Islamic State drone during the campaign until the end of 2020. Not only that, they also had huge success in shooting down their drones. , not by luck, but by the fact that an imaginative group commander tasked a team to “look over the next hill” in asymmetric warfare in 2006, years before they set foot in action. Iraq. By the time ISIS occurred, the US group had already made great strides in drone behavior, and not only sent the data, but encouraged troops to familiarize themselves with it, allowing US forces to ” over-innovate â€the terrorists. The authors also raise an important point.

Innovation is important but will be accelerated on winged feet by adaptation to the ground. This means sharing field experiences and possible â€œsuccessesâ€ with innovation teams. It’s easy in today’s real-time information arena.

In the Indian case, where the threat emanates from various state-sponsored actors, it is a need for join in analysis and data, a point forgotten in the din of theatricalization. It is important not to just share the assets. It is also essential to share from the ground up. In this case, drone wars require sharing between border security forces, armed forces and intelligence agencies; It will truly be a combined arms effort. It also reveals a loophole that appeared to have been observed during the Galwan Valley clash last year, namely the lack of a joint assessment team. Expand that to include innovation and you’ve got a deal.

Meanwhile, shout out whatever you want about the “ever-present” threat and its severity. But don’t forget to look over the hill as well. There are imaginative people around.

The author is Distinguished Fellow at the Institute of Peace and Conflict Studies in New Delhi and former director of the National Security Council Secretariat. She tweets @kartha_tara. Opinions are personal.

But the news media are in a crisis of their own. There have been brutal layoffs and pay cuts. The best of journalism is shrinking, giving in to crass spectacle in prime time.

ThePrint has the best young reporters, columnists and editors working there. Supporting journalism of this quality requires smart, thoughtful people like you to pay the price. Whether you live in India or abroad, you can do it here.