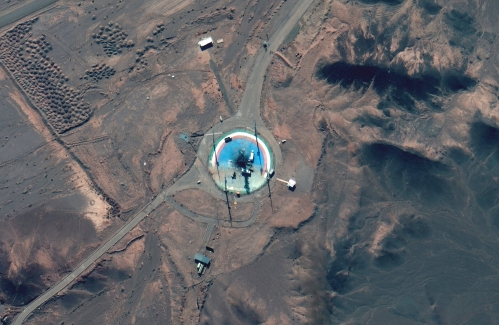 Vikram Mansharamani lives in Lincoln and is the author of “THINK FOR YOURSELF: Restoring Common Sense in an Age of Experts and Artificial Intelligence.”

While the world has rightly focused its attention on Russia’s invasion of Ukraine, another problematic development is flying under the radar in Iran.

According to many American and international officials, the The Islamic regime could soon receive tens of billions of dollars to intensify their terrorism. When combined with the Iranian government’s clandestine nuclear program, chants of “death to America” ​​and outspoken hatred of Israel, this development represents a rapidly escalating existential threat to American interests.

A little history is helpful here. In an effort to contain Iranian nuclear ambitions in 2015, President Barack Obama brokered the Joint Comprehensive Plan of Action (JCPOA), a horrific deal that fundamentally failed to solve the problem of a nuclear Iran. First, it provided Iran with a path to a nuclear bomb, albeit years late. Second, America provided sanctions relief and, who could forget, pallets of cash to the Iranian regime. Finally, the deal allowed the Islamic regime to continue its ballistic missile programs and turned a blind eye to its state support for terrorism and attacks on US soldiers in Iraq (efforts that killed more than 600 of our soldiers).

Credit should be given to the foresight of Senator Tom Cotton, who along with several dozen colleagues in the Senate realized just how bad the deal President Obama was brokering with the Iranians in 2015 was. an open letter to the iranian regime, he noted that the US Constitution requires two-thirds of the Senate to vote in favor of entering into new treaties, and failing such action, the deal would simply be a political deal between Obama and Ayatollah Khamenei. Cotton’s letter also correctly noted that many US senators would likely remain in office well beyond the 2016 US presidential election. The letter’s purpose was simple: “to prevent Iran from developing a nuclear weapon.” “.

Cotton noted that a future president could walk out of any deal “with the stroke of a pen,” something President Trump did in 2018 to more effectively tackle Iran’s funding of terrorism, hostage-taking and nuclear ambitions. Let’s not forget that Iran directly funded the Houthis in Yemen, a terrorist group that carried out drone attacks on Saudi oil installations and attacked the US embassy in Yemen, taking many employees hostage. In reality, Iran has spent more than $16 billion since 2012 on support for terrorist proxies such as Hamas and Hezbollah.

And within its own borders, Iran has an abysmal human rights record. According to Amnesty International, the regime’s security forces deploy unlawful force to crush protesters and use “enforced disappearances, torture and other ill-treatment…with impunity on a widespread and systemic basis”. In November 2019, Iranian leaders murdered about 1,500 protesters who had taken to the streets of Iran. The regime’s regular violence against women and girls and their arbitrary imprisonment and torture of political dissidents occurs alongside its brutal persecution of its nationwide LGBTQ+ community.

Iran has said it will release Americans detained under the JCPOA. Yet on the 15th anniversary of the kidnapping of a retired FBI agent and patriotic American Bob Levinson, consider Iran’s actions. Not only did they fail to free him, but it was also later revealed that Levinson most likely died in Iranian captivity. The Iranians have never revealed what happened to him or who in their government was responsible for his death. In the meantime, they’ve taken even more American hostages, hoping Biden will shell out even more cash in return. It would be a dangerous mistake. Paying ransom to terrorists in exchange for hostages will likely lead to the capture of more innocent Americans.

Let’s be clear: Iran is a direct and immediate threat to US interests. The Islamic regime has enriched uranium to a level that Rafael Grossi, Director General of the IAEA, says “has no justification for civilian purposes” and is only needed for nuclear weapons. In addition, the Department of Justice revealed this year that Iranian agents were plotting to kidnap and returned a US citizen from her home in Brooklyn.

And the regime continues to plot assassination attempts against senior US government officials – on US soil. Let’s also not forget that Iran was singing as recently as 2019 that his “technological advances” would soon make their goal of “wiping Israel off the map” achievable. It is not surprising that an Israeli Prime Minister Naftali Bennett recently warned that a renewed nuclear deal with Iran would result in a “more violent and unstable Middle East”.

Yet the Biden administration is apparently seeking to restore the JCPOA. According to various press articles and information shared by Gabriel Noronha, a former State Department official who focused on Iran, career government officials are so concerned about the concessions made in the negotiations that they leaked details of the potential deal “in the hope that Congress will act to stop the surrender”. The envisaged deal offers Iran jaw-dropping sanctions relief and a path to a nuclear bomb. You don’t need a doctorate. knowing that makes no sense.

One of the architects of the original JCPOA was John Kerry. As Kerry recently made clear, global developments may distract us so-called “existential” risks like climate change. Perhaps the Biden administration’s quest for a supposed “diplomatic victory” (and the prospect of Iranian oil to ease the pain at the American pump) distracts them from the fact that they would allow a nuclear Iran, fund groups terrorists, circumvent US laws that require Senate consent, and sell out Israel and America in the process?

We need to stop wasting time trying to restore a bad deal. As Mike Pompeo summarized, “lifting sanctions against Iranian terrorists will bring more war and more terror. This will not stop Iran’s nuclear program. A rich Iran will continue to kill all over the world, even here at home. The only death America should allow is that of this deal.