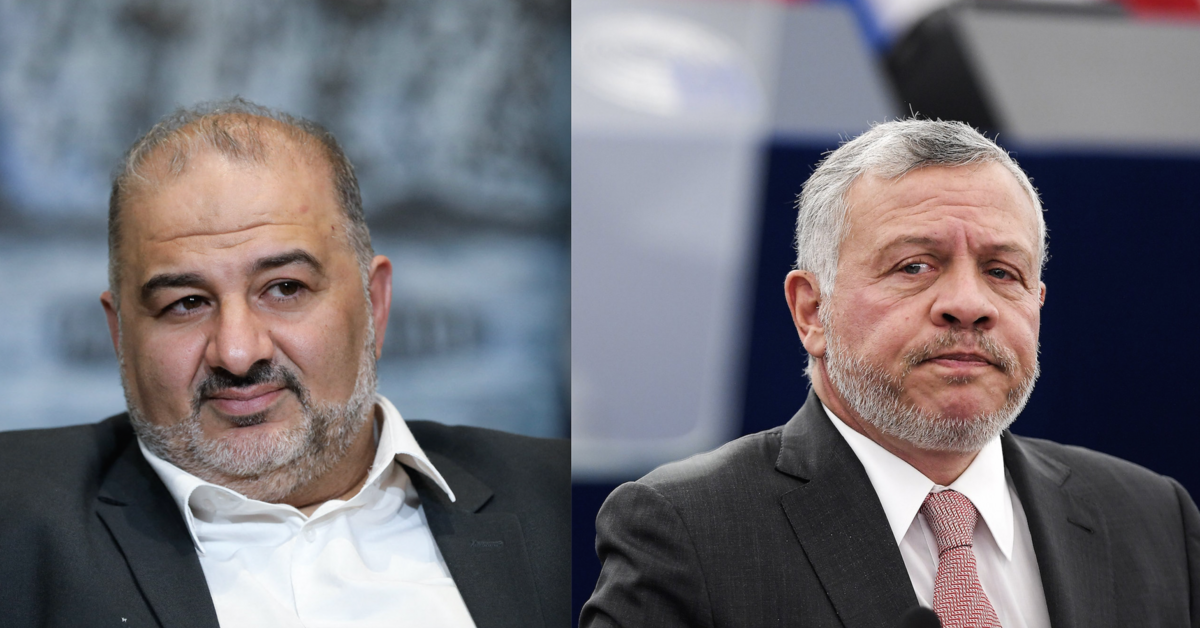 A photo of party leader Ra’am Mansour Abbas and King Abdullah of Jordan in the royal palace in Amman was the hottest point on the right-wing opposition’s Facebook and Twitter accounts yesterday. [Nov. 9].

For several weeks, the Likud party, led by Benjamin Netanyahu, has been alleging links between Abbas and Hamas. The campaign gained momentum during the budget debates, in which Ra’am secured billions of shekels for the Arab sector. Right-wing opposition claimed some of this money would be channeled to Gaza through civilian NGOs associated with the Islamic Movement in Israel. [affiliated with Ra’am], and that it would then be used to finance terrorist activities.

Following a recent investigation by Channel 13 News, Likud activists accused Ra’am of having inappropriate links with the Assistance 48 association, claiming that the association received public financial support and that part money had been transferred to Hamas. “It’s a budget with blood on its hands”, according to one of the slogans used to promote this campaign.

The campaign portrays Abbas as a wolf in sheep’s clothing. The Right argued that behind his soft-spoken message of equality was a man who did not believe in the very existence of the State of Israel. The government responded that Netanyahu himself had paved the way to bring Abbas into the coalition by personally negotiating with him to have Raam join a Likud-led government.

The campaign was aimed at destabilizing the coalition and derailing the budget, which would have brought down the government. He did not achieve this goal. By adopting the budget on November 5, the government gained some stability. It was a major disappointment for Netanyahu and Likud, who began to squat for a long stint in the opposition.

Everything changed yesterday afternoon, with the startling and almost implausible news of a historic four-hour meeting between Abbas and the Jordanian monarch at the Royal Palace in Amman.

The palace spokesperson’s office released a detailed statement and a photo of the meeting. The Jordanian press declared that “His Majesty has stressed the need to achieve a just and comprehensive peace on the basis of the two-state solution, which guarantees the establishment of an independent Palestinian state along the lines of June 4, 1967, with East Jerusalem as the capital ”.

He went on to say, “Abbas praised His Majesty’s stance on the Palestinian cause and Jordan’s efforts to preserve the status quo in Jerusalem and support the steadfastness of the people of Jerusalem.

For Netanyahu, it was a gift from heaven. He responded quickly with a tweet accusing Bennett de, “selling Israel in a ceasefire sale”. He also called Abbas “interim prime ministerAnd cited the palace statement as proof that a diplomatic process was underway, right under the noses of the Israelis.

The news was a major embarrassment for Bennett, who often points out that under the coalition agreement Abbas would focus exclusively on civil affairs. But he was clearly aware in advance of Abbas’s visit to Jordan and even approved of it, and knew that, during his stay, Abbas had had lengthy talks with the king on sensitive diplomatic matters.

According to Israeli media last night, Bennett’s office expressed outrage at the palace statement. Some reports said the palace had promised to withdraw all reports on the diplomatic talks. But this morning, the Jordanian press was covered with headlines about the historic meeting, citing the king pledging to stand alongside the Palestinian brethren to achieve peace on the basis of a two-state solution. In fact, in the afternoon of today [Nov. 10], the palace had not released any clarification regarding his initial statement.

The meeting between Mansour Abbas and King Abdullah strengthens the reputation of the king among the Palestinian population of his country, but is very damaging for Bennett, especially among the right-wing electorate. In addition, other right-wing parties in government could suffer.

This is why the opposition is not slacking off and should not slack off before the next election. He will play a leading role in the election campaigns of right-wing parties.

Here are some examples of what is already happening:

This morning the Likud Twitter account posted: “Arab media are celebrating. The Bennett-Abbas government is moving forward with the creation of a Palestinian state with East Jerusalem as its capital. This government is dangerous for Israel, so we will work to bring it down as quickly as possible. “

In an interview this morning, a Likud member in the Knesset Miki Zohar said, “If we need more proof that this government is led by the Islamic Movement, working on behalf of Palestinian aspirations, we just got it. This government poses a threat to the security of Israel.

Knesset member Itamar Ben Gvir, a former partner of far-right Bennett and Ayelet Shaked, reacted with a sarcastic tweet: “Mansour Abbas, who was sent by Bennett to represent us in Jordan, argues that Jews should only pray at the Western Wall, because the Temple Mount is theirs. With representatives like that, who needs enemies?

So far Bennett and the right-wing members of his cabinet have not responded to these attacks. There is no doubt that the meeting at the palace sends the message that they are not setting the tone for the government. Bennett himself is seen by the Right as doing whatever Abbas wants. Above all, the right-wing coalition factions are embarrassed. Not so long ago, some of them tried to disqualify Abbas from running for the Knesset because, as they claimed, he supported terrorism.

In fact, shortly after the meeting, the opposition began to search the archives for statements by these right-wing ministers attacking members of the Ra’am Knesset and in particular Abbas. For example, Minister of Religious Affairs Matan Kahana, of Bennett’s own party, attacked Likud for abstaining in a vote to disqualify Ra’am. In February 2021, before his party came to power, he called abstention a “moral low point”. He then ridiculed Netanyahu, saying, “Ra’am’s new friends of Netanyahu have visited the families of the terrorists and expressed their support for them. … There is no place for these people in the Israeli Knesset.

This text and other similar texts are now quoted on right-wing social networks. The main beneficiaries are Abbas, who has just improved his political position in both Israel and the Arab states, and the right wing, which had a problem undermining the government entrusted to them.