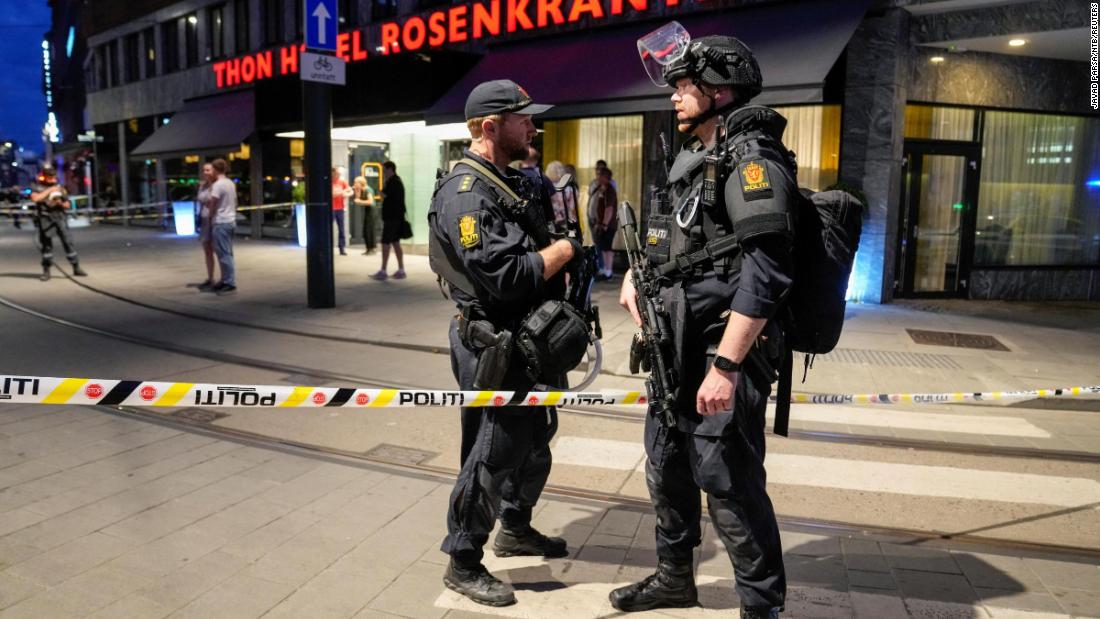 Two people were killed and eight others taken to hospital after the shooting near the London Pub, which describes itself on its website as ‘Oslo’s biggest gay and lesbian venue’.

Police received multiple calls about the shooting at 1:14 a.m. local time and arrived on the scene minutes later. They apprehended the suspect three minutes after he arrived, police said.

The suspect, charged with terrorism, is a Norwegian citizen originally from Iran, and was “known to the police”, but has so far only received “minor convictions”, prosecutor Christian Hatlo told reporters on Saturday. in Oslo.

Norway’s domestic intelligence service said it was working to clarify whether further acts of violence could be planned after the shooting. The Norwegian Police Security Service (PST) announced in a tweet on Saturday that it was “notified of the shooting in Oslo on Saturday”.

“We are now providing all relevant information we have to the Oslo Police District and are working to clarify whether further acts of violence may be planned. We currently have no indication of this,” the PST said.

He said the terrorism charge was justified based on the number of injuries and deaths, the number of crime scenes and an “overall assessment” that the accused intended to “create a serious fear in the population”.

At the time of the news conference, police had attempted to interview the suspect but had yet to do so, Hatlo said. The suspect was taken to the police station and police told CNN there are currently no other suspects.

Regarding the charges, Hatlo said authorities would see “what the investigation will show.”

The suspect was armed with two weapons during the shooting, police said. They have not confirmed what weapons he used due to the ongoing investigation.

There were injuries on the ground inside and outside the bar when the police arrived. “The scene was chaotic, it was a hot evening and a lot of people were outside so there were people running around,” police told CNN.

Among the eight hospitalized, three people are in critical condition. 14 other victims were slightly injured.

In a statement posted on Facebook after the shooting, the London Pub condemned the incident as “absolutely awful and pure evil”. The bar said all of its employees were safe and expressed condolences to the victims and their families.

Oslo’s annual Pride Parade, which was due to take place on Saturday, was canceled following the shooting after “clear advice and recommendations from the police”.
Write on Facebookorganizers asked everyone not to attend and said all Pride-related events were also canceled.

“We will follow police recommendations and take care of each other. Warm thoughts and love go out to the loved ones, the injured and others affected,” Oslo Pride leader Inger Kristin Haugsevje said. and leader of the Association for Gender and Sexual Diversity, Inge Alexander Gjestvang, in a joint statement.

“We will soon be proud and visible again, but today we will be hosting and sharing Pride celebrations from home.”

“On this day, June 25, we were to celebrate love, we were to fill the streets with the colors of the rainbow, we were to showcase our community and our freedom. Instead, we We are filled with sorrow,” he said. “Let there be no doubt. We are a community, we are a diverse and strong community, and we will never be threatened or give up on our values.

He reiterated that the author belonged “to an Islamist background” but stressed that “if it is about Islamic terror, like the PST [the Norwegian Police Security Service] emphasizes, then many Muslims will feel vulnerable now and in the times to come. And I know that many Muslims in our country are also scared and desperate. It is our joint responsibility to make it clear that no one other than the person or persons behind the attack is responsible for it.”

The White House said it was shocked by the killings. “We are all horrified by the mass shooting in Oslo today, targeting the LGBTQI+ community there. And our home, our hearts obviously go out to all the families of the victims, the people of Norway, who are a tremendous ally,” said John Kirby. , the NSC’s coordinator for strategic communications, told reporters aboard Air Force One as President Biden flew to Europe.

He said the United States had been in contact with the Norwegian government to offer their condolences and offer any support they needed following the shooting.