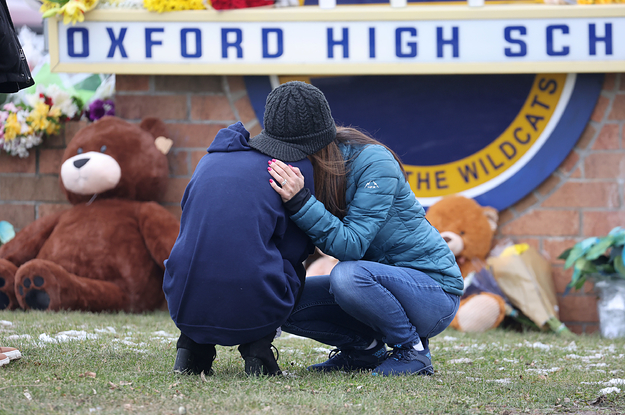 An Oxford High School security guard reportedly thought the November 2021 fatal shooting was an active shooter exercise, telling investigators she assumed a bloodied victim she passed was “very well made up”.

Kimberly Potts, a retired law enforcement officer who was employed by Oxford Community Schools as an armed security guard at the time, also allegedly opened the door to a bathroom in which were two students and the suspect, reportedly closed the door and walked away. One of the hidden students was later shot in that bathroom and died the next day.

These new allegations were revealed on Wednesday by the families of the victims and their lawyer, Ven Johnson. The families are now seeking to include Potts as a defendant in their civil lawsuit over the Michigan school shooting that killed four students and injured several others.

The families were unaware of Potts’ involvement until Johnson recently reviewed surveillance video of the shooting at the district attorney’s office, the attorney said at a press conference Wednesday. The video has not been shared with the public as it is subject to a court protective order.

In the video, Potts is seen walking “casually” down the hallway during filming. She then told investigators she assumed it was an ALICE exercise, a lockdown training to prepare students for an active shooter, according to the filing.

Potts then encountered one of the victims, 16-year-old Tate Myre, bleeding on the ground after being shot. She told investigators she thought he had “really good makeup” as part of Exercise ALICE, according to the filing.

The video also shows Potts looking into the bathroom where Justin Shilling, Keegan Gregory and alleged shooter Ethan Crumbley were, according to the families. Potts told investigators she did not enter the bathroom, where Shilling was later killed, because she did not see or hear anything.

“Ms. Potts clearly had the opportunity to intervene and prevent Justin’s death,” the filing reads.

“I feel like it’s kind of like a badly written movie or some kind of candid TV show. And I’m looking for cameras, but I can’t find them,” said Craig Shilling, the father of Justin Shilling, to reporters on Wednesday, as he got emotional. “It’s hard to know he could still be there if someone was doing his job.”

Potts is no longer with the school district. On LinkedIn, she listed her employment as a student monitor at Oxford High School from January 2020 to June 2022. She did not immediately respond to a request for comment.

The 15-year-old suspect has been charged with murder and terrorism, among other counts. His parents, James and Jennifer Crumbley, who bought him the gun he allegedly used in the shooting, also face manslaughter charges – an extraordinary charge that the prosecutor said was intended to hold them for responsible as gun owners.

The school district is facing multiple lawsuits from the families of the students. This civil lawsuit, filed in the State of Michigan, already names several employees of Oxford High, Oxford Community Schools and the Crumbleys as defendants.

Johnson said this was the fourth time they had filed a motion to change the lawsuit and criticized the school district’s lack of cooperation and transparency.

“We keep discovering new things, like every day – because of the lack of transparency, especially from the community schools in Oxford. They should have told these people and their constituents what happened,” he said. he declared. “They said nothing and they continue [to] Do not say anything.”