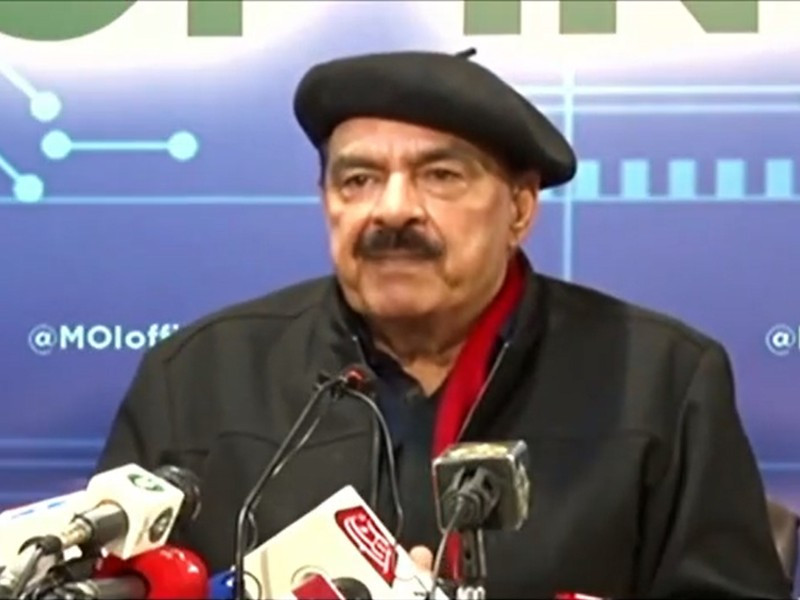 Interior Minister Sheikh Rashid acknowledged an upsurge in terror attacks in Pakistan on Saturday, saying smaller groups had become active and were attacking in different parts of the country “after the Taliban’s success” against the intelligence agency Indian Research and Analysis Wing (RAW) and 42 foreign forces in Afghanistan.

Through a notification, the Ministry of Home Affairs ordered provincial governments and law enforcement agencies to remain vigilant and exercise extreme vigilance regarding the recent terrorist attack at Anarkali Bazaar in Lahore and threats posed by “anti-state elements”.

Addressing a press conference in the federal capital, the interior minister said the current wave of terrorism has increased by around 35% to 38% since August 15 – when Taliban fighters entered Kabul last year – which is why the ministry issued a notification ordering relevant authorities to exercise extreme vigilance.

A senior Interior Ministry official directly linked the rise in terror attacks to the fall of Kabul in August 2021.

He said the 38% increase in terrorist incidents has been seen since the Taliban took control of Afghanistan after the US withdrew after nearly two decades.

However, Rashid linked the increase in terrorist attacks since last August to smaller groups that had recently merged and attacked in different cities.

The minister mentioned that two terrorists from the banned group Tehreek-e-Taliban Pakistan (TTP) were shot dead in the capital on January 18, adding that the authorities had also tracked down six of their accomplices.

Following the terror attacks, he said the Home Office had issued a warning to the armed forces, civil forces, police chiefs and chief secretaries with orders to “stay awake”.

Responding to a question, the minister said talks between the government and the TTP – facilitated by the Afghan Taliban – had failed because the group had set unacceptable conditions.

“The Afghan Taliban had facilitated talks with some TTP groups, but their conditions and demands were harsh and unacceptable,” he added.

Announcing that the doors were always open for the TTP if they were willing to accept the law and the country’s Constitution, Rashid said that if they chose to fight, they would receive an “equal response”.

He recalled that the environment in Afghanistan was no longer hostile to Pakistan since the Afghan Taliban had formed the government there.

After the defeat of the Afghan intelligence agency National Directorate of Security (NDS) and RAW as well as 42 foreign forces by the Afghan Taliban, he argued, some small groups were busy attacking and sowing terror in Pakistan, but they would not succeed.

“However, the Pak-China friendship stands against such tactics.”

During the press conference, Rashid reiterated his earlier predictions that Prime Minister Imran Khan would have completed five years and blasted opposition parties for trying to oust him from day one.

“Imran Khan is going nowhere,” the minister announced as the PPP and the Pakistan Democratic Party (PDM) – an alliance of different opposition parties – called for anti-government protests.

“Those who want to overthrow him [Imran] should now open their eyes. The Almighty help Imran Khan,” he added.

Afterwards, he urged the PDM to change the date of its long march to Islamabad — March 23 — as the roads would be closed due to the presence of the leaders of the Organization of Islamic Cooperation (IOC) in the annual parade.

He suggested that the PDM hold his march on March 24 or 27 or with the PPP on February 27, but warned that action would be taken for breaking the laws.

While warning the opposition parties, he also provoked them to table a motion of censure.

He claimed that the 25-member opposition parties would be short if a no-confidence motion was proposed.

He recalled that 15 members of the opposition parties were absent during the vote count on the finance bill.

The minister said no discussion had taken place so far on imposing the emergency or introducing the presidential system in the federal cabinet.

On the Lahore blast investigation, Rashid said there will be a breakthrough soon.

According to a report by the Pakistan Institute for Conflict and Security Studies (PICSS), the country has seen a 56% increase in militant attacks in the year 2021 despite a ceasefire of a month by the TTP after a steady decline in militant attacks for six years. year.

PICSS statistics show that militants carried out 294 attacks in 2021 in which 395 people were killed, including 186 civilians and 192 members of the security forces.

At least 629 people were injured, including 400 civilians and 217 members of the security forces.