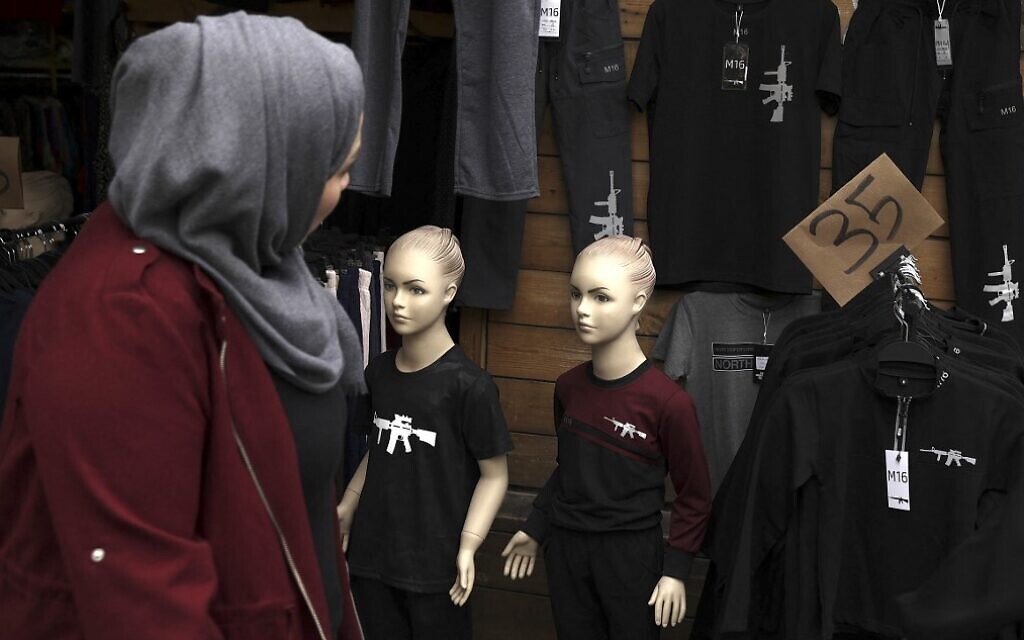 RAMALLAH, West Bank – Recent deadly attacks by Palestinians have shown a shift in the dynamic of terrorism in the West Bank, as armed factions play less of a role and individual grievances trump ideology, analysts say.

In a bustling market in the Palestinian political headquarters of Ramallah, shoppers are clamoring to get their hands on the latest hot trend.

This season it’s T-shirts printed with an M-16 rifle.

“The demand is terrifying,” he said.

“These are recent conditions in Palestine, particularly in Jenin,” a terrorist hotbed in the northern West Bank that has seen a wave of arrests by the Israeli military, the 40-year-old said.

It was with an M-16 rifle that gunman Diaa Hamarsheh ransacked the ultra-Orthodox suburb of Bnei Brak in Tel Aviv late last month, killing five people. It is one of four terrorist attacks perpetrated by Palestinians and Israeli Arabs since the end of March that have killed 14 people.

During the same period, a total of 23 Palestinians were killed in the West Bank, many of them while attempting to carry out attacks.

“Today there is a new post-faction generation, and they are the ones who are taking the lead,” he said.

“Factions are no longer a revolutionary model, and today’s operations are driven by revenge – revenge for a father, brother or friend, or revenge for any Palestinian who has been kill.”

Harb and others have also pointed to social and economic grievances as motivating factors.

Three main terrorist groups are present in the West Bank: the armed wing of Fatah, the Al-Aqsa Martyrs Brigade, the ruling Hamas in Gaza and the Palestinian Islamic Jihad, a group closely linked to Iran.

Hamas and Islamic Jihad carried out a series of bombings throughout the 1990s, and all three groups claimed responsibility for terrorist attacks during the second intifada between 2000 and 2005.

But in recent attacks in Bnei Brak and elsewhere in central Israel, observers say there is little evidence of factional involvement.

Young Palestinians “are tired of slow dancing, ideologies and high politics,” Milshtein said. “They really want to express themselves, they want to promote individual effort, they find a way to do that by committing these attacks.”

A senior Palestinian security official, who asked not to be identified, confirmed that the recent attacks were “one-man operations”.

But, he said, Palestinian parties and factions “are trying to exploit these operations for their own benefit”.

Bader al-Araj, a sociology professor at Birzeit University near Ramallah, said the style of attacks “has changed, and it’s clear that individualism is what drives”.

Araj wrote his doctoral thesis on Palestinian suicide bombings in Israel between 2000 and 2005.

He said that today’s terrorism is driven by “social conditions, such as unemployment, lack of hope, frustration, religious motives – therefore their frequency increases during the month of Ramadan”.

The Muslim holy month often sees a rise in tensions around the Temple Mount compound in Jerusalem, which in turn fuels escalations elsewhere. A series of incidents in Jerusalem during Ramadan last year sparked an 11-day war between Israel and Palestinian factions in Gaza after Hamas fired rockets into the city.

Palestinians chant slogans and wave Hamas flags during a protest against Israel, outside the Dome of the Rock shrine in the Aqsa Mosque compound atop the Temple Mount in Jerusalem’s Old City on April 15 2022. (AP Photo/Mahmoud Illean)

Milshtein said the changing dynamics pose a new challenge for Israel, as it is “very difficult” to detect individual attack plans, “unlike organized institutions or organized cells.”

“You need much more complex or qualified intelligence – but you’re only dealing with the mosquitoes, not the whole swamp.

“If you want to fix the basic problem…you have to promote efforts to improve the situation of the younger generation in the West Bank.

“I’m not saying that the roots of terrorist attacks are only social or economic,” he said. “But if you improve this situation, you may be able to limit the motivations and the number of young Palestinians who want to promote such attacks.”

Times of Israel staff contributed to this report.

The NIA has broken the back of terrorist financing!