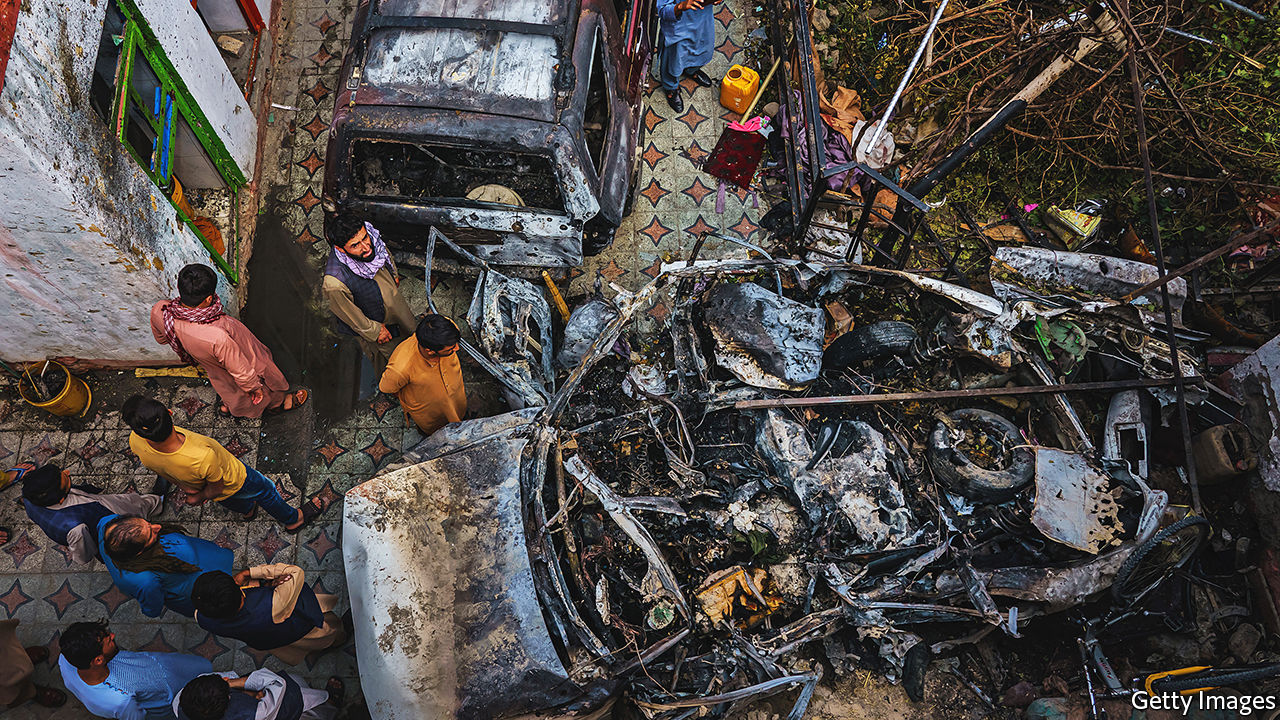 DRONES WERE a sight running in the skies over Afghanistan, but one had seldom laid eyes on the capital, Kabul. On August 29, as America was hastily withdrawing its last Afghan soldiers and refugees through the city’s airport, a drone struck a white Toyota Corolla. After the strike, General Mark Milley, the top US military official, called it a “fair” strike, and the Pentagon claimed it had foiled an impending attack on US forces. In fact, no terrorists had been killed and seven of the ten victims were children. President Joe Biden has broken with his former boss, Barack Obama, by withdrawing troops from Afghanistan. Like Mr. Obama, he now has to choose how much to use drones to replace soldiers and pilots.

Mr. Biden pledged to carry out counterterrorism operations “on the horizon”, using primarily armed drones, in Afghanistan, to pursue terrorists while reducing the toll of the war on terror for Americans. Yet, as the experience of Mr. Obama and his successor, Donald Trump, suggests, drone strikes have hardly been a strategic success. As Samuel Moyn of Yale University argues in his recently published book â€œHumane,â€ such attempts to make the war less deadly may have made its end more difficult. Mr. Biden’s strategy appears to be nothing more than a formula for a more enduring, but no less brutal, war on terrorism.

As troop losses increased and public opinion turned under President George W. Bush, drones emerged as a means of long-range combat. Deployed for the first time just a few weeks after September 11, it was Mr. Obama who significantly extended their use. The rationale was clear. America would no longer rely on vulnerable ground forces. Drones could strike as far away as Pakistan, Libya, Yemen and Somalia, places where America was not officially at war. Killing terrorists, rather than grabbing them in combat, could also solve the Guantanamo problem. â€œIf no one was captured, no one could be mistreated,â€ writes Moyn.

Eager to withdraw troops from Iraq and possibly Afghanistan, Mr. Obama led more drone strikes in his first year than Mr. Bush had done during his entire presidency. A brief prepared in March 2009 by the Ministry of Justice exposed the administration’s distorted legal justification. He said the war on terror was operating on a global battlefield. Nor would it be confined to al-Qaeda and “associated forces”: even those with tenuous ties like al-Shabab in Somalia, were fair game. Mr. Moyn argues that this made it possible to strike targets that did not represent an “imminent” threat, as required by international law. At the height of Mr. Obama’s drone campaign in 2010, the US military launched 128 strikes in Pakistan alone.

Despite Mr. Obama’s insistence that drones could specifically target America’s enemies, the increasing volume of strikes has also resulted in increased civilian casualties. With as many as 560 civilian deaths in Pakistan alone from 2009 to 2011, the UN and civil society called for reform. Guidelines issued by the White House in 2013 attempted to limit the lethality of the drone campaign beyond Afghanistan and Iraq. The document promised that strikes would not take place without “virtual certainty” that non-terrorists would not be killed.

It made it possible to stem the worst excesses: in 2016, strikes killed less than ten civilians in Pakistan, Somalia and Yemen combined. On the battlefield in Afghanistan, Iraq and, after 2014, Syria, military lawyers advised commanders on targeting decisions – beyond a certain threshold of expected civilian casualties, a strike would require authorization higher authorities. Mr. Obama expressed the hope that this â€œlegal architectureâ€ could guarantee â€œthe control of any presidentâ€.

President Donald Trump easily rejected Mr. Obama’s rules during his first year in office, giving commanders greater flexibility in choosing their targets. The pace of operations has accelerated and their reach has expanded to new locations such as Niger. Nowhere has this escalation been more dramatic than in Afghanistan, where up to 130 civilians perished in strikes in 2017. However, their effectiveness is open to debate. In the two decades since 2001, estimates the Center for Strategic and International Studies in Washington, CC, the number of Sunni Islamist militants quadrupled, but luckily they did not succeed in a devastating attack on American soil. “The assumption that there was no substitutability was wrong,” says Sarah Kreps of Cornell University, with new terrorist leaders replacing the dead.

Mr Biden has sought to contain the excesses of his predecessor and return to a more sober policy. As his administration prepares new directions, Biden has asked the Pentagon and CIA seek White House approval for strikes outside Afghanistan, Iraq and Syria. But Mr. Biden has no plans to end their use. He boasts that even without a presence in Afghanistan, his administration will continue to strike at terrorist organizations in Afghanistan from the safety of US ships at sea and bases in the Middle East.

Such a strategy may not prove to be efficient or humane. As General Kenneth “Frank” McKenzie, the top US military official in the Middle East and Central Asia, admitted to Congress on September 28, long-range drone attacks necessarily rely on weaker intelligence without nearby bases and local partner forces. Other errors, such as the August 29 strike in Kabul, are therefore likely even after the Pentagon finishes its investigation. Ms. Kreps isn’t sure Americans will take much interest in drones. â€œOnce the dust settles, we will continue to use them. “â–