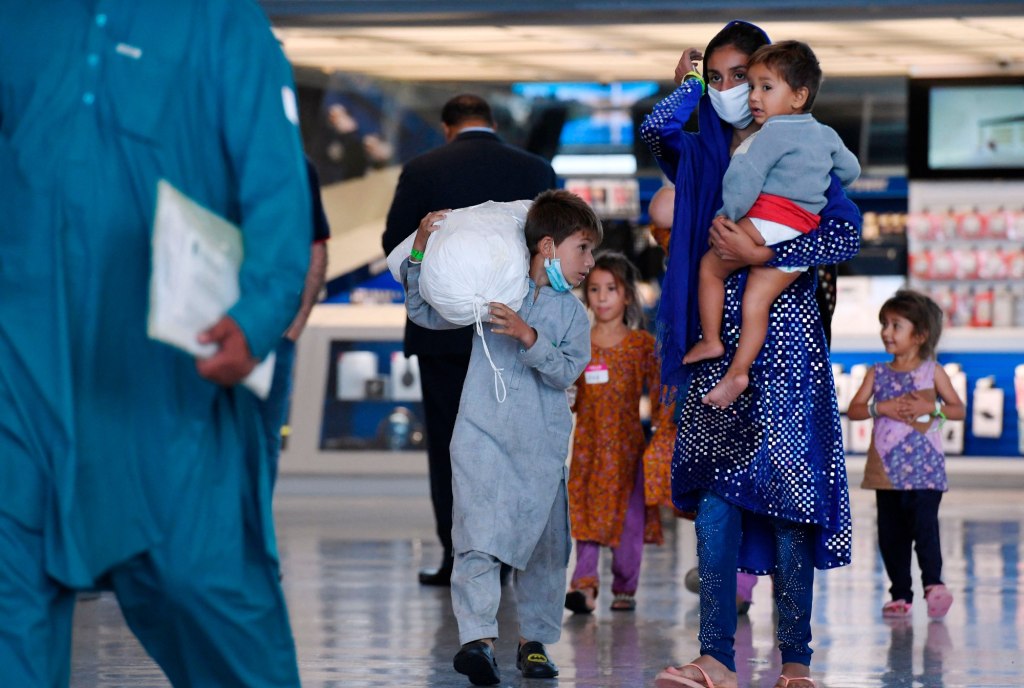 I remember the day in 2016 when a terrorist attack killed many of my fellow students and faculty at the American University of Afghanistan. I was unharmed during the 10 hour siege, but from then on I decided I couldn’t risk going to school in person anymore because of my young daughter. I needed to be alive for her. I was a member of the Afghan national football team and a strong advocate for women’s rights. My husband had spent six years working for the United States government as a NATO videographer and video editor. For the Taliban, we were enemies.

Today, I am a 27-year-old mother of two living in a quiet suburb of California. My family was lucky. We applied for asylum in 2017 and moved to the United States two years later. We obtained Special Immigrant Visas (SIV), along with a work permit and the ability to apply for permanent residency. I quickly landed a job as a bank teller at Citibank. My husband continued to shoot and edit videos as a freelancer in the Bay Area. It was our life when Kabul fell to the Taliban last August.

But when the Americans began evacuating Afghan allies, they only provided 34,500 SIV visas. Most of the other 76,000 Afghans who flew on US-chartered planes were granted humanitarian parole. This is a temporary status that lasts only two years and offers no path to permanent residency.

Parolees can try to adjust their legal status, but the process is long and expensive. There is no guarantee of success. What will happen to all these people when their parole expires? Where will they go?

As a Northern California refugee organizer for the Coalition for Humane Immigrant Rights (CHIRLA), I know dozens of allies who applied for humanitarian parole and SIV status for their families more than six months ago. and still waiting. Many live in growing poverty and danger. The Taliban banned women from working, which reduced household incomes. Worse, women can’t go to school and can’t leave their homes without a man. Domestic violence is high, as are reports of horrific beatings.

Right now the priority is getting people out of the country. And if humanitarian parole is the fastest way to get there, we need to speed up the process. But we need a long-term plan: a better way to help parolees transition to permanent status in America, like creating additional special immigrant visas or some other option. Thousands of Afghans risked their lives for America. Thousands of women have been left behind and they deserve access to basic human rights. They deserve long-term security and a future in this country if they want it.

No one should be able to stop girls from going to school. I want to ask all women leaders around the world to stand with women in Afghanistan and protect their lives. We need international support. It’s not just my own fight, and I’m not alone. There are thousands of silent voices beside me.

I was just a girl when I realized what it meant to be a woman in Afghanistan. I had to fight to go to school; my mother was a journalist and believed in me, but other family members thought girls should be married young. Sometimes angry men would throw acid at girls going to class in the morning. Although I dreamed of becoming the next Messi or Maradona, I also had to fight to play football. I started playing at school. When I was selected to join the Afghanistan women’s national football team in 2007, it was the best feeling of my life.

Before 2010, there were few women’s football clubs across the country, but around 2011, as the culture became less restrictive, they grew. The Afghan Football Federation has established women’s football clubs in many provinces. My team was training on the US Army helicopter landing pads behind the US Embassy. It was one of the safest places in Kabul, but I still hid my football uniform while traveling between practice and home. Our team faced bomb threats. Yet we continued to play.

After graduating from high school in 2010, I enrolled at the American University of Afghanistan. Following the terrorist attacks, I completed my bachelor’s degree in general management with a specialization in international relations. I have also worked as a program coordinator for the Ministry of Women’s Affairs in Kabul and as a leadership program analyst at the country’s National Security Council.

After the events of last August, Upwardly Global helped me (and hundreds of other Afghans) find professional employment. I joined CHIRLA to help incoming evacuees and started helping Upwardly Global connect newcomers to professional development. We raised thousands of dollars for women in Afghanistan. We are also building an online coalition of Afghan women and their supporters. Through media coverage and newsletters, we try to tell Afghan women that they are not alone. We have not forgotten you, the thousands of silent wives, mothers and daughters.

I understand that we cannot evacuate an entire country, but we must do everything for the women who remain. When the Taliban stopped girls’ education, I felt deep disappointment that few women world leaders spoke out. Likewise, the United States must do more for women’s rights in the country, and support the NGOs and young women who are their leaders.

Women must be able to speak on behalf of their country and participate in decision-making processes. Nor can we leave thousands of Afghan evacuees in limbo. Today I have my green card and will be eligible for US citizenship in 2024. My fellow Afghans now on US soil deserve the same path.

Kawser Amine is the Northern California refugee coordinator for the Coalition for Humane Immigrant Rights and immigrated to the United States from Afghanistan in 2019.