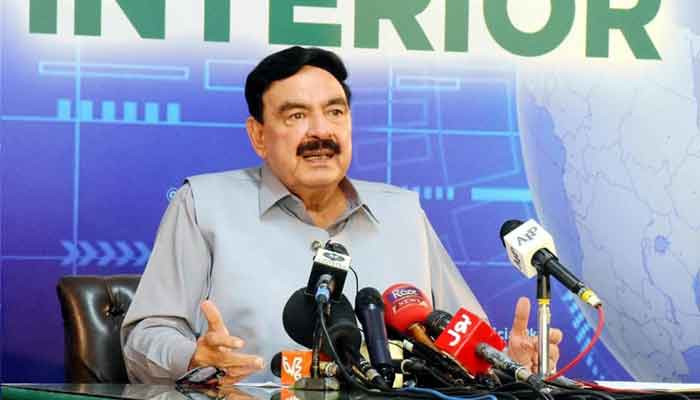 ISLAMABAD: Interior Minister Sheikh Rasheed said on Saturday that “small remnants of groups” defeated by the Taliban want to create an “atmosphere of terror” in Pakistan.

“The small groups remaining after the defeat of the Taliban against the NDS, the RAW and 42 international forces which were fighting in Afghanistan want to create an atmosphere of terror in Pakistan,” the interior minister said at a press briefing.

Rasheed said his ministry has put the Armed Forces and Inspectors General of Police on high alert due to increasing cases of terrorism in Pakistan.

According to a notification issued by the Home Office earlier today, law enforcement agencies (LEAs) have been urged to exercise “extreme vigilance” following recent terrorist incidents in the country.

The minister said no discussions had taken place with Daesh, adding that the Baloch Nationalist Army (BNA) is a “small group”.

He recalled that on January 18, two terrorists were killed in Islamabad in a shooting attack on Islamabad police, which the Tehreek-e-Taliban Pakistan later claimed responsibility for.

“We found our way to six members of the banned team after the terrorists were killed in Islamabad,” he said, adding that he did not know whether or not the BNA claimed responsibility for the incident. Lahore Incident.

Responding to rumors about the imposition of a presidential system and state of emergency in Pakistan, he said: “There is a lot of noise around the imposition of a state of emergency and the system presidential election, and I have also heard of a resolution presented to Parliament, but the cabinet I am part of has not seen any such proposal so far.”

“We are ready to combat terrorism and are already investigating a suspect for his alleged involvement in the Lahore blast,” Rasheed said.

He said that as long as he is interior minister, he will ensure that the roadblocks do not come back.

Imran Khan is lucky to have an ‘incompetent opposition’

Speaking about the opposition, he said, “Prime Minister Imran Khan is lucky to have an incompetent opposition.”

“Prime Minister Imran Khan will complete his five-year term,” he said, adding that those who believe the government will leave “have lost their minds.”

Rasheed reiterated, “We (the government) are not leaving and they (the opposition) are not coming to power.”

Speaking about their constant warnings to mount a no-confidence bid, he recalled that 15 opposition members were missing when the government passed the Finance (Supplementary) Bill 2021 in the National Assembly.

“Now that you’re talking about a motion of no confidence, 25 members are going to be missing,” he said, hitting hard at the opposition’s claims.

The opposition should reschedule its long march

Shedding light on the forthcoming long march announced by the Pakistan Democratic Movement (PDM), he said the leaders of the Organization of Islamic Cooperation (OIC) are coming to Pakistan and will participate in the Pakistan Day parade on March 23. .

“Some of the roads in Islamabad will remain closed on March 21 and 22 as a security protocol for foreign leaders,” he said, urging the opposition to postpone their long march.

Rasheed said they should either hold their long walk four days before or after the OIC meeting.