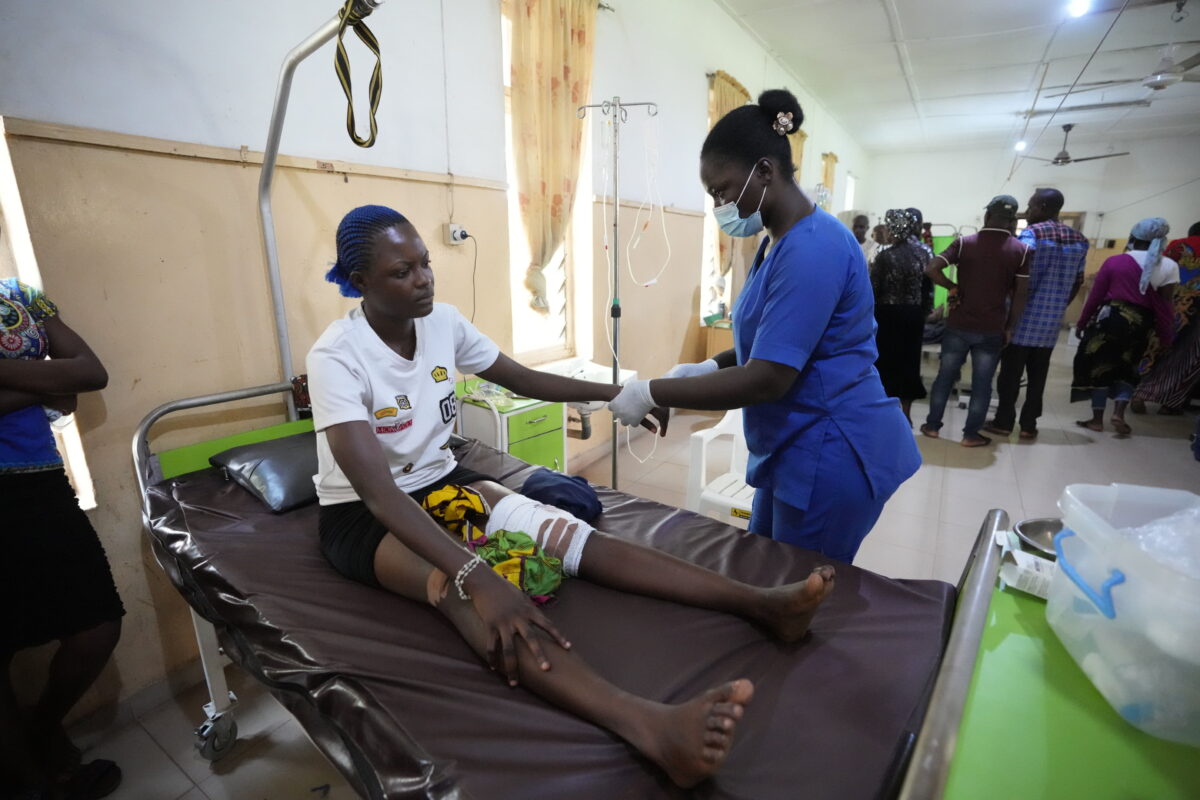 More Christians have been killed in Nigeria since President Joe Biden’s administration declared there were no religious freedom violations in the country in October 2021, watchdogs and leaders say of church speaking to The Epoch Times.

In the first half of 2022, more than 2,543 Nigerian Christians were murdered by Islamists, according to the International Society for Civil Liberties and the Rule of Law (Intercompany).

The figure represents an 8.6% increase from a total of 4,650 Christian murders reported by Open Doors International.

It includes 350 killings by government security forces propagating an Islamic agenda, says the report signed by Intersociety board chairman Emeka Umeagbalasi and five others.

Also included are 140 Christian hostages killed by their Muslim captors.

Analysts speaking to The Epoch Times have called for global action to avert an Islamic caliphate in Africa’s most populous nation.

Last October, US Secretary of State Antony Blinken removed Nigeria from the list of countries of particular concern (CPC), drawing criticism from around the world.

Blinken had ignored recommendations from the US Commission on International Religious Freedom (USCIRF) and global rights groups that were reporting rampant violations in the country.

Nigeria had been nominated the previous year by the administration of then-President Donald Trump on such recommendations.

Nigeria’s delisting means the country has improved its religious conditions and will no longer face sanctions based on it.

“On the contrary, the situation in Nigeria has worsened,” argued five US senators in a memo asking for the redesignation of the country.

“Given the abysmal state of religious freedom in Nigeria, it behooves you to reverse last year’s decision and rename the country as a CPC. The moment demands that you do so without delay,” the memo adds.

The senators cited the recent lynching by blasphemy of Deborah Emmanuel – a Christian student who was murdered in northwestern Sokoto state – and the massacre of more than 40 parishioners at St. Francis Catholic Church, Owo, in southwestern Ondo State.

They also acknowledged the Nigerian authorities’ “repression of religious minorities and the indefinite detention of individuals accused of blasphemy”.

Nigerian Information Minister Lai Mohammed admitted on July 5 that Islamic State terrorists are attacking churches and Christians in the northeast of the country.

Mohammed reiterated claims by genocide deniers that killings in other regions are not religious.

“No one in Nigeria is persecuted, but we have crime problems and criminals really don’t [a] distinction from any religion,” Mohammed told reporters in London.

But Salihu Garba, a native of Sokoto state in northwestern Nigeria, who currently lives in the United States and serves as a minister for the Winning All Evangelical Church in Maryland, told The Epoch Times that Christians are the targets of Nigerian Muslim extremists.

“They occasionally attack nominal Muslims as well as ethnic and religious minorities they perceive to have sympathy for Christians,” Garba said in a phone interview.

On April 2, a popular Islamic cleric in Nigeria’s capital Abuja, Sheikh Muhammad Nuru Khalid was fired by his mosque for condemning the killings.

Khalid, an ethnic Hausa, told The Epoch Times that he was threatened after being fired for his comments.

“But I am not intimidated because the killings are real and I am called to build and not destroy humanity,” he said.

The vice president of the Christian Association of Nigeria (CAN) in the north of the country, Rev. Joseph Hayab, tells The Epoch Times that Mohammed’s prolonged denial of the killings is encouraging impunity in the predominantly Muslim-ruled country. Fulani.

“Nigerian Christians are insecure and live in constant fear,” Hayab wrote in a text message. “Today many pastors are afraid to do pastoral work in certain communities,” he wrote.

Numbers on the rise

Open Doors International, a group that monitors the worldwide persecution of Christiansreported in 2021 that 4,650 Christians – or 80% of the world’s Christians killed for their faith – died in Nigeria.

This means that 13 Christians a day have been murdered according to William Murray, the president of Coalition for Religious Freedom.

A new report from Intersociety says attacks on Christians have increased over the past six months.

“The 2,543 Christian murders or deaths indicated that 14 [Christians] were killed daily and 420 per month,” said the report obtained by The Epoch Times and confirmed by Emeka Umeagbalasi, Chairman of the Board of Intersociety.

The report shows that the top three states include northwest Kaduna with 323 deaths, followed by central Niger (264 deaths). Plateau also in the central region follows closely with 229 deaths.

The figures include 140 murders of kidnapped Christians at the hands of terrorists. Also included are what are said to be 350 religious killings targeted by security forces.

The the numbers could be much highersaid Mark Lipdo, the program coordinator for the Stefanos Foundation, an organization that tracks religious killings in Nigeria.

“Nobody goes out there to cover stories,” Lipdo said.

The Epoch Times has reported how terrorists and officials suppress press freedom through targeted attacks and intimidation of journalists.

Epoch Times reporter Luka Binniyat was the latest journalist to be imprisoned in Kaduna for reporting on the attacks.

Fears of the Islamic Empire

Attacks displacing people across the country are aimed at religious and political domination, Lipdo said.

“Their goal is to create an Islamic empire,” he said.

Garba expressed a parallel opinion: “The plan is to exterminate Christianity throughout Nigeria. Where they don’t succeed with this, they will reduce Christianity to a level where it will no longer be a threat to Islam,” he said.

According to a member of the Nigerian House of Representatives, Solomon Maren, as many as a quarter of Nigeria’s 200 million people have been displaced by radical Islamists in recent years.

“In fact, local governments have been moved,” Maren said in a phone interview with The Epoch Times. “Many communities were taken by the attackers.”

After the brazen attack on Catholic worshipers at St. Francis Catholic Church in the town of Owo in Ondo state, US Representative Chris Smith (RN.J.) noted the significant spread of violence against Christians and the new threats in Nigeria that Can’t be ignored.

“Previously, Ondo had not seen major militant activity, and the attack indicates the southward migration of terror to Christian-majority regions as well as oil-producing areas of Nigeria,” Smith said in a statement. letter to Victoria Nuland, US Under Secretary of State for Foreign Affairs. political affairs.

Former Archbishop of the Catholic Archdiocese of Owerri, the capital of southeastern Imo State, Anthony Obinna told The Epoch Times that several territories in the region had been seized by Islamic militants.

“These areas have become no-go zones for Christians,” Obinna said in a phone interview.

No end in sight

In a June 7 statement, Abia State Governor Okezie Ikpeazu ordered a military raid on forests believed to have been seized by terrorists in the state.

The Prelate of the Methodist Church in Nigeria, Dr. Kalu Samuel Uche, was recently kidnapped near one of the forests known as Isuochi.

“As long as the perpetrators can continue with impunity, there is no sign that there will be an end to the killings,” British MP Baroness Caroline Cox wrote to The Epoch Times.

“There is an urgent need for the Nigerian government and the international community to hold the perpetrators to account,” Cox wrote in a text message.

“Until they do and unless they do, they can be considered accomplices,” she wrote.