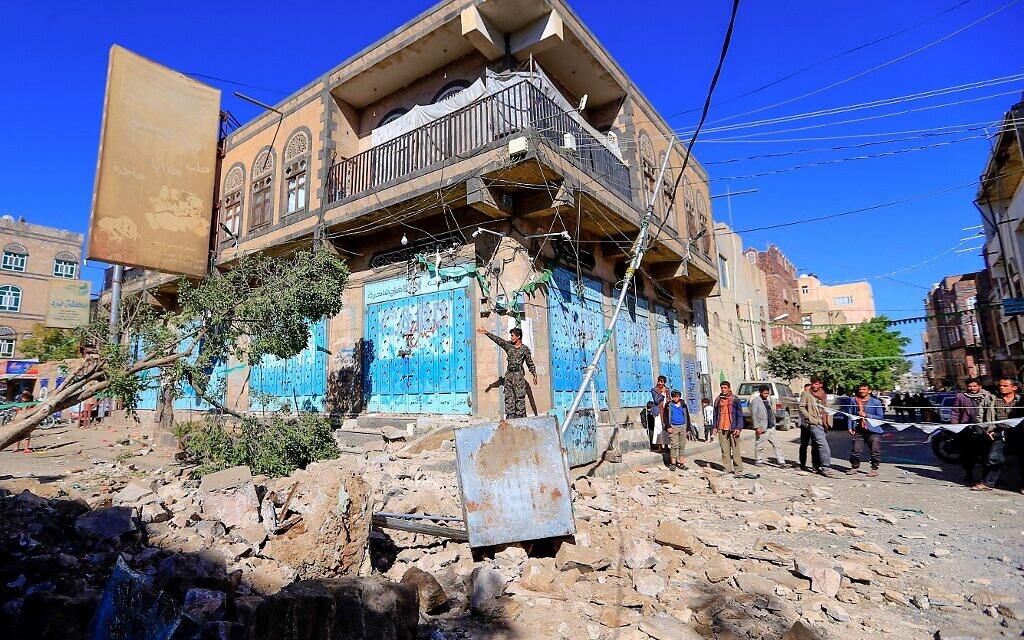 The Saudi-led coalition on Sunday accused Iran and Hezbollah of helping Yemen’s Houthi rebels launch missiles and drones at the kingdom, where two people were killed.

Since the coalition intervened nearly seven years ago to support the Yemeni government, Saudi Arabia has repeatedly accused Iran of providing the Houthis with sophisticated weapons and Hezbollah of training insurgents.

Tehran denies the charges. The Iranian-backed Lebanese terror group Hezbollah has previously denied sending any fighters or weapons to Yemen.

The latest Saudi accusation came as the coalition stepped up a campaign of airstrikes against the Iranian-backed Houthis in retaliation for the deadly attacks on the kingdom.

Coalition spokesman Turki al-Malki told a press conference that the Houthis were “militarizing” Sana’a airport and using it as “the main center for ballistic missiles and drones.” to the kingdom.

Malki showed reporters a video clip which he said depicted “the seat of Iranian and Hezbollah experts at the airport,” where he said “Hezbollah is training the Houthis to trap and use drones.”

Malki showed other clips which he said showed a Hezbollah operative placing explosives in a drone, and a man he identified as a Hezbollah official telling Houthi members, “We need to strengthen our ranks.”

The images could not be independently verified.

Illustration: Members of a tribe loyal to the Houthi rebels raise their arms during a rally against the agreement to establish diplomatic relations between Israel and the United Arab Emirates in Sanaa, Yemen, August 22, 2020 (AP Photo / Hani Mohammed)

The Riyadh-led Arab military coalition intervened in Yemen in 2015 to support the internationally recognized government, a year after the Houthis invaded the capital Sana’a.

Since then, tens of thousands of people have been killed in what the United Nations has described as the world’s worst humanitarian crisis.

The Houthis come from the Zaidite Shia Muslim sect and have their traditional stronghold in mountainous north Yemen.

Between 2004 and 2010, they waged six wars against the then Yemeni government and fought Saudi Arabia in 2009-2010 after storming the border.

The death of two people on Friday night following a rebel missile strike on the Saudi city of Jazan was the first such fatality in the kingdom in three years.

On Sunday, Malki said the international community must “stop the hostile acts of this terrorist organization,” a reference to Hezbollah.

Since January 2018, he said, the Houthis have launched 430 ballistic missiles and 850 drones at Saudi Arabia.

On Saturday, the coalition launched what it called a “full-scale” military operation against the Houthis after the rebel missile strike that hit Jazan.

Rights groups criticized the coalition for civilian casualties in its multi-year aerial bombardments.

The coalition maintains that its operations are conducted in accordance with international humanitarian law, repeatedly urging the Houthis not to use civilians as human shields.

Yemenis inspect a crater following an airstrike reported by the Saudi-led coalition targeting a road in al-Sabeen Square in the rebel Houthi capital Sana’a on December 23, 2021 (MOHAMMED HUWAIS / AFP)

Malki also accused the Iranian ambassador to Sana’a, who died of COVID-19 last week after his evacuation from Yemen, of “leading the planning of military operations in Marib” – the last stronghold of the Yemeni government in the north.

The Houthis warned in a statement that they “will face escalation with escalation.”

World powers and Arab allies in the Gulf Kingdom have condemned the rebels’ deadly strike against Saudi Arabia.

“The Houthi attacks perpetuate the conflict, prolong the suffering of the Yemeni people and endanger the Saudi people alongside the more than 70,000 US citizens residing in Saudi Arabia,” the Washington embassy in Riyadh said in a statement.

Ludovic Pouille, the French Ambassador to Riyadh, offered his condolences on Twitter to the families of the victims of “the barbaric attack on the Houthi”.

Israeli lawmaker Ruth Wasserman Lande (Blue and White) also condemned the attack in a tweet: â€œI stand with the Saudi people against the killing of innocent civilians in the town of Jazan. My thoughts and prayers are with the families of those affected by this terrorist attack! “

I am with the people of Saudi Arabia ???????? against the murder of innocent civilians in the town of Jazan.

My thoughts and prayers are with the families of those affected by this terrorist attack! pic.twitter.com/RwdicC9BHC

The coalition has stepped up its airstrikes on Sana’a, including last week on what it called “military targets” at the airport.

As a result, United Nations aid flights were halted.

The UN World Food Program said it was “forced” to cut aid to Yemen due to lack of funds, and warned of increasing hunger.

For as little as $ 6 per month, you can help support our quality journalism while benefiting from The Times of Israel WITHOUT ADVERTISING, as well as access to exclusive content available only to members of the Times of Israel community.