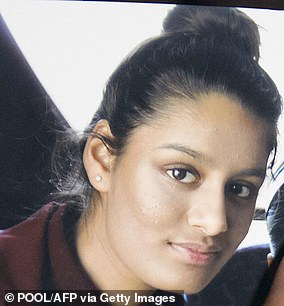 Shamima Begum was 15 when she fled with two other schoolgirls to Syria to marry a Dutch jihadist in 2015. She is accused of trying to recruit others before she left – and of making bad jobs for the Islamic State.

On allegations, she sewed jihadists into suicide vests

“I am ready to go to court and stand up to the people who made these claims and refute these claims because I know I have done nothing in ISIS (so-called Islamic State) other than being a mother and a wife.

“These claims are made to make me look worse because the government has nothing on me. There is no proof because nothing ever happened.

Message for the PM

“I think I could help you a lot in your fight against terrorism because you clearly don’t know what you’re doing.”

She added: “I want them (the British public) to see me as an asset rather than a threat to them.”

Why she went to Syria

Begum said she came to Syria hoping to get married, have children and “live a pure Islamic life”.

“The reason I came to Syria was not for violent reasons.” She added: “At the time I didn’t know that (the so-called Islamic State) was a death cult, I thought it was an Islamic community that I was joining. I received a lot of information on the Internet from people.

On the justification for the Manchester Arena bombing

She said, “I don’t believe one evil justifies another evil. I don’t think women and children should be killed for other people’s motives and purposes.

Begum said it was “not justifiable to kill innocent people in the name of religion”.

If she’s a criminal or a terrorist

She said: ‘Honestly the only crime I think I committed was being stupid enough to come to Isis, and even that can be disproven because I was 15 when I came, and you can’t , you know, judging a 15-year-old for making a mistake that he very quickly regretted making.

‘If you really think I did this, why don’t you take me back and put me on trial, and hear my side of the story.

“If you honestly believe this, don’t you think I should go to jail for this.

“The fact that you think I should rather rot here, than stand trial…the democracy you live in says everyone deserves a fair trial.”

On her new western look

She said, “I haven’t been wearing a hijab for maybe over a year now. I took it off for me because I felt very cramped in the hijab, I felt like I wasn’t myself.

“And I feel like it makes me happy not to wear the hijab. I don’t do anything for anyone but myself.

“I had many opportunities to let people take pictures of me without my hijab, but I didn’t.”

On the decision to withdraw his citizenship

Asked what she would say to Sajid Javid, who was Home Secretary when Begum’s UK citizenship was revoked, Begum replied: ‘I understand why he took my citizenship away from me, that it It’s his job to think of the UK’s best interests before anything else.

“What he saw in the media was not the real me. If he were to meet me himself, I’m sure he would change his mind about my citizenship.

Begum said she was groomed and exploited, believing she would enter an “Islamic paradise”.

She said: “People I was talking to online just, they created this image for me about heaven, an Islamic heaven.