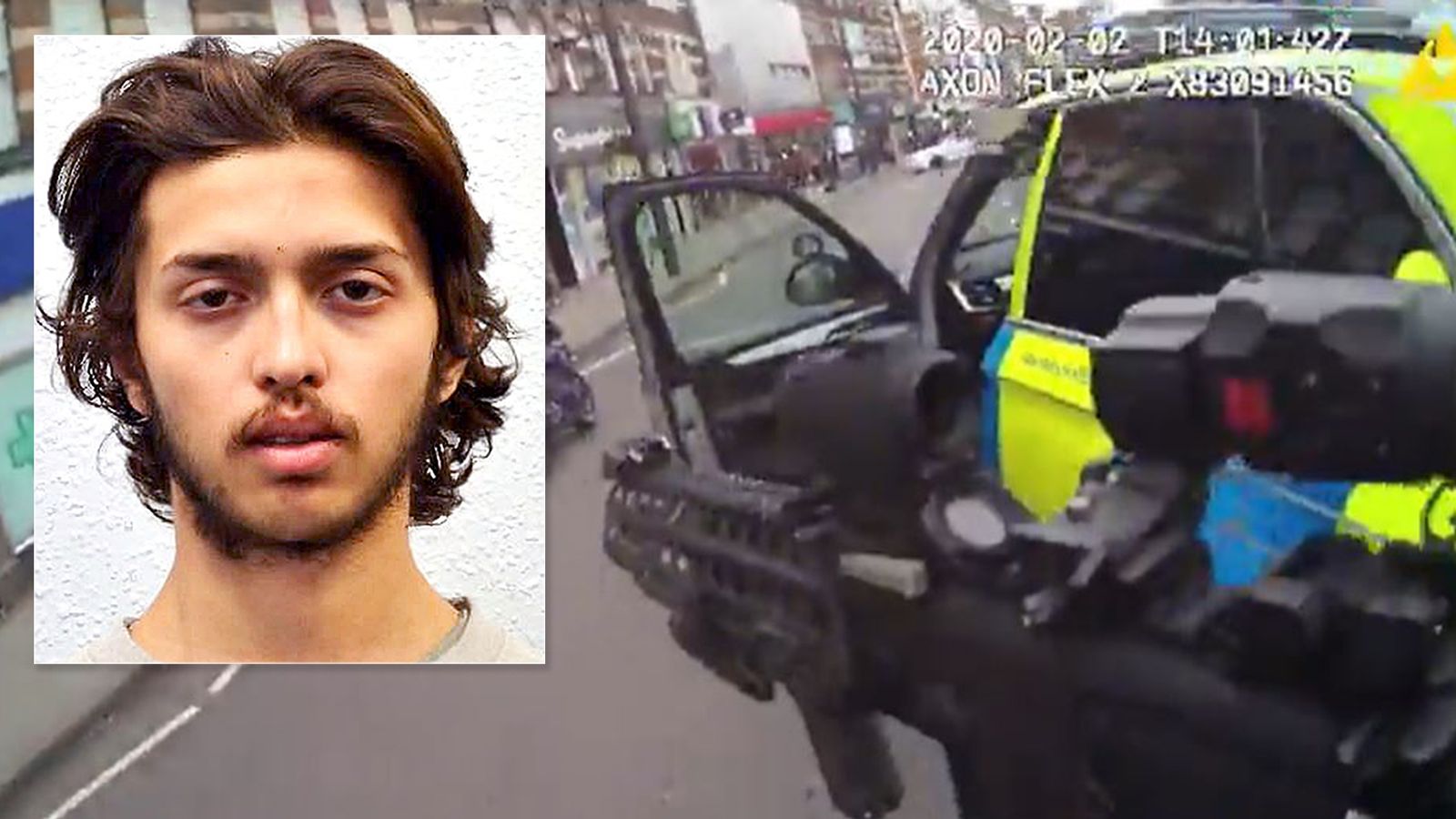 An undercover surveillance agent described the split-second decision to open fire on the Streatham terrorist attacker on a busy shopping street.

The officer, known only as BX75, said during an investigation he expected to see Sudesh Amman cutting off people’s heads and I saw him run down Streatham High Street towards him.

Amman, 20, from Queensbury, north London, had grabbed an 8-inch kitchen blade from the Low Price hardware store display and stabbed two passers-by in the attack February 2 of last year.

He had been released from Belmarsh prison 10 days earlier after serving half of a 40-month sentence for obtaining and distributing terrorist material, and had been placed under surveillance.

On that day, he was being watched by nine members of the MO3 surveillance branch of the Metropolitan Police, one of them carrying what appeared to be a Waitrose bag.

One of the officers, BX75, described how he heard a colleague say on the radio, “He’s stabbing people.

“My immediate thought was that Mr. Amman was killing people a few yards in front of me,” he told the inquest.

“I expected to walk up there and see him stab people, cut off their heads. That’s what immediately occurred to me.”

He said he was worried about his coworker who was only armed with a Taser and was worried it might not work because Amman was wearing thick, heavy clothes.

“I was scared for his life and wanted to protect members of the public. I immediately pulled my Glock pistol from my hip, just pulled up my jacket and grabbed it,” he said. .

The officer described the scene, occupied by shops, pubs and bus stops.

“It was a normal Sunday beforeCOVID afternoon, “he said.

As he looked up and drew his pistol, he saw Amman running towards him, less than 10 yards away.

“He had a large butcher’s knife, a silver blade at least eight inches long. He held it in front of him as he ran. It was not hidden in any form,” he said. .

“I saw him, he saw me, and I’m 100% sure we met our eyes. I thought he was going to stab me and kill me or certainly hurt me very seriously.

“I would have had my pistol in a double grip handle. I could see Mr. Amman running towards me, I stopped and had a split second to shoot Mr. Amman.”

The shot was aimed at Amman’s chest but missed and went through a window of a Lidl supermarket behind him.

Amman ran past the officer and followed him with his pistol.

But he told the inquest: “It was my assessment that he still posed a serious threat to any member of the public.”

The officer said he believed that Amman was going to “stab me, attack my colleague, attack anyone who came out of Boots without knowing what was going on outside or turn around and run into Boots and continue his attack”.

“I was convinced he was making a decision on who to attack on the spot,” he said.

“I would like to think I said something to him like ‘stop the police, drop the knife’ – but I have no recollection of it.

“He was so close to me with the knife that I was immediately scared for my life. I shot his chest, one blow.”

His colleague, BX87, fired at almost the same time but there was no reaction from Amman.

“Mr. Amman remained standing where he was, I saw no visible reaction from him, nothing at all, the threat was still there, he was still exactly the same threat to me as before so I fired a second hit and then reassessed again and it started to fall, it fell to the ground, ”said BX75.

“He dropped the knife or the knife fell out of his hand,” he added, and his colleague stepped forward and kicked him back.

At that point, the white JD plastic bag on his front moved off his chest and he saw the tops of orange plastic bottles wrapped in silver foil and tied to a waistcoat.

“I took them for a viable improvised explosive device,” he said. “I shouted words to the effect of ‘vest’ or ‘device’.”

“Mr. Amman was still moving, his arms fluttered from side to side and his legs were cycling up and down. But soon after, he stopped moving,” he added.

BX87 told the inquest he thought he was alone and did not realize his colleague was standing to his left with his handgun drawn.

Describing the confrontation with Amman, BX87 said: “I thought he was going to stab me, attack me, try to kill me. I fired a shot aimed at his main chest.

“Nothing changed. I was constantly shouting ‘Drop the knife, drop the knife.’ I fired a number of more shots, still aimed at the central body mass. I thought I was still alone at this. Stadium.

The audience was told that BX87 fired three shots, as did BX75, but only two hit Amman.

BX87 said he intended to give Amman first aid, as he had been trained to do, but as he pushed the knife back he heard his colleague yelling about the potential suicide vest.

He said: “I saw it for just a fraction of a second, I thought it was an explosive device. I immediately reacted, I thought I was potentially going to blow myself up with something. that is.”

The officer stepped back, put on a mask and police cap, and began to back members of the public into storefronts and cars, before being relieved by armed officers in uniform.