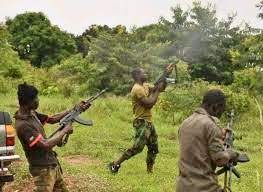 Terrorists attack a farm, kill a soldier and kidnap

Some terrorists killed a soldier and abducted a Zimbabwean, including two farm workers working in the town of Anchau, Kubau local government area Kaduna State.

According to a source, security guards are currently combing the nearby bushes for the abductees.

Details of the incident were sketchy at the time this report was filed.

Neither the state government nor the state police command confirmed the attack.

A local union said at least 50 people had been abducted by the bandits in the past three days.

Locals believed Ansaru members to be lesser evils than bandits who kidnapped people for ransom, looted property, or killed those who showed little resistance to their excesses.

The villagers were recently attacked by bandits who laid siege to the farming community as part of a “revenge mission” following last week’s clash with Ansaru terrorists in the area.

The terrorists, who were protecting communities from bandits, had left the area days after a deadly clash with bandits left casualties on both sides.

Sources said Ansaru fighters had moved to Danmusa communities in Katsina state and parts of Zamfara and Sokoto states.

“It is not yet clear if they have finally moved or if they will seek reinforcements and return in the next few days,” a native of the area said yesterday.

It was learned that most of the relocated residents passed through Unguwar Gajere to Layin Dan’auta where the district chief lives.

The source said: “Right now the bandits are in charge and having a blast attacking our people.”