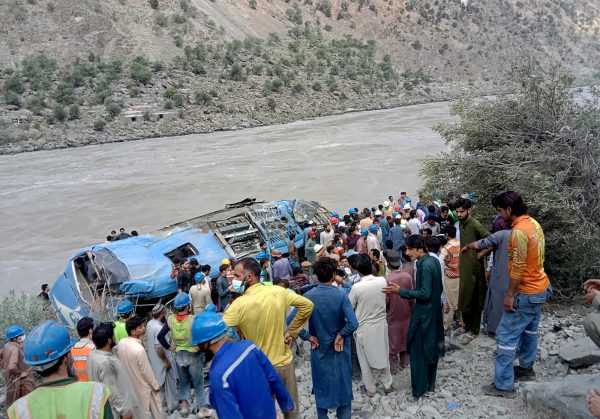 Local residents and rescue workers gather at the site of an attack on a bus carrying Chinese and Pakistani construction workers to the Dasu Dam project in Kohistan in Pakistan’s Khyber Pakhtunkhwa province on July 14, 2021.

On July 14, nine Chinese nationals and three Pakistanis were killed and 28 others injured when a bus carrying them to a construction site plunged into a ravine in the Upper Kohistan region of Pakistan’s Khyber Pakhtunkhwa province. The bus had picked up Chinese workers and engineers from a camp in Barseen and was heading to a tunnel under construction of the $ 4.2 billion Dasu hydroelectric project – a 233-meter-high dam being built on the Indus River , seven kilometers upstream. from the city of Dasu.

Initially, Pakistan’s foreign ministry called it an accident caused by a “mechanical failure,” but its Chinese counterpart described it as a bomb attack.

A high-level Chinese delegation has arrived in Islamabad to join the ongoing investigation into the explosion of the Dasu bus, which allegedly targeted employees of a Chinese construction company.

The 15-member team, led by Wu Wei, deputy director general of the Department of External Security Affairs of China’s Foreign Ministry, visited the site of the blast, was briefed on the investigation, and received a presentation. of the new security plan by the Pakistani army over the past two days.

An intelligence officer told a group of reporters that a four-vehicle convoy left the closed compound on the morning of July 14. When he reached the main road, a vehicle loaded with explosives entered the convoy and hit the first bus. . There was an explosion, but no bullet holes were found on the vehicles or the remains of IEDs located at the site.

The Pakistani Foreign Ministry’s initial perception of the incident was apparently based on first impressions. The terrorists had used homemade explosives without ball bearings or shrapnel, which caused only a blast effect, forcing the vehicle to lose balance and plunge into the ravine. It was therefore perceived as an accident.

The intelligence official said CCTV footage recovered from the Barseen camp captured the attacker’s vehicle. He said there were only two such vehicles registered in Kohistan, neither of which was used in the attack. So the car was coming from outside the neighborhood.

Learn about the story of the week and develop stories to watch from across Asia-Pacific.

The investigative team also recovered the assailant’s body and sent his DNA for identification.

The Dasu hydropower project, which will generate more than 4,300 megawatts of electricity when completed, is part of the $ 65 billion China-Pakistan Economic Corridor (CPEC) investment plan, which includes the construction of a grid railways, roads and pipelines between the two countries. , and is led by China Gezhouba Group Corporation.

This is not the first time that Chinese-funded projects in Pakistan have been targeted. In April, Tehreek-e-Taliban Pakistan (TTP) claimed responsibility for a suicide bombing at the Serena Hotel in Quetta where the Chinese ambassador was staying. He escaped the attack unscathed.

Interestingly, the TTP denied any responsibility for the Dasu incident. However, the militant dress, which is banned in Pakistan, said it was investigating the involvement of one of its factions.

In the aftermath of the latest terrorist incident, the Chinese construction giant behind the Dasu project suspended local employment contracts. The decision was, however, withdrawn after a uproar on social media, and a new notification was published declaring the July 16 directives null and void.

The intelligence source said security at the hydropower plant is being tightened up and could lead to contractual changes.

Although the Beijing Global Times published an editorial strongly supporting Islamabad, the recent increase in attacks targeting security personnel and foreigners is worrying, especially for China’s Belt and Road Initiative and investments in Pakistan. .

Pakistani army spokesman Major General Babar Iftikhar has linked the growing number of terrorist incidents and attacks against security forces and foreigners to the worsening conflict in Afghanistan. In an interview, he denied the presence of organized terrorist infrastructure in the country and insisted that “the leadership of all these [terrorist] networks are sitting across the border [in Afghanistan] and have the support of [Indiaâ€™s spy agency] Research and Analysis Wing (RAW) â€.

The ISPR spokesman said the country had witnessed at least 167 terrorist incidents since May 1 of this year. He added that security forces arrested 42 militants in more than 7,000 intelligence-based operations, cordon and search operations and area domination operations following the attacks.

As the United States and NATO end their ground presence in Afghanistan and the Taliban seize more territory, the fighting in the country is escalating day by day. In the midst of the chaos, Pakistan has a daunting task to deal with the spillover of violence.