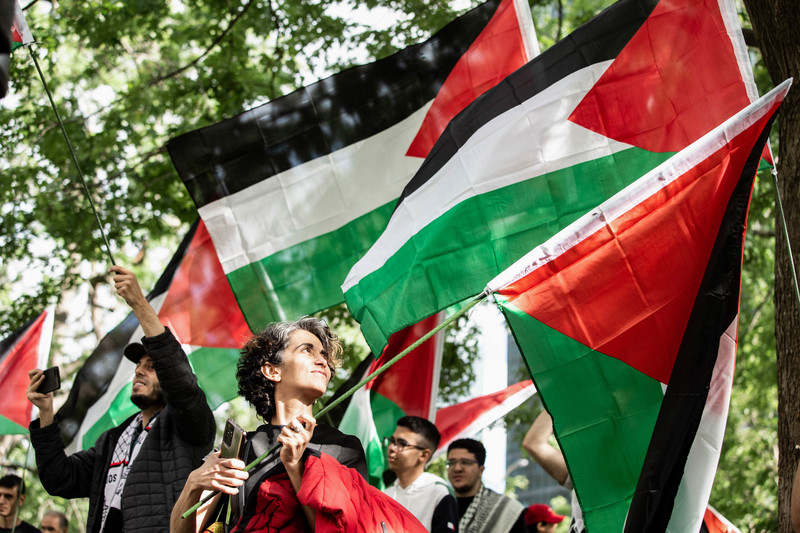 We can now add grocery shopping to the long list of seemingly mundane activities that rampant Zionist repression makes difficult for Palestinians.

Whatever Barakat expected to find that evening, there was no prominent photo of his face on the front page of the Canadian conservative newspaper national post. Yet there it was all the same: an article titled “The Strange Story of Khaled Barakat” written by Terry Glavin with a large photo of Barakat sitting on the newsstand.

The national post also published the article online under the modified title “Is Khaled Barakat part of a terrorist group or is he the victim of Israeli intimidation?”

Barakat told The Electronic Intifada that upon seeing the article, he felt angry that such harassment was possible, and at the anti-Palestinian racism and Islamophobia it reflected.

“I felt angry that they could do this with such impunity. If I had been a white person – or even a Jewish person, even with the same politics – they would certainly have thought twice. And they were also trying to paint that as a huge story and use our faces in a way that creates fear in the community – especially when you see ‘Khaled Barakat’ in all caps with the image,” he said. declared.

Barakat said the article, which described him as ‘a high-ranking member of a Palestinian terrorist organization‘, was a clear attempt to ‘criminalise’ his writings and activism, as well as broader support for the resistance Palestinian and Lebanese army to the violence of the Israeli state. .

Barakat also spoke about the absurdity of the situation. The general nature of the article gave the impression that someone had paid money to take it down rather than an organic attempt at journalism.

And the article seems to rely on sensationalism rather than substance. Glavin spends the entire article collating tenuous claims about Barakat’s supposed ties to the Popular Front for the Liberation of Palestine (PFLP) and allegations targeting Samidoun: Palestinian Prisoner Solidarity Network, an international organization that advocates for the release of imprisoned Palestinians.

It offers literally no evidence for these claims other than the blatant designation of Israeli war criminal Benny Gantz of Samidoun as a terrorist organization and various unsubstantiated allegations presented by Israeli intelligence officials.

Other Canadian activist organizations such as Independent Jewish Voices were quick to point out the complete lack of support for the demands.

As a radical decree, Gantz’s naming was by its very nature unsubstantiated, much like the quotes Glavin peppers throughout his recent article. The quotes offer no proof, no hard evidence, no direct corroboration of anything other than the fact that Canadian and Israeli intelligence and “Jew advocacy” groups (in reality, nationalist organizations Israelis) like the B’nai B’rith don’t like what Barakat has to say.

B’nai Brith previously petitioned Prime Minister Justin Trudeau urging him to deport Barakat, while the The national post published another article earlier this year quoting a high-ranking Canadian lawmaker demanding an explanation as to why the Trudeau government allowed Barakat to live in Canada despite his alleged links to the PFLP. Canada’s “terrorist” list and official anti-Palestinian biases are used to persecute Palestinians in the country.

(Davide Mastracci, site editor Passage, argues that the majority of Canadian media, toeing the official line of the country’s government, takes a pro-Israel, anti-Palestinian stance. Critics of Israel are downplayed or omitted entirely, while the erasure and dehumanization of Palestinians becomes commonplace.)

Indeed, it results in a repetitive, redundant and intimidating chorus of harassment intended to target and silence a shameless supporter of Palestinian liberation.

This is also the larger pattern by which the so-called “counter-terrorism” protocol has resulted in the sole reliance on the unsubstantiated opinion of an “intelligence insider” to flesh out an unproven “link” accusation. with a criminal organization.

Substandard journalistic practices are a cultural extension of targeted racialized harassment with little or no due process practiced by government agencies. This has already been reflected in various US cases such as the LA Eight, the Holy Land Five, the deportation of resistance icon Rasmea Odeh, and many others.

The flip side of all this is a kind of “security mystique” produced by nationalist, conservative, and even liberal writers who portray intelligence agencies as cutting-edge, infallible specialists whose methods should be spared questioning but whose vaguer inclination to suspicion should be thoughtlessly translated into disenfranchising policies and actions.

This “security mystique” legitimizes rogue government harassment of individuals and organizations with anti-Zionist policies when there is little or no evidence for such claims, as was the case with the Holy Land Five.

It is crucial to understand Glavin’s article as the latest part of a larger censorship campaign directed against Barakat by Zionist organizations and publications and imperialist governments.

June 13, The post of Jerusalem published an article on Barakat’s position that Canada’s terrorism list should be abolished. The article, which also cites Glavin as a source, however, did not explore Barakat’s argument, but simply cited individuals smearing Barakat for his political beliefs and baselessly argued his affiliation with the PFLP.

The article uses the unsubstantiated opinions of pro-Israel “experts” – those from Glavin, those from the Israeli Embassy and those from the Center for Israel and Jewish Affairs – who express outrage at the way Barakat was able to speak at an International League of Popular Struggles (ILPS) in Ottawa which took place on June 5th.

It’s another call to impose censorship based on political opinion via unsubstantiated allegations of ties to Palestinian resistance organizations and political parties, often listed as “terrorists” by Canada, the United States or the United States. ‘European Union.

This speaks to the broader recyclability of these claims and efforts. As Palestinian activist and blogger Rima Najjar told The Electronic Intifada: [The Jerusalem Post] slanderous article on Khaled Barakat, I was struck by the similarity in tone, style and approach to the Canary Mission hack on many activists.

Najjar declared both Canary Mission and The post of Jerusalem want to “pass off as legitimate journalism ‘investigating hate’ but they’re basically doing hogwash” and want to slander anyone they perceive as “a threat to Israel’s legitimacy”.

Najjar elaborated further on how the choice of words revealed his political bias, pointing to the title – which describes Barakat as a “Canadian linked to the PFLP” and only in the body calling it “alleged”.

“Barakat is ‘linked’ to the PFLP, an organization on Canada’s terrorist list; ergo Barakat himself is a terrorist and should not talk about liberation struggles. The newspaper accuses Barakat of having had the temerity to question the principle on which the Canadian terrorism list is established, which makes no sense in terms of protecting Canada and Canadians and is rather an expression of the Canada’s alliance with Israel and other oppressive regimes.

“They played with the wrong person,” he told The Electronic Intifada.

He said he wouldn’t be intimidated like others have been.

“I have spent the last 20 years fighting the so-called terrorist list and the deportation of refugees and immigrants. So when you say ‘you’re a terrorist, we’re going to deport you’, it doesn’t work with me.

Omar Zahzah is the Education and Advocacy Coordinator for Eyewitness Palestine, as well as a member of the Palestinian Youth Movement and the American Campaign for the Academic and Cultural Boycott of Israel.