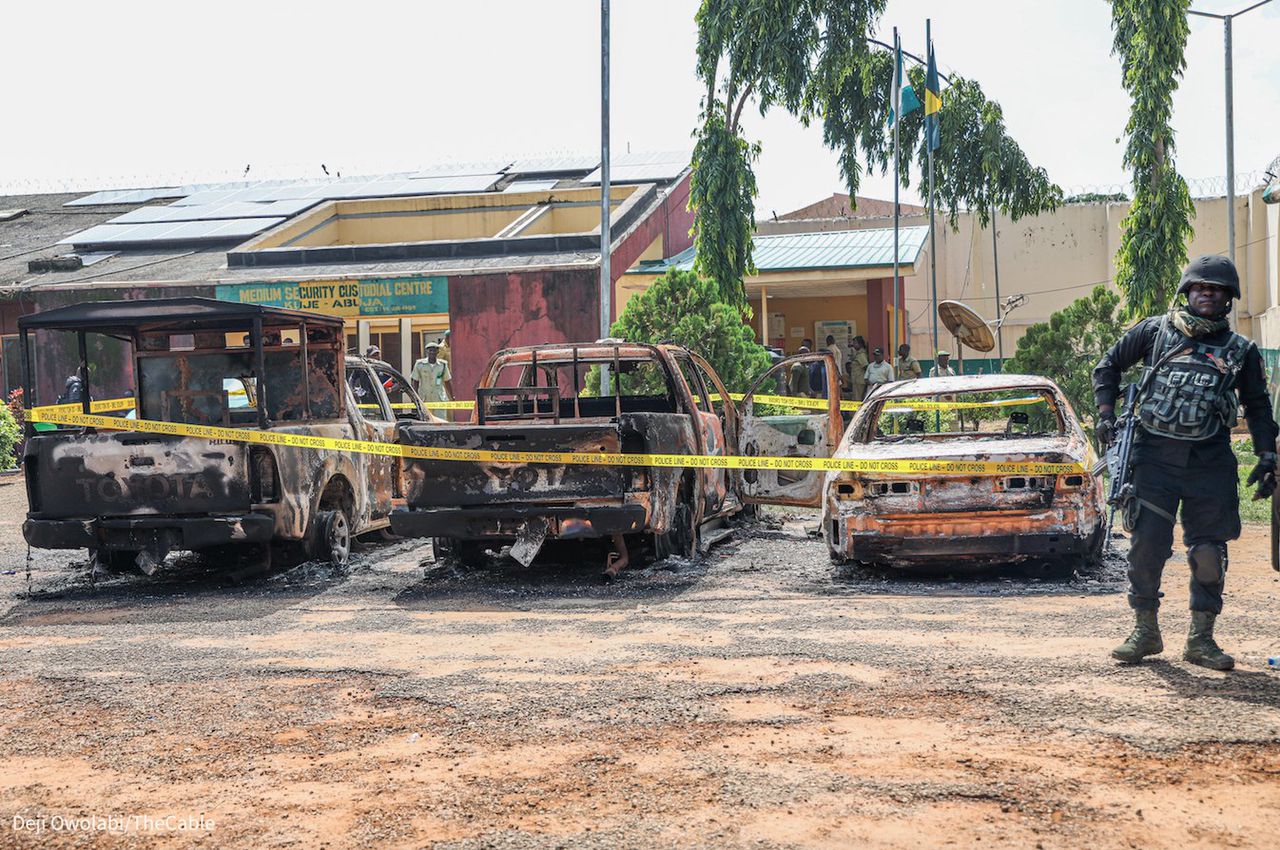 That terrorists and bandits are getting bolder, more daring and more sophisticated is not debatable. After a period of relative peace, the nation has entered a new phase of terrorist attacks that are a direct challenge to state power. He needs no further evidence after last Wednesday’s attack on Kuje Correctional Facility. That the nation is in a state of war is no longer in dispute when non-state actors target, with the utmost audacity and recklessness, the convoy of our president (the commander-in-chief of the armed forces) to disrupt our chain of command and control.

These two events, occurring within days of each other, speak volumes about the intent and coordination of our enemies. The choreographed attacks are proof of the sophistication and cunning of terrorists in challenging our power structures with no regard or respect for the sanctity of the symbols of power – the presidency and prisons. This is a group of determined terrorists, not opportunistic bandits.

This latest upsurge in terrorist attacks and banditry is symbolic of failed intelligence, an aversion to planning, compromised law enforcement and the lack of operational capability of security apparatuses and law application. This is indicative of the rot in the system that must be decisively addressed for our collective good. The success rate of these attacks is becoming alarming. The ability of bandits and terrorists to move from attacking soft targets to boldly and ambitiously attacking symbols of state power speaks volumes about their changing modus operandi.

Previously, they were busy capturing, mutilating and killing villagers at remote borders and in ungoverned spaces without border controls. Now they are boldly attacking trains and airports in Kaduna, shooting planes with surface-to-surface missiles, attacking military barracks and killing soldiers at will, attacking a correctional center at the center of power and recklessly attacking the presidential convoy .

This recent attack marks an era in Nigeria’s fight for its heart and soul. The direction we take from now is important and must shape our collective future. How we match this shifting paradigm of bandits and terrorists will define our collective future. The audacity with which terrorists and bandits challenge the authority of the state and the ordinary functioning of its coercive apparatus is unimaginable. This catastrophe is a symptom of an imminent danger, which we must collectively confront in a non-partisan, multidimensional and non-sentimental way.

The unusual security breaches of the past week have highlighted just how exposed and vulnerable we are. Enough is enough. A feeling of insecurity in the country is now pervasive. And the ups and downs of the country are victims of their shadow. Right now, terrorism and banditry are winning. Both have changed our way of life and push us to the limits where people resort to helping each other to protect themselves and their loved ones.

Traveling to certain parts of the country by road is generally risky and going to churches and mosques is dangerous and a suicide mission in some areas. Going to the farm is a safe trip there for some farmers in parts of Nigeria. Living in Nigeria has become an existential crisis, and we still deal with the situation nonchalantly. Daily activities, existence and survival have become a mirage for some Nigerians, and there seems to be no hope.

The combination of insecurity of this kind with the crushing economic difficulties in Nigeria caused by local and international factors is devastating. Most Nigerians have never had it so bad, and never have we felt so insecure and uncertain about our future as we do today. Imagine how the people of Abuja would feel now. It is unbelievable that terrorists were able to besiege and destroy Kuje prison in an operation that lasted almost 3 hours without a corresponding repelling force from our security officers. What would be the fate of the inhabitants if these terrorists and bandits had decided to operate in the cities or the residential districts of the metropolis? You can’t even imagine the carnage. This is the reality of Nigeria today.

The violation of the National Security Act 1990, as amended, seen in the events of this week, requires an effective response from the government, the security ecosystem and the citizens of Nigeria. Details of the incidents are still being released, but the existing reports are heartbreaking and disturbing. The attack on the Kuje Medium Security Custodial Center of the Nigerian Correctional Service (NCS); was a development that left at least 879 inmates fleeing police custody. In addition, at least five people died when they were attacked by terrorists, including more than two hundred on motorbikes, who not only bombed the Kuje medium security detention center in Abuja, but also opened the facility so that detainees, including incarcerated terrorists, can escape.

Among those injured in the attack were a Nigerian Security and Civil Defense Corps (NSCDC) officer attached to the facility and three staff from the Nigerian Correctional Service. At the same time, terrorists killed four detainees who allegedly tried to escape. Meanwhile, as shock and apprehension follow the attack, the Islamic State in West Africa Province (ISWAP) has acknowledged the attack, claiming responsibility.

Worryingly, attacks on prisons by terrorists and bandits have increased in recent times. The security at the Kuje Correctional Center was caught out and caught off guard, which is lamentable. The attempts and recurrent attacks are enough signals to prompt the government to strengthen security in the country’s correctional facilities. The fact that the terrorists carried out the attack in the capital, under the jurisdiction of the authority of the central government, is a spit on his face.

The second incident is even bolder. First, news broke that the ubiquitous “bandits,” by design or accident, had besieged an advancing President’s convoy. The convoy was heading to the president’s village to prepare the ground for him to pass Salah to Daura, his home town. The bandits opened fire, and the president’s men returned fire and defended the convoy. Some staff members were injured and others died. I sympathize with the victims and families of both incidents.

The symbolism of these attacks is obvious to contemplate. First, these criminals can attack anywhere and anytime they want and are brazenly daring. Moreover, no one is forbidden to them. By attacking Citizen Convoy Number One, they sent a clear message that they can hit anyone.

Moreover, they have declared a conventional war on Nigeria using asymmetric methods. It’s guerrilla warfare, for lack of words to describe it. And they have sown terror in our collective consciousness. If they can reach Kuje Correctional Facility and the President’s convoy, they can catch anyone. Gradual audacity and daring signal a change in approach that requires a corresponding response. Finally, they have violated Nigerians’ sense of security and created a perverse cloak of insecurity in remote towns and villages of Nigeria.

There is a need to create counter-symbolism and narrative to reduce the impact of these symbols and strengthen our collective psyche to confront, hinder and defeat terrorism and banditry in all their ramifications. These new symbolisms must be created from the actions and reactions of government and the security community to confront the existing terror-inspired symbols that dominate our consciousness.

It is the responsibility of the government to protect the life and property of the citizens and to create an atmosphere of tranquility and security in the country. The lessons of the Kuje terrorist attack and the bandit attack on the presidential convoy are obvious to all. We need to stop treating insecurity sentimentally and as if nothing had happened. The breeding of hydra-headed monsters can consume us all if we don’t do something now.

It is “a swim or drown situation”, and Nigeria has no choice but to swim at all costs.
Beyond the collective shame, the feelings aroused by these attacks go beyond mass hysteria and feelings of insecurity, but also contain inciting substances to further embolden terrorists and bandits in Nigeria. We are now in the midst of turmoil of insecurity and chaos, asking for nothing but the full attention of the government. Such a response requires a radical security strategy and emergency operations to warp Nigeria’s webs of insecurity and terror. The threats facing us go beyond maintaining a docile posture. Government and security agents must wake from their slumber and be vehemently prodded with concerted firmness to quell security threats.

There didn’t seem to be any serious consequences for the bandits’ and terrorists’ minor transgressions, so they became major transgressions. Civilian homes, police stations and military bases have all been attacked with no clear consequences for the attackers. The rhetoric should go beyond repelling attacks to prevent such attacks. government and security architecture celebrate repellent attacks on presidential convoys, prisons and military bases. What would ordinary Nigerians who have no protection do or celebrate when attacked?

It now sounds pusillanimous to the ears of weary and frightened Nigerians when the government and its security agencies speak of bravery in repelling terror and bandit attacks. Nigerians want permanent solutions to prevent and end attacks on the Nigerian state and its citizens.

With fear in the air and a sense of desperation in the face of insecurity, the calls are coming from the usual places, especially among governors asking for a license to arm citizens to defend themselves. As unbelievable as it may sound, it is a call for survival and a testament to the fact that people are beginning to lose faith in the government to fight insecurity. A vigilante-type protection system can emerge from the apparent collapse of security when it becomes a Hobbesian natural state of every man for himself, and life becomes “lonely, poor, mean, brutal, and short” because that individuals are in a “war of all against all”. We must avoid this state because Nigeria cannot afford to fail, and it will cost too much.