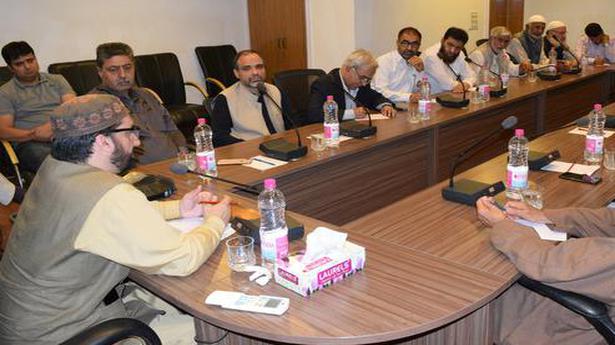 Center banned Jamaat-e-Islami and JKLF under the UAPA. The ban was imposed in 2019.

A ban under the strict Illegal Activities (Prevention) Act (UAPA) could be imposed on the two factions of the breakaway conglomerate Hurriyat Conference, which has led the separatist movement in Jammu and Kashmir for more than two decades, said responsible.

They said a recent investigation into the granting of MBBS seats to Kashmiri students by institutions in Pakistan indicates that money collected from aspirants by some organizations that were part of the Hurriyat Conference conglomerate was being used to fund organizations. terrorists in the territory of the Union.

Officials said the two factions of the Hurriyat are likely to be banned under section 3 (1) of the Illegal Activities (Prevention) Act or the UAPA, under which “if the government central is of the opinion that an association is, or has become, an illegal association, it may, by notification to the Official Journal, declare such an association illegal. They said the proposal was raised in accordance with the Centre’s zero tolerance policy against terrorism.

The Hurriyat conference began in 1993 with 26 groups, including pro-Pakistani and banned groups like Jamaat-e-Islami, JKLF, and Dukhtaran-e-Millat. It also included the People’s Conference and the Awami Action Committee headed by Mirwaiz Umer Farooq.

The separatist conglomerate split into two factions in 2005, the moderate group being led by the Mirwaiz and the hard line led by Syed Ali Shah Geelani.

So far, the Center has banned Jamaat-e-Islami and JKLF under the UAPA. The ban was imposed in 2019.

Officials said an investigation into terrorist group funding revealed the alleged involvement of secessionist and separatist leaders, including members and cadres of the Hurriyat Conference who colluded with active militants of banned Hizb terrorist organizations. -ul-Mujahideen (HM), Dukhtaran-e-Millat (DeM) and Lashkar-e-Taiba (LeT).

Executives have raised funds at home and abroad through various illegal channels, including hawala, to fund separatist and terrorist activities in Jammu and Kashmir, they said.

Funds raised were used to disrupt the Kashmir Valley by throwing stones at security forces, systematically burning schools, damaging public property and waging war on India as part of a criminal plot , they said.

Supporting arguments for banning the two factions of the Hurriyat Conference under the UAPA, officials cited several cases related to terrorist financing, including one under investigation by the National Investigation Agency ( NIA) in which several of the conglomerate’s executives were arrested and imprisoned. .

Many second-tier executives from both factions have been in prison since 2017, they said.

Another case that is likely to be cited to ban the two factions from the Hurriyat Conference is that against PDP youth leader Waheed-ur-Rahman Parra, who allegedly paid Geelani’s son-in-law 5 crore for keeping Kashmir. . in turmoil after the death of Hizbul terrorist commander Mujahideen Burhan Wani in 2016, officials said.

The NIA alleged that after the death of Wani, who was killed during a meeting with the military in July 2016, Parra contacted Altaf Ahmad Shah, aka Altaf Fantoosh, and asked him to ensure what the valley remains boiling. with generalized unrest and stone strikes.

In addition, Counter Intelligence (Kashmir), a branch of the CID Department of Jammu and Kashmir Police, recorded a case in July last year following reports that several unscrupulous people, including some Hurriyat leaders, were hand in hand with education consultants and were selling Pakistan based MBBS seats and admission to other professional courses at various colleges and universities.

At least four people, including Mohammad Akbar Bhat alias Zaffar Bhat, self-proclaimed president of the Salvation Movement which is part of the moderate Hurriyat Conference, have been arrested in the case.

It is alleged that members of the Hurriyat conference “sold” MBBS seats in Pakistan to Kashmiri students and used the money collected, at least in part, to support and finance terrorism.

During the investigation, it was revealed that the individual leaders of the Hurriyat had their quota of seats which were sold to people seeking MBBS and other professional degrees in one way or another, said. the responsibles.

Officials said the evidence showed the money had been “invested in channels that ended up supporting programs and projects relating to terrorism and separatism, such as payment for organizing rock bombings.” Citing a survey, officials said the average cost of an MBBS headquarters in Pakistan was between ₹ 10 lakh and ₹ 12 lakh. In some cases, fees were reduced on the intervention of the Hurriyat rulers. Depending on the political weight of leader Hurriyat who intervened, concessions were given to aspiring students, officials said.