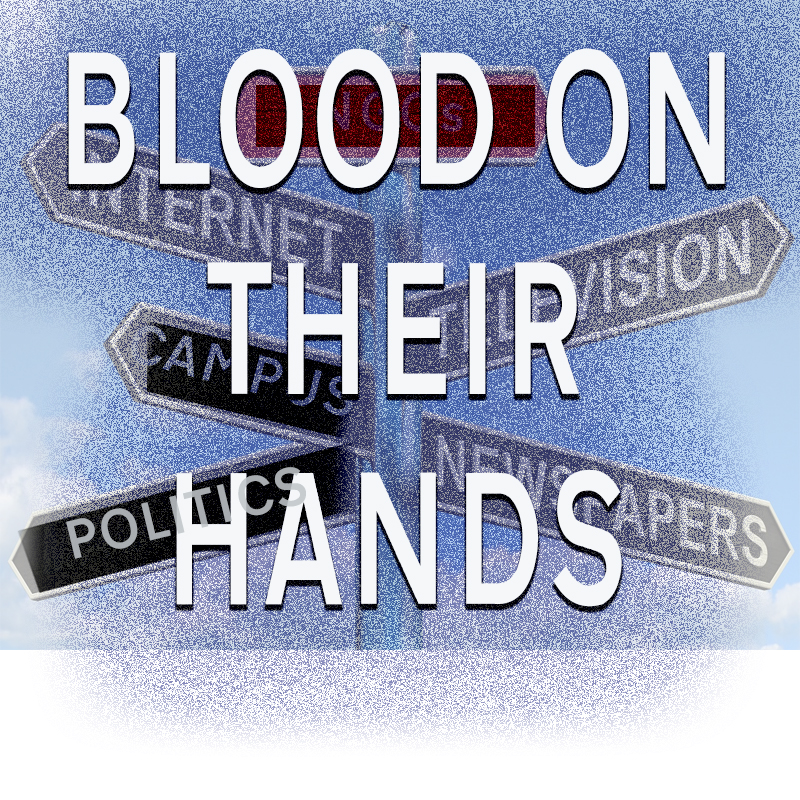 Photo credit: courtesy of the author

Throughout the anti-Zionist militant space (and that includes the media, academia, politics and NGOs) there are people who portray Zionists as sub-human evildoers. The lies these people tell and the hate they spread have consequences in the real world. These people have innocent blood on their hands.

Blood is flowing in the streets of Israel

Last month, fourteen israelis were assassinated by Arab terrorists. Let me start with the obvious statement: those directly responsible for the terrorist attacks in Beersheba, Hadera, Bnei Brak and Tel Aviv are the terrorists who carried out the brutal massacres.

But terrorism is never as simple as a man with a gun. Nobody just wakes up in the morning and thinks they should go and slaughter civilians – unless they’ve been prepared to do so in an ideologically twisted environment. Terrorists still believe that their horrific crimes are justified.

And this key fact is so relevant when talking about Israel. Because behind the bullets and the knives, behind those who slaughter innocent civilians on the streets of Israel, even behind the radical Islamist terrorist groups – there is a well-oiled industry of Jew hatred – with international factories producing material without end that enables, empowers, and provides justification for monsters who wish to kill Jews.

Millions of people far removed from the current conflict zone are also consuming this hatred – and continue to spread and promote demonizing lies and propaganda about Israel. Ultimately, all of this anti-Jewish misinformation combines to create a perverse atmosphere that justifies the killing of innocent Israeli civilians.

This does not mean that without the lies and constant demonization there would be no terrorism against Israelis at all, but there would certainly be far less. Things have gotten so twisted these days that radical Islamist terrorist groups often perform in front of Western audiences.

And we all understand this concept, wherever we sit on the political spectrum. When Jo Cox was murdered, the finger of blame was pointed far beyond Thomas Mair. And when Patrick Wood Crusius slaughtered 23 people in a shooting in El Paso, Texas, The New York Times wasted no time in reporting. blame the atmosphere created by Donald Trump.

The Israel-hating Guardian understands cause and effect all too well, often referring to the hate-filled atmosphere that contributes to deadly violence – but just like the NYT (which is also guilty of demonizing Zionism ), they can only see this link when there is political mileage for them:

“Far-right terrorists feed on hatred often stirred up by elites when it suits them.”

Given that the Guardian is one of the UK’s most notable outlets, obsessed with Israel, spreading disinformation and demonizing Zionism, a complete lack of self-awareness has rarely been more apparent than in the quote above. .

There are players in this industry that we are already pointing the finger at. PAs pay to kill, which encourages and rewards acts of terror against Israel, is perhaps the most frequently cited example. Let’s face it, if you’re actually rewarding terrorists and their families, you can hardly pretend you don’t have blood on your hands.

But the truth is far darker and involves far more than those who promise terrorists and their families financial security.

What about those in the West who promote the Palestinian Authority as moderates (the PA is behind pay to kill)? Or the nations that fund the PA – or fund UNWRA – the UN organization that was created to perpetuate the conflict and which actually uses classrooms to teach Palestinian children anti-Jew hatred.

Or we can look much closer to home. Because the enemies of the Jews are constantly hungry, there are a myriad of NGOs, journalists and activists (all pretty much the same these days), putting a microscope on the Jewish state and subjecting it to to an inspection that no nation on earth would survive. To help them, Palestinian children are dutifully sent to confront the soldiers, with the stone throwers behind – and 100 cameras all trying to capture the most deceptive angle.

Almost every article about Israel, every report, that emerges in the West these days is rooted in biased reporting and willful fiction.

Take Amnesty International. The NGO has spent decades demonizing the State of Israel. Just recently they wrote a report falsely claiming that Israel practiced “apartheid”. Go online and you’ll see their report shared as “truth” in every social media thread about Israel.

But the Amnesty report is nonsense. Amnesty’s internal news supply chain is full of Palestinians who have nothing but a long history of promoting extreme anti-Israel rhetoric on their CVs. One of their key employees, who was even present at the press conference that launched the report, used to have images of Palestinian terrorists on his Facebook profile.

Too many Amnesty staff are obsessed with Zionism and Israel, even though they are employed elsewhere to be the eyes of the NGO. All of these prejudices are absurd, frightening and clearly rooted in anti-Jewish racism and this means that everything Amnesty’s factory produces is tainted with deep-rooted anti-Semitism.

Which leaves Amnesty International spreading malicious and demonizing fake news about the character of Israel. Lies that are explicitly created to move people. Amnesty publishes these lies precisely to incite anger.

Fact: – Terrorists murdered more civilians in pre-1967 Israel in the two months since Amnesty’s apartheid lie than in many years. Chance? – Maybe.

A world full of lies

To misunderstand the conflict and to misunderstand Israel’s enemies is no defence. Ignorance motivated by obsessive anti-Semitism is no excuse. Amnesty has invested vast resources in publishing hate and spreading the lie that the only democracy in the MENA region is an evil regime. You would have to be stupid to pretend that these lies have no consequences in the real world.

At the most basic level – donations provide a clear example – people who believe lies are more likely to donate to a cause bearing the Palestinian flag than those who don’t. Gaza beggars who use Facebook to connect with activists to receive help “to feed their children” are more likely to be rewarded. Very little of the money that gets into Palestinian hands is actually used to improve lives – tragically, the opposite is true – it is almost entirely used to bolster the very hate industry that creates fake news that led to the donation in the first place.

There is little doubt that the level of violence would decrease considerably. Once you eliminate the hate industry that has sustained and fueled the violence, the whole conflict collapses. How many lives would that have saved? From all sides? Innumerable.

But the opposite is true. Watch what’s happening online. Israelis are demonized and portrayed as “evildoers” using the same type of language always reserved for Jews. The “Zionists” are “varmints”, “sub-humans”, “monsters” and only “evildoers”.

This does not happen in a hidden secret group. Israelis are transformed into evil sub-human monsters on our campuses. State-funded environments in the 21st century in which Jews often feel the need to hide their identity. And in our schools, religious groups and unions. Some artists are even getting involved – making sure their fans are “telling the truth” about what the “Zionists” are doing. Then there is the social media cesspool. So – with Ukraine – does everyone recognize “Russian propaganda”? Where have they all gone in the last decades?

The support this generates on the streets spills over to the conflict itself – not to normal Palestinians living in Ramallah or Jericho – but to the militant space – those who spread the lies in the first place. An activist like Mohamed El Kurdish probably can’t believe his luck. He can say anything – no matter how outrageous – and people will swallow his lies and cheer him on – they even pay him thousands of pounds to show up on campus to tell students in person .

From Trocaire in Ireland to CAABU in the UK or SJP in the US. They are all involved. And this even before we mention the “solidarity groups” such as the PSC, the SPSC, the IPSC or the JVP.

The same goes for politicians who are obsessed with Israel and regularly share hate media such as Mondoweiss and Electronic Intifada with their constituents. These people push this anti-Semitism into the streets and deeper into the societies in which they live – where it acts like a virus.

This is partly caused by the elephant in the room. The rise of Islamism in the West and the impact it has on our streets. Islamists regard Israel as “Islamic land” and are engaged in a religious battle to reclaim it. There are MPs in Westminster today who would dare not challenge the growing Islamist influence in their constituencies and the rhetoric of these politicians is becoming increasingly anti-Zionist. And what happens in Westminster is only a fraction of what happens at council level in some areas. We see it best on campus, where the new president of the NUS pushed anti-Jewish genocidal rhetoric in the past. She is just one of many extremists active in our universities today. This is a subject that too few want to discuss openly.

This normalization of anti-Jewish hatred in the West may not have directly committed the recent acts of violence that killed 14 Israelis. But ffrom Amnesty and the BBC to the NYT – they all play their part in demonizing Zionism. So when the atmosphere they help shape results in the death of Israelis, then they all have innocent blood on their hands.