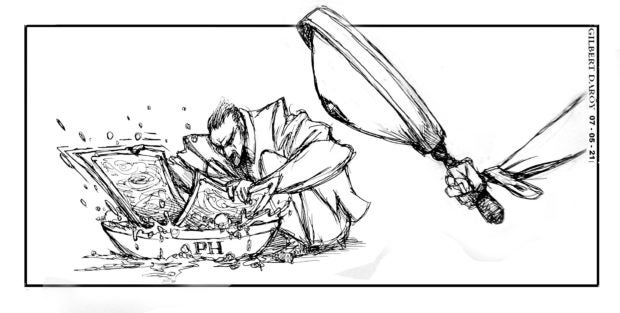 The Philippines is back in the so-called “gray list” of countries under increased international scrutiny, due to inadequate policies and laws on money laundering and terrorist financing and against money laundering. ‘silver. It joins countries like Pakistan, Haiti, Malta and South Sudan in the disreputable list.

This is a sad development, given that the country has had so long to comply with the demands of the Financial Action Task Force (FATF), an intergovernmental body created in 1989 by the Group of Seven industrialized countries. The body sets the standards and monitors the implementation of necessary measures to combat dirty money across the world and other threats to the international financial system.

The Philippines was first blacklisted by the FATF as a “non-cooperating country” over 20 years ago. It was struck off in 2005 following the creation of the Anti-Money Laundering Council (AMLC) by the law of the Republic 9160 (anti-money laundering law). It was on the verge of being blacklisted again in 2012, but was saved by the passage in Congress of RA 10168 (the Law on the Prevention and Suppression of Terrorist Financing). Earlier this year, the Philippines was again warned that it was at risk of being included in the “gray list,” but Congress passed RA 11521 to strengthen the country’s anti-money laundering law on January 29, two days ago. only before the FATF deadline.

Inclusion in the “gray list” is a warning for a country to comply with recommended reforms within a given timeframe, or to be blacklisted and face financial sanctions from the 39 member countries of the country. FATF. The sanctions include restrictions on trade payments and financing, as well as on remittances, even for Filipinos working overseas, which would have a potentially huge impact on the Philippine economy given its reliance on remittances. of OFW.

The AMLC said the country must address 18 action points to be removed from the list. The Philippines is expected to submit progress reports to the FATF three times a year, with the first due in September. The 18 measures refer to various desired immediate outcomes or key anti-money laundering and terrorist financing objectives that a country should be able to achieve to demonstrate effective enforcement of laws and regulations. relevant.

The AMLC stressed that the sustained commitment of the government and law enforcement agencies to implement the 18 action plans on time would be essential for the country’s removal from the list. It therefore becomes imperative for all government agencies involved to deliver on the action plans that concern them, and for the government to crack the whip on these agencies to ensure the accomplishment of their deliverables. “The Philippines will be removed from the ‘gray list’ once all action plans are successfully completed, hopefully no later than January 2023,” said Bangko Sentral ng Pilipinas Governor Benjamin Diokno.

One of the concerns previously raised by the International Monetary Fund related to the conflicting functions of the state-owned Philippine Amusement and Gaming Corp. as the operator and regulator of casinos. Another unresolved issue is the need to amend the old bank secrecy law.

According to Senator Panfilo Lacson, the inclusion of the Philippines this year in the FATF “gray list” could again be a call to amend the law to finally tackle a major source of corruption. Since his first term as a senator in 2001, according to Lacson, he had repeatedly introduced a bill aimed at removing the protection of the privacy of government officials and employees. In the 18th Congress, Lacson introduced Senate Bill 26, which sought to deprive officials of the protection afforded by RA 1405 prohibiting the disclosure or investigation of bank deposits as a rule. The bill is still languishing in committee.

This is where the problem lies. The requested amendments would mean closer scrutiny of public officials and their finances, as well as those who hold the country’s intertwined economic and political levers. Are Filipino lawmakers and other national leaders up to the task of passing tougher laws that will require greater transparency on their part? Will they succeed in overcoming their narrow personal interests and toughening the rules in time to save the country from the international ignominy of the FATF “blacklist”?